The AFL-CIO, National Women's Law Center and CWA delivered 15,000 petition signatures to the German Embassy on Tuesday, urging the German government to use its shareholder power to press T-Mobile to abandon a company policy that silences workers who speak out against sexual harassment.

"No one should have to decide between keeping their job and staying safe," said AFL-CIO Secretary Treasury Liz Shuler. "But that unfortunate choice is put to working women under T-Mobile's current practice of silencing workers who come forward with sexual harassment claims. Today, we are calling on the German government as a major stakeholder to hold T-Mobile accountable and demand they protect workers' rights and women's equality."

"U.S. workers have a basic right to speak out and challenge sexual harassment and discrimination in the workplace without fear of facing retaliation or losing their jobs," said Emily Martin, vice president and general counsel at the National Women's Law Center. "By threatening employees who talk publicly about sexual harassment or other workplace abuses, T-Mobile's gag order policy violates this right. Indeed, T-Mobile's policy threatens workers to remain silent or risk their job. We hope that the German government, as a major shareholder of T-Mobile's parent company, will urge T-Mobile to quickly reform its practices to respect workers' voices and obey the law." 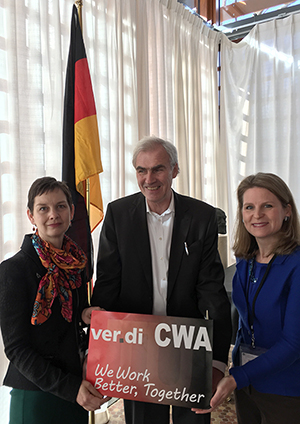 The German state owns about 32 percent of Deutsche Telekom, T-Mobile's German parent company. In August, the National Labor Relations Board (NLRB) found T-Mobile guilty of violating the rights of Angela Agganis, a former T-Mobile customer service representative. Agganis had reported unwanted and inappropriate sexual advances from her supervisor, and T-Mobile responded by pressuring her into signing a non-disclosure agreement and threatening to fire Agganis if she discussed the situation with her coworkers. Not wanting to be silenced, she resigned and contacted her union, TU. Together they went to the NLRB.

But T-Mobile only had to withdraw its employee gag order policies at its call center centers in Maine and South Carolina. Because the rest of T-Mobile's 46,000 employees still don't know these non-disclosure agreements violate U.S. labor law, Agganis created two petitions to intensify pressure on the company to make nationwide reforms. Since then, union members, workers' rights activists and community allies have delivered petition signatures to T-Mobile's corporate headquarters in Bellevue, Wash., and the German parliament in Berlin, Germany.

"I know I did the right thing. If my struggles can help just one person – prevent one person from having to go through what I did – it's worth it," Agganis said.