In a groundbreaking victory, a majority of AT&T In Home Expert (IHX) workers in North Carolina chose to join CWA, becoming the first state in the Southeast where IHX workers have formed a union. They join IHX workers in New York, New Jersey, Maryland, Michigan, Illinois, Nevada, and Arkansas in building power with hundreds of thousands of workers at AT&T to fight for a voice on the job.

CWA District 6 members at Lumen (formerly known as CenturyLink) are ramping up their mobilization efforts to build power at the bargaining table as they continue to negotiate a new contract. The workers, who are members of CWA Locals 6312, 6300, 6373, and 6311 in Missouri, have been fighting for a fair contract since March. The members have overwhelmingly rejected two previous tentative agreements that did not include adequate wage increases that matched the rising inflation and did not provide any hazard pay for the many hours they worked during the pandemic. The workers are mobilizing by writing letters to the CEO and participating in phone banks demanding a fair contract.

CWA Local 1080 members at the Union County Division of Social Services in New Jersey have ratified a new four-year contract. The contract covers more than 350 members working in the County’s Division of Social Services as social workers, clerks, paralegals, and other positions. Their previous contract expired in June 2020. The members have been actively mobilizing by flooding County Commissioners’ meetings, picketing at lunchtime, and wearing red every Thursday to win a fair contract. The new contract includes wage increases, the addition of Juneteenth as a paid holiday, alternative scheduling, dedicated rooms at each of the three social services locations for workers to conduct personal business, and more.

Bergen County Board of Social Services

After 20 months without a contract, Bergen County Board of Social Services employees, members of CWA Local 1089, have ratified a new contract. The bargaining team reached an impasse during negotiations. However, the members ramped up their mobilization and built political pressure on County officials to continue negotiating a fair contract. They organized multiple marches, engaged the media and the public, flooded County Board Members with emails, and turned out to several County Commissioners’ meetings. The new three-year contract includes increased wages, an immediate healthcare re-opener to re-negotiate possible savings for members, a one time waiver for healthcare contributions in November 2022, and more. 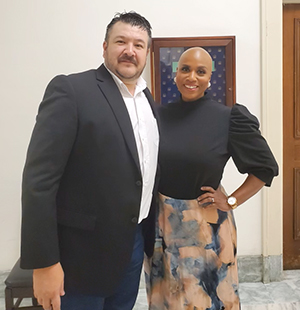 Juan Sanchez, a Committee for Better Banks member from Wells Fargo, with Rep. Ayanna Pressley (D-Mass.) after she demanded at a hearing that Wells Fargo remain neutral in workers' organizing efforts.

Last week, Wells Fargo workers from the Wells Fargo Organizing Committee traveled to Washington, D.C., to meet with lawmakers ahead of the U.S. House Financial Services and U.S. Senate Banking Committees’ hearings on holding megabanks accountable. The workers, who are organizing as Wells Fargo United, a campaign with the Committee for Better Banks-CWA, urged lawmakers to demand that Wells Fargo respect workers’ rights to organize by refraining from union busting and change its toxic internal work cultures that harm workers and consumers. Despite being repeatedly asked by multiple lawmakers, including Sen. Sherrod Brown (D-Ohio), Rep. Ayanna Pressley (D-Mass.), and Rep. Cindy Axne (D-Iowa), Wells Fargo CEO Charles Scharf, who was one of the bank CEOs who appeared before the Committees, would not commit to not interfering in the workers’ efforts to organize a union. "If there had been a union at Wells Fargo, then perhaps the toxic policies and behaviors driving these scandals would not have gone unchecked for so long,” said Rep. Pressley during the hearing. In a statement following the hearing, the Wells Fargo Organizing Committee said, “Mr. Scharf’s refusal once again to commit to not interfering with our effort to organize a union by remaining neutral shows not much has changed at Wells Fargo since its fake account scandal in 2016, and that’s exactly why we’re fighting for a union and voice on the job. Mr. Scharf can commit to ‘follow the law,’ but until he commits to supporting Wells Fargo’s essential workforce by respecting our right to organize a union, he cannot and will not fix the bank’s toxic culture.”

The Indiana AFL-CIO hosted a labor walk for IUE-CWA Local 84913 member Justin Sparazynski, who is running for Penn Township Board Member in St. Joseph County, Ind. Sparazynski is a long time activist with IUE-CWA’s political program, an Iraq and Afghanistan War veteran, participant in the CWA Veterans for Social Change program, and if elected, would be the only union member on the board.

In Louisville, Ky., IUE-CWA Local 83761 Political Action team members ran a Political Action Fund drive at their local and collected over 430 cards and raised over $67,000 in new annual contributions.

In a win for members of United Campus Workers/CWA at the University of South Carolina (CWA Local 3765), the University Administration approved a plan to raise the minimum wage to $14 an hour and address compensation and reclassification for hundreds more employees. This win is the result of the long-time effort by the members. In 2021, United Campus Workers/CWA of South Carolina launched a campaign to raise the minimum wage across the University system. While the raise in the minimum wage is a great start, there is more to be done. The cost of living continues to rise and many university employees will continue to struggle as they have been so far behind for so many years, without a history of consistent yearly cost-of-living raises, and the University has been chronically underfunded. The members are dedicated to continuing to advocate for living wages, dignity, and the rights of all workers across the University system. 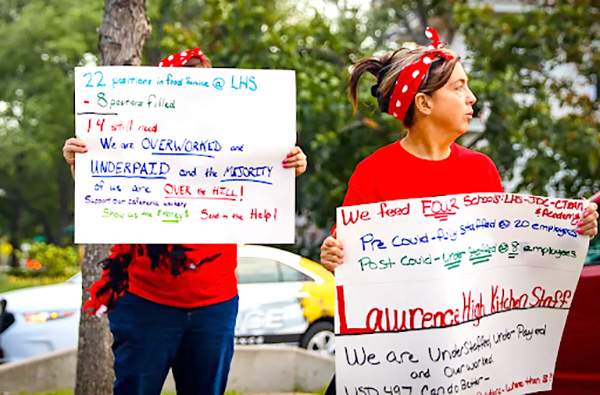 Members of the Personnel Association of Lawrence (PAL)-CWA (CWA Local 6400) rallied during the Lawrence (Kansas) High School homecoming parade to call attention to staffing shortages. There are currently more than 70 open, classified staff positions, with food service and paraeducators being some of the hardest-hit job classifications. Lawrence High School kitchen staff members say they are exhausted, and they are each doing the jobs of four or five people. “We love our students. We can’t give them the kind of education they deserve when our classrooms and kitchens don’t have staff because our wages are so low,” said Hannah Allison-Natale, PAL-CWA President.

CWA Local 1101 members in New York rallied outside Con Edison headquarters in response to the energy giant’s attempt to bust the union by threatening to move jobs to non-union contractors. The workers were joined by members of CWA Local 1102, other union members, and elected officials.

“USIC workers perform a vital service to survey and inspect underground electric wiring and gas mains for ConEd. These unionized workers protect our street safety and, in turn, unions protect them. New York is a union town and will not compromise for non-union utility locators,” said Comptroller Brad Lander at the rally. The CWA members urged Con Edison not to put short-term profits ahead of workers and firmly reminded the company that the expertise and experience of union workers is needed when dealing with underground systems that could potentially cause electrical outages or gas main explosions if not managed correctly, putting workers and residents at risk. “I’ll tell you right now, as a lifelong customer of Con Edison, I am disgusted with what they are trying to do,” said CWA Local 1101 President Keith Purce. “There could be a gas explosion, or an electrical outage, hospitals going out of power just because they wanted to hire cheaper labor.” 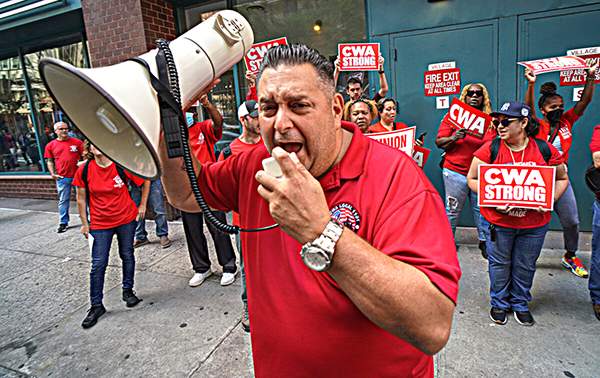 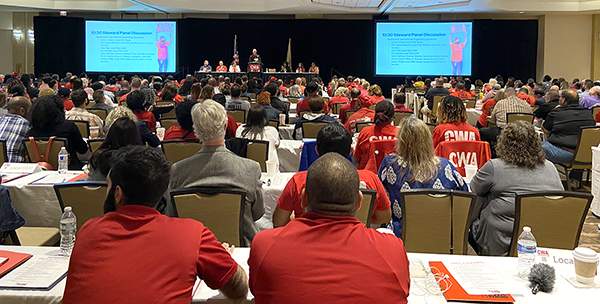 Last week, more than five hundred CWA District 1 Shop Stewards gathered for the first in-person New Jersey Stewards Conference since 2019. The attendees participated in several sessions to help strengthen their skills by learning about new tools for mobilizing, organizing strategies, political action, and more. In addition, the conference served as an opportunity for this group of dedicated union activists to connect, learn from each other, and get re-energized to get back to their locals and build power with their fellow CWAers.

Hispanic Heritage Month began on September 15. As part of its yearly celebration of Hispanic and Latino leaders who are shaping the labor movement for the future, the AFL-CIO featured CWA Local 7026 Secretary-Treasurer Cecilia Valdez. Cecilia has been a longtime activist and a CWA member for more than 40 years. Born in Tucson, Ariz., Cecilia is a member of Local 7026, where she has served as Secretary-Treasurer for the past 23 years, chair of the local's Committee on Equity and coordinator of the CWA HOPE Golf Tournament, which supports the Elizabeth Glaser Pediatric AIDS Foundation. In addition, she has been serving as Vice Chair of the Pima Area Labor Federation since January 2022.