On Monday, workers at Maximus, who are organizing with Call Center Workers United/CWA, announced the launch of a new solidarity fund to support their fight for better working conditions. The fund was launched with hundreds of thousands of dollars in initial pledges to aid workers at different Maximus call centers if they ever need to go on strike, without jeopardizing their housing or ability to cover critical expenses like medications.

Workers at two of Maximus’ largest call centers went on their first-ever strike on the anniversary of the Affordable Care Act in March to protest Maximus’s anti-union campaign and demand pay parity with other federal contractors. In May, workers at some sites staged a two-day strike to call for more affordable healthcare and higher wages. CWA members, other union members, and community allies, who have stood in solidarity with Maximus workers throughout their organizing campaign, are making individual contributions as a show of continued support. Click here to make a contribution and help strengthen the power of workers at Maximus.

Hannah Borstel, a Consultant at Verizon Express in Portland who is organizing with her co-workers to form a union with CWA, was the featured guest for 90.7 FM KBOO’s Labor Radio program. In the episode which aired on Monday, Hannah explained why she and her co-workers are organizing a union including the working conditions that led the workers to want to organize and fight back. During the interview, Hannah also highlighted how being part of the national wave of organizing among retail workers who face similar challenges has been inspiring for her and her co-workers to keep the fight going. Hannah ended her interview by calling on community members to support the workers’ organizing efforts and sharing the various ways they can do so through social media and other means.

Workers overseeing the tech infrastructure and business operations of The Atlantic announced they are forming a union with The NewsGuild of New York (TNG-CWA Local 31003). Their union covers 130 workers including data scientists, analysts, software engineers, product managers, project managers, assistants, designers, and employees of the in-house creative studio, sales and marketing department, and customer care department. Workers are calling for more equity and diversity in the workplace, fair compensation, and meaningful professional development and growth opportunities for employees, particularly junior staff. Workers are also calling for a stronger say in the company’s digital and revenue strategy, particularly when it comes to advertisers. The tech and business workers will be joining their colleagues on the editorial team, who won voluntary recognition and joined The NewsGuild-CWA in June 2021.

Workers at the Tender Claws game studio announced last week that they are forming the Tender Claws Human Union-CWA. All of the eligible workers have signed union authorization cards, and management has agreed to recognize TCHU-CWA.

Workers at the Everett Herald formed the Everett NewsGuild, part of the Pacific Northwest Newspaper Guild (TNG-CWA Local 37082), to represent the newsroom workers at the Washington state publication.

Workers at Orchard Park Veterinary Medical Center, who have been fighting for a voice on the job for themselves and their animal patients, voted last week to join CWA Local 1168.

Workers at the Star Tribune, members of the Minnesota Newspaper and Communications Guild (TNG-CWA Local 37002), ratified a new contract earlier this month. The wage increases the workers gained in the new contract are the highest at the Star Tribune since 2006, before the company entered bankruptcy. In addition to the wage increases, the new contract also includes a one-time bonus payment, increased paid parental leave, paid wellness days, and the addition of MLK Jr. Day as a paid holiday. The workers were highly involved throughout the six weeks of negotiations, helping them win one of the best contracts for newsroom workers in recent years.

Close to 200 workers at Southern Poverty Law Center (SPLC) overwhelmingly voted to ratify their first contract. The contract covers workers at eleven SPLC offices in five states. The workers, who are members of the Washington-Baltimore News Guild (TNG-CWA Local 32035), stayed committed through more than a year-and-a-half of bargaining. Highlights of the contract include wage increases, just cause protections, 401(k) retirement benefits and matching employer contributions, paid holidays, parental leave for birth, fostering, or adoption, bereavement leave, paid leave to accommodate gender affirming care, and a remote and telework agreement.

CWA President Chris Shelton joined President Joe Biden for a roundtable on the importance of passing the CHIPS Act to promote domestic production of semiconductors and create good jobs in the United States.

“The CHIPS Act is a key component of both creating good jobs here in the U.S. and strengthening our ability to compete with China,” Shelton said. “Passage of this bill is going to drive a huge amount of investment in semiconductor manufacturing across the country. It will result directly in tens of thousands of jobs to help grow a key component of our manufacturing sector.”

“Passing the CHIPS Act is an important first step toward creating good, union jobs in a competitive U.S. semiconductor manufacturing sector,” said Carl Kennebrew, President of CWA’s IUE-CWA Industrial Division. “Semiconductors are essential for everything from appliances to cars to medical imaging devices to fighter jets. We are ready to build on the expertise of our members and help secure the supply chain for these critical components.”

The Worker Power Coalition, a group of more than forty major labor unions and progressive organizations including CWA, launched a new national campaign pushing for a U.S. Senate vote on the Protecting the Right to Organize (PRO) Act. The increased pressure comes as workers across the country, like Apple retail workers who are organizing with CWA, experience illegal union-busting intimidation tactics from corporations. Under the PRO Act, these tactics would carry heavy penalties. The coalition also released a new national letter to Senate Majority Leader Chuck Schumer and Senate Democratic leadership that underscores the urgency of holding a Senate vote.

“We must do everything possible to support the growing number of workers who are joining together to improve their workplaces. Our labor laws are outdated and broken. Employers flagrantly violate workers’ rights, hold mandatory anti-union meetings, and intimidate and even fire workers for organizing,” said CWA Secretary-Treasurer Sara Steffens. “Workers need for the Senate to pass the Protecting the Right to Organize Act now so they can organize for safer jobs, better working conditions, and higher pay.”

Last week, CWA members in Florida held a rally and press event urging Republican Senator Marco Rubio to vote for the PRO Act. The CWAers were joined by other union allies, activists, and community members to demand that Rubio—who has a history of consistently voting against working people—stand with working families by supporting this vital piece of legislation that would put the power back in the hands of Florida’s workers. 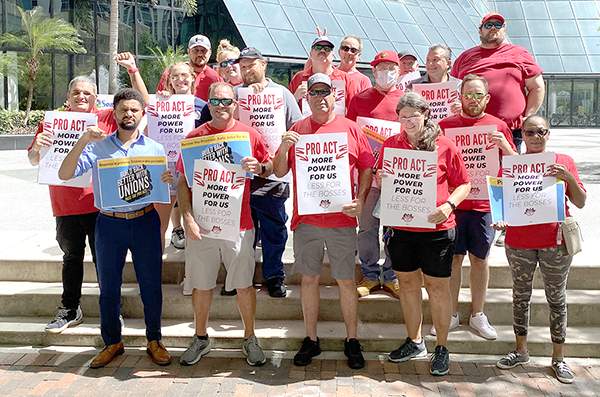 CWA Next Generation Members Gearing Up for Fall Elections

More than 30 CWA members joined CWA Next Generation this month for a crash course in mobilizing for Election Day 2022. The online political briefing provided a look at upcoming challenges and opportunities with National Political Director Cory Medina and National Legislative and Political Field Director Yolanda Bejarano. District 4 Vice President Linda L. Hinton and other mentors in the CWA Next Generation program also joined the briefings.

According to Medina, if key pro-worker legislation such as the PRO Act is going to escape death in the “Senate graveyard,” members must help elect Democrats in eight critical states, including Arizona, Florida, Georgia, Nevada, North Carolina, Ohio, Pennsylvania, and Wisconsin. He emphasized that governors’ races and contests for state attorneys general and secretaries of state are more important this year than at any time in recent memory, because the winners of those races will set the rules for the presidential election in 2024.

Both Medina and Bejarano talked to members about the power of member-to-member contact. “We want to have persuasive conversations with members to make sure they understand the issues. We want to build the long-term power of our union,” said Bejerano, speaking about the field plan for the next few months. She also discussed the various ways members can volunteer for member-to-member outreach in November. “We know democracy is under threat right now,” she added, “and that’s why we’ve got to leave it all on the field. It will take each and every one of us to win in November.”

Last week, CWA District 3 activists from central and north Florida came together for a political bootcamp training that was held in person for the first time in three years. Over the two-day training, participants learned about the decades-long strategic campaign corporations have engaged in to undermine workers’ rights, and worked on building critical skills including member-to-member organizing, volunteer recruitment, creating organizing plans, and much more. Attendees also discussed how to strengthen the CWA Political Action Fund (PAF) and discussed CWA's national legislative efforts to fight for pro-worker legislation, as well as CWA’s field mobilization for upcoming elections.

Several CWA-endorsed candidates including Maxwell Frost, who is running for Congress in Florida’s 10th District; Florida Senate Candidate Eunic Ortiz; and Angel Perry, Executive Vice President of CWA Local 3108 and Florida House of Representatives candidate, stopped by the training and spoke to participants. The members left energized and committed to putting in the work to elect pro-worker candidates in the upcoming election. 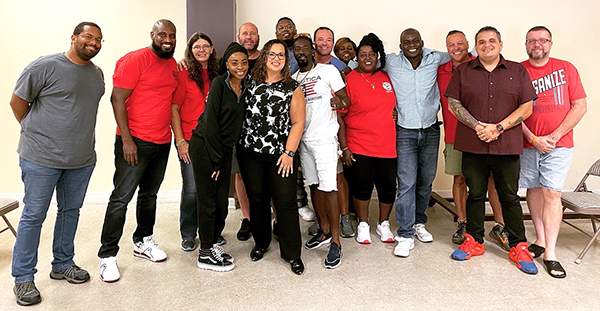 CWA District 3 activists in Florida came together for a political bootcamp training that was held in person for the first time in three years.

CWA Member Killed on the Job in New York

Johnny Pizarro II, a member of CWA Local 1101, was shot and killed early last week while working as a parking production assistant on Law & Order: Organized Crime in Brooklyn, N.Y.

“CWA offers our deepest condolences to Johnny Pizarro’s family and friends. Our members’ safety is our highest priority and the PPAs perform an inherently dangerous job which entails long hours at night, sometimes by themselves, on the New York City streets securing parking. The union has raised these safety issues in negotiations with the production companies. We will continue to pursue provisions in our Agreements that will provide the safest possible working environment for our members,” said Keith Purce, president of CWA Local 1101.

While the investigation is ongoing, a fundraising page has been set up to help support his family, including his six children.

Last weekend, a group of retired BellSouth (AT&T) Operators held their 25th annual reunion at the CWA Local 3805 Union Hall. Around 40 retirees from across the Southeast attended the special occasion and got an opportunity to remember old times, tell tales, and share some laughs.