May 19, 2022 - NABET-CWA Members at ABC-Disney Win a New Contract and other news

States must consult with unions as they develop their funding proposals, and the requirements make it clear that federal dollars will not fund sub-par installations by fly-by-night companies.

“The BEAD (Broadband Equity, Access, and Deployment) requirements effectively address many of our concerns about the failure of past programs to bring reliable, high speed broadband and good, union jobs to rural and underserved communities. Once again, the Biden Administration has made it clear that they are listening and responding to working people and holding corporations accountable for the way they use federal dollars,” said CWA President Chris Shelton.

Over the past year, CWA’s Broadband Brigade members have been sharing their first-hand experience and perspective on how legislators and administrators in their states can use the BEAD funding most effectively.

“Our motto is ‘build broadband better',” said Fernando Roman, Executive Vice President of CWA Local 7026 and member of CWA’s Broadband Brigade from Arizona. “We are eager to collaborate with states in developing plans to meet the NTIA’s requirements and achieve the Biden Administration's goal of internet for all.”

“Whether or not we join a union should be up to the workers at the store,” said Derrick Bowles, who works at the Cumberland store in Atlanta where workers are organizing to join CWA. “By having store managers try to persuade us not to join the union during daily downloads, Apple is putting its thumb on the scale.”

Last week, a leaked memo revealed that Apple has been circulating anti-union talking points for store managers in multiple Apple locations. The company also hired anti-union lawyers from the notorious union-busting firm Littler Mendelson in order to prevent workers from having a union voice.

On Wednesday, newsroom employees at The Hill announced that they are forming a union with the Washington-Baltimore News Guild (TNG-CWA Local 32035). A supermajority of the roughly 80 reporters, designers, copy editors, producers, and social media curators at The Hill have signed cards in favor of joining the union. The workers filed for a union election with the National Labor Relations Board, but asked management and the publication’s new parent company to voluntarily recognize their union. They are fighting for access to affordable health care, opportunities for professional growth, and to create a more diverse and inclusive workplace.

Today is the fifth anniversary of the historic strike at AT&T Mobility when 40,000 CWA members walked off the job for a three-day strike in protest of the company's failure to invest in good jobs. As members mark the anniversary of this strike and the workers’ victory that followed, they continue to mobilize to strengthen their power at the bargaining table and secure the new Orange AT&T Mobility contract they deserve. 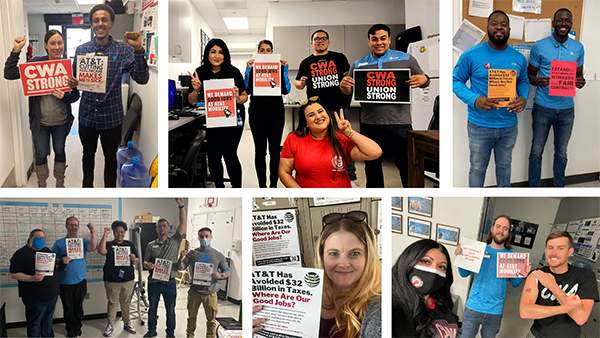 AT&T Mobility workers mark the anniversary of the historic 2017 strike by continuing to mobilize for a fair contract.

DirecTV members covered by the Orange Mobility contract in Eden Prairie, Minn.; Huntington, W.Va.; and Englewood, Colo. continue to mobilize for a fair contract. The workers are fighting back as the company engages in divisive tactics and puts profits before workers in order to appease their partners at the private equity firm TPG Capital.

Under the new contract, the workers will receive across-the-board wage increases of 3.25 percent each year for the next three years. For the first time, daily hire employees assigned to a “travel-only” day will receive hourly pay instead of a flat rate travel stipend. Improvements for full-time staff employees include a significant increase in the accrual rate for current participants in the ABC-NABET pension plan. Additionally, staff employees and daily hire employees who have 401(k) retirement accounts will benefit from a 25 percent increase in the company contribution. 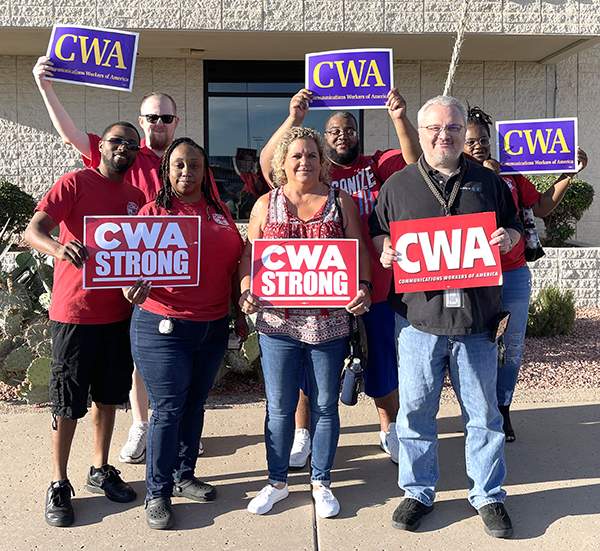 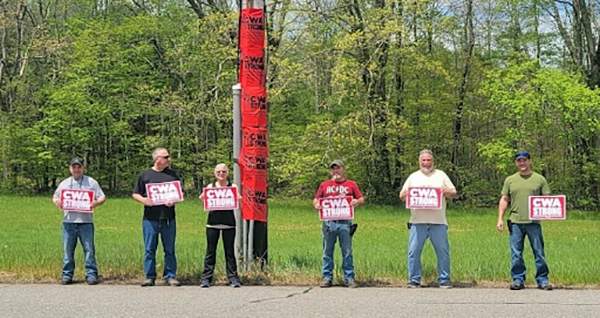 CWA members at OFS Fitel, LLC, a company that manufactures telecommunications and fiber optic products, have been holding informational pickets demanding a fair contract. The current contract, covering workers at two OFS locations in Norcross, Ga. (CWA Local 3263), and Sturbridge, Mass. (CWA Local 1400), is set to expire on May 29. The workers are fighting to ensure the company prioritizes essential workers over profits.

Last Tuesday, workers at the Greenbrier Hotel Corporation in West Virginia, represented by a coalition of eight unions including CWA, ratified a new three-year collective bargaining agreement. The agreement provides an immediate wage increase for all of the 600 bargaining unit employees, a bonus in June 2022, and regular wage increases in 2023 and 2024. The agreement also includes health insurance benefits, retirement benefits, paid sick time, and other enhancements.

Last Wednesday, the San Diego County Board of Supervisors passed two CWA championed ordinances that will require companies like Verizon, who are construction and right-of-way permit holders, to disclose the subcontractors they are using to complete permitted work. CWA played a key role in crafting the right-of-way measure, which will go into effect in June along with the construction portion of the ordinance. Low-road subcontracting has become increasingly prevalent in the telecommunications industry, and most notably, the new ordinances will require Verizon, which is currently building a 5G network in San Diego, to disclose the subcontractors they are using for the rollout.

“The subcontracting of critical telecom infrastructure work to low-road companies can have negative impacts on work quality, workplace safety, and workers’ rights,” said Frank Lopez, a Maintenance Splicing Technician for 23 years and Chair of CWA Local 9509’s Health and Safety Committee. “I, along with other technicians from CWA Local 9509, have surveyed dozens of Verizon’s 5G small cell sites, many of which were plagued with shoddy, substandard work quality and deployed by contractors utilizing unsafe working conditions. We commend Commissioner Fletcher and the entire Board and staff for taking action on this crucial issue.”

“These Ordinances for Subcontractor Transparency will help ensure that San Diegans – workers, elected officials, and the public alike – will be able to identify and hold bad actors accountable for substandard work and poor working conditions,” added Christopher Roberts, President of CWA Local 9509.

New CWA-Backed Bill Will Crack Down on Union Busting

Last Thursday, at a press conference attended by Michael Grant, a Quality Analyst Team Lead for Veteran Evaluation Services (VES), Democratic Senators Bob Casey (Pa.) and Ron Wyden (Ore.) unveiled new legislation that will prevent corporations from using taxpayer dollars to interfere with workers’ rights to organize. Workers at VES, which was recently acquired by federal contractor Maximus, are organizing to form a union with CWA.

As workers around the country join together to form unions in their workplaces, fighting for better pay and safer working conditions, some corporations are spending millions on anti-union campaigns and are able to claim those expenses as business tax write-offs. The No Tax Breaks for Union Busting Act would end this practice and ensure taxpayers are not footing the bill for these campaigns. “Union-busting tactics, like captive audience meetings where we heard false claims about forming a union, should be illegal! And we certainly shouldn’t be giving companies like Maximus that earned over one billion dollars in the last quarter alone a tax break for the costs of intimidating workers,” said Grant, who spoke at the press conference.

Senator Casey, the lead sponsor of the bill added, “Unions are a rising tide that lifts all boats; they don’t just help workers in them, they raise wages for all workers. It’s long past time we level the playing field and protect workers’ rights to organize.” 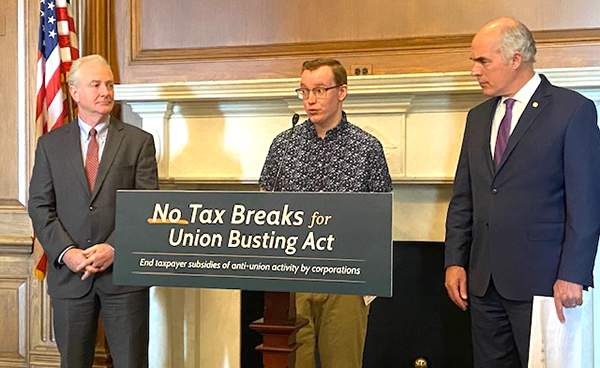 Last Tuesday, Georgia gubernatorial candidate Stacey Abrams met with CWA members and workers from Apple and Delta Airlines who are organizing to join our union. CWA has endorsed Abrams, a long-time organizer and workers' rights advocate who has committed to supporting CWA’s position on broadband expansion and collective bargaining rights for public sector workers.

CWA Statement on the Mass Shooting at Tops Supermarket in Buffalo

Once again Black people in our country have been targeted and traumatized by a violent white supremacist. Ten people were killed, three wounded, and millions terrorized in this racially motivated attack.

While this hate is senseless, it reflects a history of structural and systemic racism which has been given new energy by online communities that promote conspiracy theories, television personalities who legitimize them, and politicians who exploit them.

This suffering must end. Mass shootings - at our workplaces, at our schools, at our churches and other gathering places - have become commonplace in the United States. We mourn the dead, and we recommit ourselves to the fight to dismantle racism. 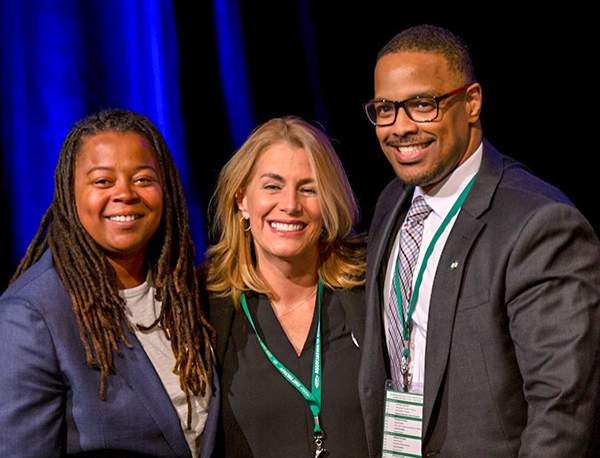 Sara Nelson was re-elected by acclamation for a third term during the AFA-CWA officers’ election held over the weekend in Las Vegas, Nev. In addition, Keturah Johnson, a queer woman of color and combat veteran from Piedmont Airlines was elected as International Vice President, and Dante Harris, a Black United Airlines Flight Attendant, was elected International Secretary-Treasurer. This is one of the most diverse officer teams in AFA-CWA’s history.