May 5, 2022 - Tower Climbers Host Historic Convening and other news

On May 1, International Workers’ Day, founding members of the Tower Climbers Union (TCU)/CWA held a national town hall to share their vision for the future and developments in their efforts to improve conditions and standards in the wireless industry. During this historic, first of its kind event members discussed topics impacting workers including work/life balance, health and safety, industry pricing and wages, working conditions, and more.

“One of the issues in our industry is the culture and the things that are taught to us young. Things like working from sunup to sundown and if you leave early you feel this guilt,” said tower climber and TCU/CWA East Coast Organizer Carl Milloy. “There is always this saying in our industry: ‘either you have all the time and no money, or all the money and no time.’ I think it’s long past due that we stand together and we make the changes needed.”

CWA President Chris Shelton spoke to the workers and encouraged them to continue organizing and to keep fighting for what they want. “We have to get as many people as we can to fight the good fight, to make sure that these companies understand that they have to give you the respect that you deserve in a job that's very, very hard to do,” Shelton said.

The town hall comes less than two weeks after an overwhelming majority of wireless tower climbers at QualTek in Henderson, Nev., filed a petition with the National Labor Relations Board for a union election. TCU/CWA has several hundred founding members in 35 states and the number continues to grow.

Check out this new video from federal call center workers at Maximus, who went on strike on March 23 – the anniversary of the passage of the Affordable Care Act. Even in the face of strong resistance from the company, the workers have been organizing to form a union with CWA, get better pay, and improve working conditions. 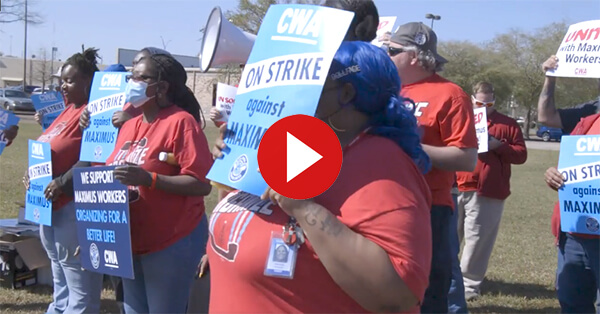 Bergen County Board of Social Services

Last Thursday, Bergen County Board of Social Services employees, members of CWA Local 1089, marched outside their office in Rochelle Park, N.J,. to demand a fair contract. The workers have been working without a contract for 16 months. Nearly 200 workers and their supporters attended the march and called on the county to come back to the bargaining table and address the workers’ demands. These essential workers help residents connect with critical benefits like Medicaid, the Supplemental Nutrition Assistance Program, Temporary Assistance to Needy Families, and more. 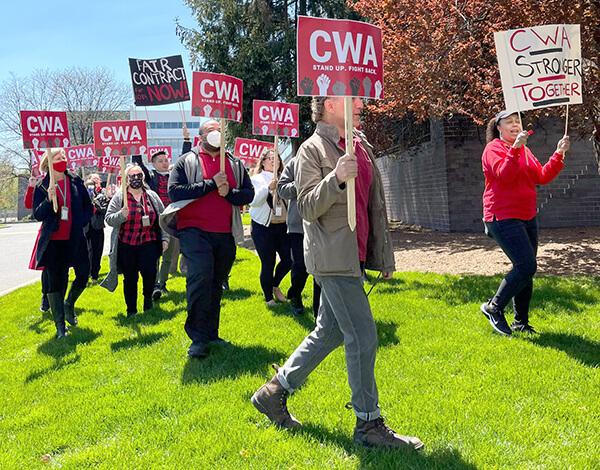 Bergen County Board of Social Services employees, members of CWA Local 1089, rallied outside their office for a fair contract.

CWA members at Frontier Communications in California continue to bargain for a new contract after a previous deal was rejected by the membership. Although some progress has been made, the company remains stagnant on several issues including wages, job security, and issues related to working from home. Last Thursday, the union and the company entered into federal mediation which is scheduled to continue until the end of this week.

CWA members at Frontier Communications in District 4, who have been bargaining since early April, are continuing to mobilize for fair wages, better healthcare, improved working conditions, and more. In recent years, the members have had to deal with a number of issues including the company’s bankruptcy, dangerous working conditions, mandatory overtime due to staffing shortages, and the challenges of the pandemic.

Check out this new video of the members calling on the company to recognize their value and contributions and to treat them with respect by addressing their demands through fair bargaining. 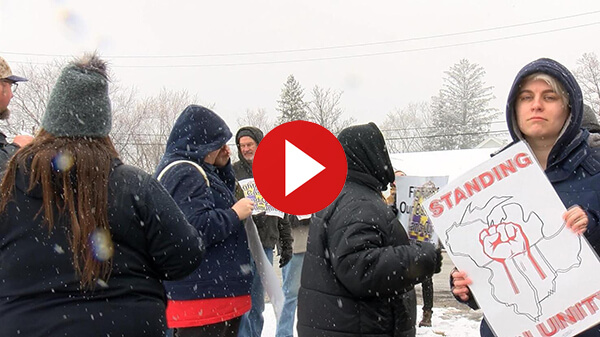 Watch this new video from CWA members at Frontier Communications in District 4 and leave a comment to support their contract fight!

Blood services workers at the American Red Cross (ARC) have been mobilizing for months for a fair contract. The workers have been on the frontlines throughout the pandemic, keeping their communities and donors safe and healthy. They are demanding respect and a fair contract that guarantees affordable health care and safe working conditions including adequate staffing levels. In addition, the workers are seeking to prevent harmful levels of turnover among trained staff so they can collect our lifesaving blood supply. The coalition of unions representing workers at ARC is calling on ARC management to give the workers the contract they deserve. CWA represents hundreds of mobile and fixed site blood collection staff in Pennsylvania, Virginia, and New York, who are responsible for drawing blood from patients and donors, coordinating donor drives, and more.

Last Wednesday, activists from CWA Local 6215 spoke before the Dallas City Council to urge the city to attach labor standards to public funds that are used to expand broadband internet access to unserved communities. The labor standards will ensure that these funds are used in a way that will create more good union jobs and require telecom companies to maintain high training and safety standards.

CWA Broadband Brigade member Robin Johnson and AT&T prem techs Sean Wilborn and Britni Cuington provided an overview of the proposed labor standards and explained why this is an important issue for workers and the community at large. Each time one of the CWA members spoke, every CWA member in the audience stood up in solidarity wearing red CWA shirts.

Since last fall, when the Dallas Broadband and Digital Equity Strategic Plan was first announced, CWA members have been meeting with Dallas City Council members and city officials, mobilizing their members to make phone calls, educating their members about CWA's broadband campaign at worksites, and signing up their members to the Political Action Fund. The members plan to continue mobilizing and partnering with community allies to include our labor standards in the Dallas Broadband Strategic Plan. 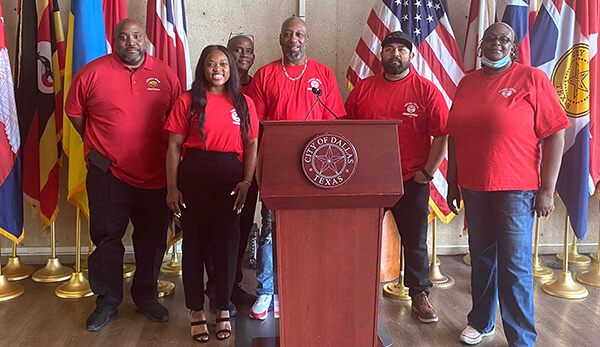 On Tuesday, CWA-endorsed U.S. Senate candidate Tim Ryan and gubernatorial candidate Nan Whaley won their primary elections in Ohio. Ryan, currently a member of the U.S. House of Representatives, is a longtime workers’ rights advocate who has championed the Protecting the Right to Organize (PRO) Act. As mayor of Dayton, Ohio, Whaley has a long history of building solidarity with the labor movement and actively fighting for working people in the state.

On Tuesday, May 3, Susie McAllister was elected Vice President of CWA District 7 by unanimous acclamation during a virtual meeting of the district’s local presidents. McAllister had been appointed by the CWA Executive Board to fill the position after former District 7 Vice President Brenda Roberts retired in March. She has been a CWA member for over 30 years, rising through the ranks and joining the District 7 staff in 2009. Most recently, she served as former Vice President Roberts’ assistant in District 7.

“Driven by Wall Street, General Electric is about to spend $2.5 billion to break up the company and $3 billion on new stock buybacks,” said CWA President Chris Shelton. “That’s $5.5 billion that is going to bankers and lawyers and middlemen instead of updating and expanding manufacturing facilities, paying good union wages, and making sure we are not dependent on other countries for the critical components of our green energy supply chain. IUE-CWA members are ready and eager to be part of the revitalization of American manufacturing. It’s time for GE to step up.”

We’re calling on GE to put the industrial future of America first, with a bold $5 billion investment in its U.S. manufacturing and an end to its offshoring and outsourcing, letting workers have a seat on the Board of Directors, and letting shareholders vote on the planned break-up,” said IUE-CWA President Carl Kennebrew. “GE workers are preparing for 2023 contract negotiations, and company executives should answer our call for a fair contract that protects good-paying union jobs and invests in our communities.”

The event sent a clear message that GE must focus on the fundamentals like the U.S. manufacturing operations vital to its long-term success, commit to building a sustainable domestic supply chain, and halting job cuts to American manufacturing plants. Click here for the full event video.

Flight Attendants at Delta Airlines, organizing with AFA-CWA, are fighting to hold the airline to its promise to provide new, safe uniforms. In 2018, Delta rolled out a new uniform line. Within weeks, Flight Attendants began reporting severe, adverse reactions like trouble breathing, extreme headaches, painful rashes, and hair loss. An independent lab test showed the uniforms had high levels of a toxic chemical.

After Flight Attendants spoke out, Delta promised "a completely new uniform program" and allowed workers to wear an alternative black and white uniform (a common fix across the industry in situations like this). But now management is backtracking on their promise and the workers are being forced to wear a uniform they don't feel safe in, or stay home without a paycheck. Click here to send a letter to CEO Ed Bastian and Delta management demanding that they live up to their promise to provide a new uniform that is safe and healthy for all workers, and in the interim, allow workers to continue wearing alternative uniforms without penalty.