Feb 24, 2022 - CWAers Honored for Black History Month and other news

Baldwin’s letter follows the National Labor Relations Board’s hearing on the workers’ petition for a union election. Although a supermajority of Raven QA workers signed cards in support of having a union, a hearing was necessary because Activision Blizzard refused to voluntarily recognize the union and is using every procedural route possible to delay the vote in an attempt to subvert the workers’ effort to have a voice on the job.

“I am disturbed by recent media reports that describe efforts by Raven management to disrupt the organization effort,” Sen. Baldwin’s letter reads. “I urge you and the management at Raven Software to negotiate in good faith with the workers and suspend any efforts to undermine your employees’ legal right to form a union and collectively bargain.”

Last week, workers at Alliance for Justice, members of the Washington-Baltimore News Guild (TNG-CWA Local 32035), voted unanimously to ratify the first union contract in the organization’s 43-year history. In the new three-year contract, workers made significant progress on their top priorities including salaries, health insurance, and protections against discrimination. They also won improvements in leave, work hours, remote work, and other benefits. Read more here. 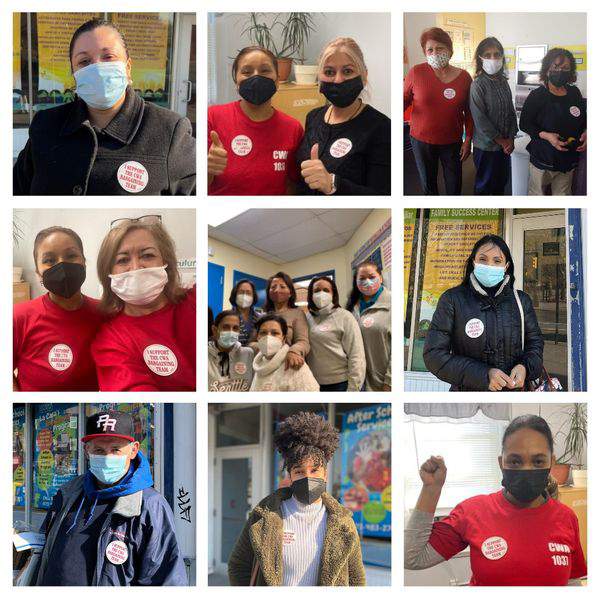 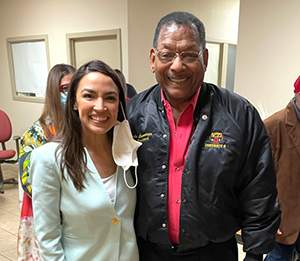 CWAers in Texas continue their mobilization efforts to turn out voters and build support for pro-worker candidates in upcoming primary elections.

CWA District 6 Vice President Claude Cummings, Jr., opened the event with an overview of CWA's political program in Texas, highlighting our work to elect candidates who support workers’ rights by building a coalition of labor and community partners. Casar and Cisneros both spoke about their vision to build a better Texas for working people. Rep. Ocasio-Cortez spoke about her organizing roots in Texas and her commitment to growing the labor and community movement to elect more pro-labor candidates to Congress. The next day, CWA activists along with other labor and community allies joined Rep. Ocasio-Cortez and a large crowd of voters for a rally in Austin to show support for Casar and help boost voter enthusiasm ahead of early voting.

Last week, public workers in New Mexico won full funding for a $15 minimum wage. This is a major victory for members of CWA Local 7076 who have been engaging in political and legislative mobilization and bargaining to secure this funding. CWA represents over 1,500 public sector workers in New Mexico who will directly benefit from this raise. The raises, which will be included in the workers’ collective bargaining agreements, will begin in April.

Unfortunately, in roughly half the country, public workers, who serve states and municipalities providing vital services, do not have the right to collectively bargain for fair wages, better working conditions, and other workplace protections. CWAers are turning up the pressure on state lawmakers to secure public workers’ bargaining rights. Members of CWA Local 7799 made a series of videos sharing their stories on the importance of securing collective bargaining rights for Colorado public workers. Check out their testimonials here.

CWAers Continue to Build Support for the PRO Act

CWA Local 6143 in San Antonio, Texas, in coalition with Our Revolution and the Texas AFL-CIO, hosted the Support Texas Workers: Rally for PRO Act to hold Rep. Henry Cuellar (D-Texas) publicly accountable for his opposition to the PRO Act.

The event was moderated by CWA Local 6143 President Geronimo Guerra with opening remarks by CWA Local 6143 Legislative-Political activist Katie Garcia. Both Guerra and Garcia highlighted Rep. Cuellar's track record of being the only Democratic member of Congress to vote against the PRO Act twice. Members from CWA Local 6132 and the Texas State Employees Union (CWA Local 6186) also participated in the rally. The strong turnout sent a loud message that CWA, the labor movement, and community allies are committed to taking action and holding politicians who vote against the interest of working people accountable.

If you are not yet receiving text alerts from CWA, you can text the words CWA ACTION to 49484 to add yourself to the list.

"Cheers to establishing International Black Aviation Professional Day and recognizing the contributions of Black Americans to aviation," said Sara Nelson, AFA-CWA International President. "Decades after trailblazers like Ruth Carol Taylor and Willa Brown made history in aviation, Black workers still face barriers to entry and discrimination on the job. Today is about breaking barriers and lifting the strength of an inclusive workplace. As we celebrate the past and present of Black aviation, we also recommit ourselves to the work of addressing bias and obliterating discrimination so our industry and our unions can live up to our nation’s highest ideals.”

CWA District 6 Vice President Claude Cummings, Jr., was elected to join the NAACP’s National Board of Directors as an at-large member. The election took place during the NAACP’s Founders Day event, celebrating the organization’s 113th anniversary. Cummings has a long history as a leader in the NAACP and in the larger movement for racial equity. So far, he has served as the First Vice President of the NAACP Houston Chapter, Second Vice President Texas State NAACP Conference, and as a member of the Labor Committee for the National NAACP. He hopes to use his new position to continue to strengthen the bridge between the struggle for labor rights and civil rights.