Under the terms of an agreement reached with AT&T, CWA members who are employed by DirecTV will continue to be covered by existing collective bargaining contracts. CWA entered into effects bargaining with AT&T as a result of the announced spin-off of its U.S. video services into a stand-alone company. The spin-off was completed on August 2 with the new independent DirecTV now co-owned by AT&T and TPG Capital, a private equity firm.

The agreement also ensures vesting of pension and 401(k) balances for unvested employees and provides priority rehiring consideration for former AT&T employees who transitioned to DirecTV. Details of the agreement are available at cwa-union.org/news/cwa-directv-effects-bargaining-final-report.

“This agreement is a big first step in ensuring that members are protected during this transition,” said CWA President Chris Shelton. “I am grateful for the bargaining committee and the workers who supported them for staying strong during negotiations and achieving this victory.”

The Bargaining Committee has now entered into negotiations with the new DirecTV and will continue fighting to make sure our members' rights are protected at their new employer.

Workers at Fortune Magazine, members of the NewsGuild of New York (TNG-CWA Local 31003), threatened to picket the magazine’s prestigious CEO Initiative conference, which forced executives to postpone the event. The conference, set for mid-September in Washington, D.C., would have been the magazine’s first in-person event in several years.

The planned action was in response to the lack of progress in contract negotiations. Instead of engaging in good faith bargaining, the company has refused to move on severance pay, protections from outsourcing, diversity, and source protection. The company also insists on continuing to evaluate workers based on traffic and quotas.

Prior to the postponement, the magazine had scrubbed several prominent speakers, apparently out of fear that the speakers would refuse to cross a picket line.

Members of the Fortune Union are determined to continue to strengthen their bargaining position and fight for a fair contract.

This action was organized ahead of the current contract’s expiration on September 30 to raise concerns about low staffing at all three of the Catholic Health hospitals, stagnant wages, and unsafe working conditions. Members of other unions, elected officials, and mayoral candidates also joined the picket in solidarity with our healthcare heroes. 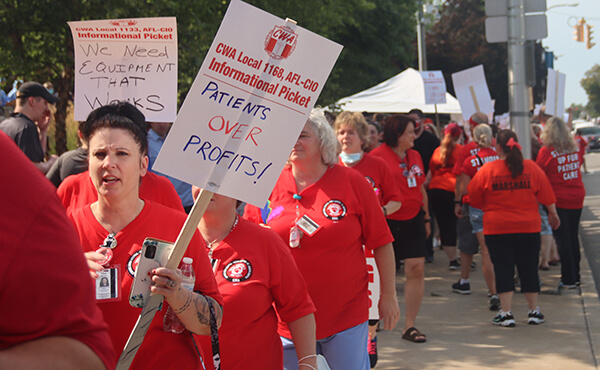 “New York lawmakers and General Electric have an unprecedented opportunity right now to bet big on New York workers, and step up to be the definitive leaders on green domestic manufacturing,” said IUE-CWA President Carl Kennebrew. “By harnessing the power of wind, we can put laid-off manufacturing workers in our own communities back to work and build a green future that ends the dangerous impacts of outsourcing our essential infrastructure. New York is at a crossroads – and Schenectady workers are ready to get to work.”

At one time, General Electric employed over 30,000 workers in Schenectady. That number is now less than 1,000, with many of the jobs being shipped overseas, most recently to Poland.

This event was organized in response to growing concerns about racial injustice at the health system. Systemic discrimination against African American employees in disciplinary and termination decisions, forcing a captive audience meeting on Black and Latinx custodial workers discouraging them from forming a union, and retaliation against employees who raised concerns about pandemic safety and systemic racism, are just a few of the examples of racial injustice the workers and community leaders are fighting against.

The public prayer called on the Denver Health and Hospital Authority’s Board of Directors to enact three pillars of change: honestly reckoning with racial injustice, accepting community accountability, and respecting workers rights. 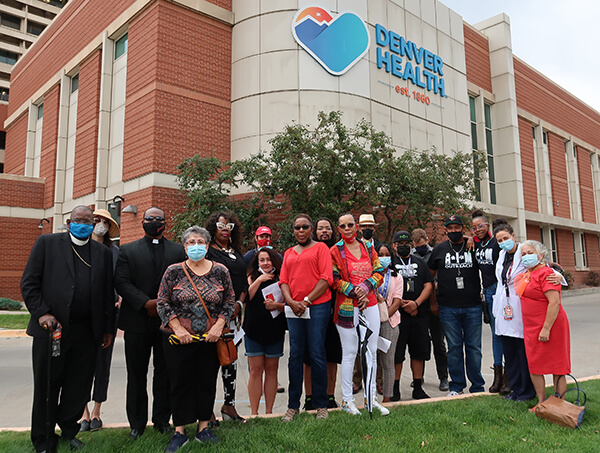 Last Wednesday, CWA local leaders and activists in California hosted a virtual town hall with Governor Gavin Newsom and participated in a phone bank to encourage Californians to vote NO in the recall election. CWAers across the state have been mobilizing to ensure a victory for working people in this critical election.

“The Republican and the right wing folks, they have an echo chamber and they’re ginned up on this,” said Governor Newsom. “Their enthusiasm is off the charts to take the keys to the fifth largest economy, the bluest state in America where our values are quite literally at risk if we don’t push back and vote NO on this recall.”

To join the phone bank on Mondays and Wednesdays at 5pm PT, sign up here.

Governor Gavin Newsom speaking to CWAers in California during a virtual town hall. 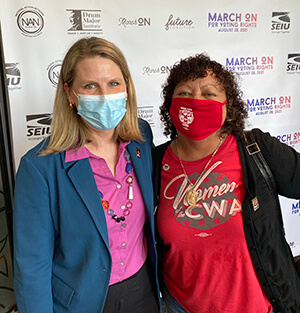 CWAers joined thousands of activists in cities across the country to demand federal voting rights protections on Saturday, the 58th anniversary of Martin Luther King Jr.’s historic March on Washington. The rallies were part of an ongoing nationwide effort to fight against a wave of discriminatory and restrictive state laws threatening access to voting.

Senators must make protecting voting rights the top priority when they return from recess next week. We will continue to mobilize to put pressure on the Senate to enact critical pieces of legislation to ensure voting rights protections. 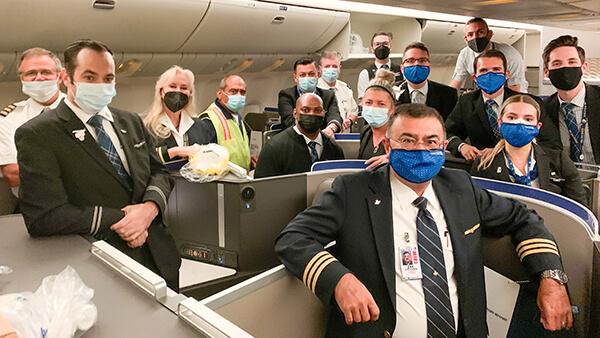 AFA-CWA Flight Attendants have been assisting in transporting members of the U.S military, American citizens, and other Afghan evacuees from military bases and other staging areas in the Middle East and Europe to the U.S., as part of the Department of Defense’s Civil Reserve Air Fleet program. Read more here.

Upcoming Events in Honor of the Heroes of 9/11

This September 11 marks the 20th anniversary of the 9/11 attacks. CWA members will be participating in a variety of events to remember those who lost their lives on that day and to honor the workers who participated in the response, recovery, and rebuilding.

AFA-CWA has posted a list of remembrance events taking place across the country at neverforget.afa-cwa.net/september-11-events.

On Saturday, September 11, at 1 pm EST, CWA Local 1101 is hosting a virtual showing of their new video "We Have Not Forgotten," which highlights the role CWA Local 1101 members played in rebuilding the communications network in lower Manhattan after the horrific attacks on 9/11.

This two-day program will feature journalists from NewsGuild-CWA as well as health professionals, legal experts, and elected officials to discuss 9/11 health impacts and the 20 year fight for 9/11-related healthcare and compensation.

To see the full schedule of panelists and to get information about how to view this event, click here.