Last week, CWA legislative and political activists in Florida met with Congressman Charlie Crist in his Tampa area district office to thank him for his support for the Protect the Right to Organize (PRO) Act. They also discussed Congressman Crist’s run for governor, the importance of ensuring that broadband expansion plans protect workers’ rights, the need for call center legislation to keep good jobs in Florida, and a commitment to veto union busting legislation that targets public sector workers. CWA legislative and political activists in Florida will continue to communicate with all candidates in the upcoming election to make sure working people’s issues are heard. 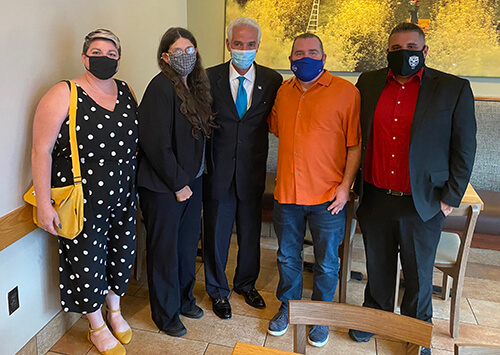 CWA legislative and political activists in Florida met with Congressman Charlie Crist (center) to thank him for his support and discuss critical workers’ rights issues. 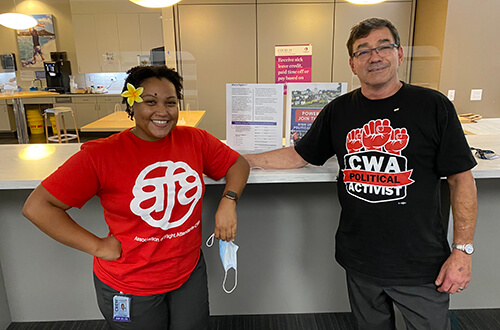 E-Z Pass Workers Fight to Save Their Jobs

E-Z Pass workers from CWA Local 1102 have been fighting to save their jobs. The Metropolitan Transit Authority, the government agency responsible for managing New York State’s bridges and tolls, recently awarded the E-Z Pass contract to a new company named Fanueil. This ended the current arrangement, which has been in place for over a decade, putting CWA Local 1102 members’ jobs in jeopardy.

Members of the local have been mobilizing to secure a commitment from the new company to keep their jobs. They have been meeting with elected officials including State Senator Diane Savino (D-N.Y.) and Assemblyman Charles Fall (D-N.Y.), who have been supportive of the workers.

Click here to listen to CWA Local 1102 President Steve Lawton and E-Z Pass worker Hope Gilmore on the America's WorkForce Union Podcast​, discussing the campaign to save E-Z Pass jobs, as well as the campaign ​​for worker safety during the height of the pandemic. 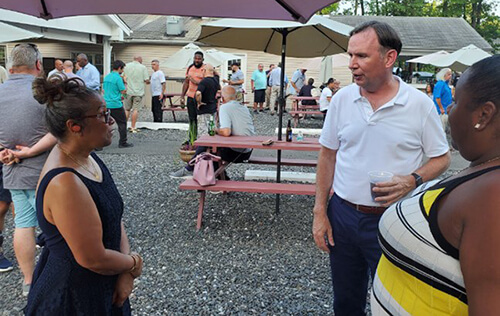 March On for Voting Rights: Join a March Near You! 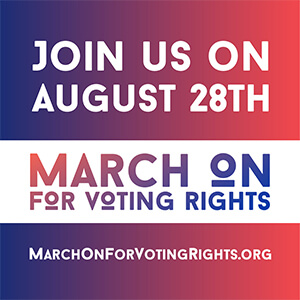 On August 28, the 58th anniversary of Martin Luther King Jr.’s historic March on Washington, CWAers and other activists will march on cities across America to demand federal voting rights protection. Click here to RSVP for a march near you or a virtual event.

This is urgent. More than 400 voter suppression bills have been introduced in 49 states since January in an attempt to weaken and divide working people. Thanks to months of mobilization by CWAers and allies across the country, the House of Representatives has passed the John Lewis Voting Rights Act and the For the People Act, bills that ensure the protection of voting rights at the federal level, overriding discriminatory and restrictive state laws.

Now we must put pressure on our Senators to step up and enact these critical pieces of legislation into law.

Join a march near you to take action.

This month, journalists at the Asbury Park Press, Home News Tribune, and Courier News, and digital producers at the Atlantic Digital Optimization Team voted to join The NewsGuild of New York (TNG-CWA Local 31003). Journalists at Washingtonian magazine also voted in favor of forming the Washingtonian Guild. They will be members of the Washington-Baltimore News Guild (TNG-CWA Local 32035).

This week, in a letter to President Biden, the NewsGuild-CWA, NABET-CWA, and three other media unions urged the Administration to support the safe evacuation of all journalists, interpreters, translators, camera crews, support staff, and their families fleeing Afghanistan.

The letter cites the dangers faced by journalists who are directly targeted by forces interested in controlling dissent and the flow of information and calls on the United States government to stand for free press by facilitating the safe transit of all media professionals to protected areas.

CWA District 9 Members Pledge to Rebuild for Our Future

Last week, CWAers from across District 9 gathered for the first ever virtual District 9 Meeting and Leadership Conference. CWA President Chris Shelton spoke at the conference, themed Rebuilding for Our Future, and stressed the importance of continuing to build on our political and organizing accomplishments, including fighting back against Governor Newsom’s recall election in California. “Those behind the recall have a long history of attacking unions. They are attempting to roll back decades of progress on workers’ rights in the state. The recall poses a direct threat to our jobs, wages, benefits, and our union,” Shelton said. “We need to fight back and vote NO on this recall election.”

“It's time for the Union to expand and organize across all industries, including those outside of units traditionally represented by CWA,” said CWA District 9 Vice President Frank Arce during his opening remarks. “Several District 9 locals have current organizing campaigns in nontraditional telecommunications industries, non-profits, gaming, dot-com, and service workers at casinos.”

Bill Boarman, retired president of the Printing, Publishing and Media Workers Sector (PPMWS-CWA), passed away on Sunday in Severna Park, Md. He was 75 years old.

Boarman also served as the 26th Public Printer of the U.S. Government Publishing Office, from December 2010 to January 2012, after being appointed by President Barack Obama. 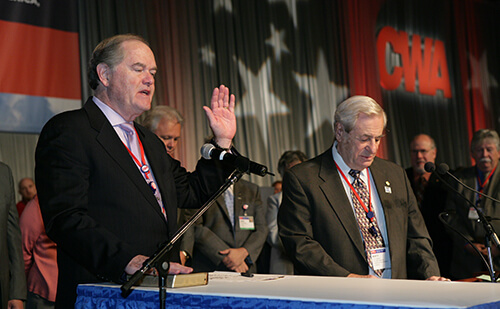 Bill Boarman, pictured here taking the oath of office as a member of CWA’s Executive Board, passed away on August 22.

Today’s historic appointment of Liz Shuler as the next president of the federation, the first woman to hold the office, and United Steelworkers International Vice President Fred Redmond as secretary-treasurer, the first African American to hold this position, by the AFL-CIO’s Executive Council is welcome news to all CWA members and the entire labor movement. Tefere Gebre will continue as executive vice president, rounding out the most diverse team of officers ever to lead the AFL-CIO.

“For more than a decade Liz Shuler and former President Trumka worked hand in hand to guide the AFL-CIO,” said CWA President Chris Shelton. “The diversity of the new leadership team is a sign of progress for our movement. I have absolute faith in their ability to continue to fight for the dignity of all workers.”

“Liz Shuler has dedicated her career to fighting for the protection of the rights of working families,” said CWA Secretary-Treasurer Sara Steffens. “As a trailblazer for women and young workers, her appointment will be an inspiration to a new generation of leaders in the labor movement and beyond.”