This week, a judge in Missouri agreed with a coalition of unions representing state workers that a bill which passed in 2018 stripping public service workers of collectively bargained protections on the job violated the Missouri Constitution. The lawsuit against Missouri Senate Bill (SB) 1007 was filed with the Cole County Circuit Court by CWA Local 6355, AFSCME Council 61, and SEIU Local 1 in October 2018.

According to CWA Local 6355 President Natashia Pickens, the court's decision this week was a total win for the unions. "We are relieved the court made the right decision for Missouri's public service workers this week. SB 1007 was an attack on our fundamental rights as workers to organize and bargain collectively. This joint effort by multiple unions shows that when we fight, we win," said Pickens.

The judge found that the state bargained in bad faith when it stopped processing grievances and refused to bargain over cause for discipline, seniority for layoffs, and grievance-arbitration in collective agreements with the unions. The judge has ordered the state to bargain in good faith without regard to SB 1007 and without unilaterally modifying existing terms, to comply with the CWA and AFSCME collective agreements, and to process grievances under those agreements.

"The collective agreement covering members of CWA Local 6355 will remain in force until a new agreement is reached, and the state must process any grievances filed during the term of the agreement," said Pickens. "We look forward to negotiating a fair agreement with the state that recognizes the essential work that our members do every day. It's about time."

AT&T announced a plan this week to spin off its WarnerMedia division and combine it into a new company with Discovery. CWA is concerned about the impact of this plan on media workers' jobs and wages and is calling for greater scrutiny from regulators.

Three years ago, CWA supported AT&T's acquisition of Time Warner after assurances that workers at the new company would be able to join a union without interference from management and engage in collective bargaining.

AT&T did not keep its promise to the workers. Instead of honoring CWA's long standing voluntary union recognition agreement, the company launched a court battle to dodge its contractual commitments to respect workers' organizing rights.

Now, AT&T is touting the $3 billion in "synergies" that the merger will create between Warner Media and Discovery. Synergies are almost always another way of saying job cuts, and in the absence of union representation and collective bargaining agreements, consolidation is likely to result in lower wages across the industry as workers have fewer options for employment.

For the People Act Advances in the U.S. Senate

CWA activists' efforts to inform voters about the For the People Act and get them to contact their Senators have been paying off. The bill cleared the Senate Rules Committee last week.

The For the People Act would loosen the hold corporate money has on our country so that we can build worker power. The bipartisan bill has already passed the House of Representatives.

The next stop is the Senate floor where we'll need to get rid of the filibuster for it to be considered. Don’t let up! Your messages and calls are making a difference. Contact your Senators at cwa.org/forthepeople.

Last week, Stan Kiino, a member of AFA-CWA Local 29011 who serves on the board of the Asian Pacific American Labor Alliance (APALA), wrote a powerful letter to fellow union members on the occasion of Asian American Heritage Month.

In calling attention to the increase in anti-Asian violence and hate, Kiino said, "The incidents range from racist name-calling to violence resulting in serious injury and in some cases fatality ... Clearly there is no room in either our unions or our workplaces for this hatred. Neither our unions nor our employers should tolerate hate and discrimination."

Kiino spoke of the importance of celebrating diversity in our workplaces and taking an interest in each other and our backgrounds. The resulting conversations among members "often result in understanding, empathy, and respect" and can "change hearts and minds," he wrote.

APALA has created a useful toolkit for union activists on how we can build a "movement that is truly inclusive of all workers and that fights to end anti-Asian racism with the same fervor as we fight for workers' rights." You can access the toolkit at https://www.apalanet.org/labor-toolkit-on-anti-asian-racism.html. 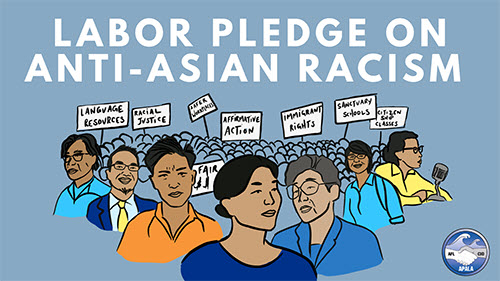 CWA activists from across the Southeast teamed up this week to call voters to share information about the PRO Act and ask them to contact Senators Marco Rubio (R-Fla.) and Richard Burr (R-N.C.) about the bill. The PRO Act will make it easier for workers to join unions, shift power away from CEOs to workers, and give us more leverage in contract negotiations. Make sure your Senators know you want them to support the bill by calling them at 877-750-7411.

CWA, along with other allies, is calling for the Occupational Safety and Health Administration (OSHA) to withdraw proposed changes to the OSHA Hazard Communication Standard. The changes, which were initiated by the Trump administration, would put workers at risk by allowing manufacturers, importers, and distributors to withhold essential chemical hazard information from workers, employers, and emergency responders.

"The next step should be a much more transparent set of conversations with workers, their unions, workers centers, occupational health specialists, and employers, about how best to improve the standard in order to meet its stated goal of informing workers about chemical hazards on the job," the groups wrote in comments they filled with OSHA about the standard.

Check out the fact sheet on the proposed changes here.