CWAers Hit The Streets to Pass the PRO Act 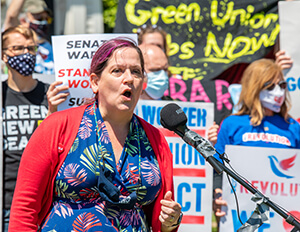 At a rally in front of Mark Warner's house in Alexandria, Va., CWA Secretary-Treasurer Sara Steffens called on Warner to support the PRO Act. Steffens was also featured on a Zoom rally with allies to pass the PRO Act, and an Instagram Live conversation with musician Billy Bragg.

On May Day, CWA members and activists from more than 40 allied organizations held rallies across the country and participated in phone and text banks to draw public attention to the fight to pass the Protecting the Right to Organize (PRO) Act. The PRO Act would make it easier for workers to join a union, ban and penalize employers for using heavy-handed union busting tactics, and stop employers from using stall tactics to delay contract negotiations. CWAers also visited legislative offices to thank their members of Congress and Senators for voting for or cosponsoring the PRO Act. Check out the great photos here!

On Tuesday, in a rare move for S&P 500 companies, GE shareholders rejected a $47 million bonus package for CEO Larry Culp. The action came after IUE-CWA members drew attention to the bonus last week at an online webinar co-hosted with Change to Win Investment Group and staged protests urging the "no" vote. On the morning of the shareholders vote, union activists held signs outside GE headquarters in Boston that read, "No reward for outsourcing U.S. jobs."

While Culp was recently recognized by the New York Times as the sixth highest paid U.S. CEO, workers at GE facilities across the country have faced layoffs and offshoring. Union members and community activists in Lynn, Mass., have been waging a campaign to fight GE's recent announcements to farm out more of their military jet engine work to Romania, as well as other off-shoring announcements at IUE-CWA union facilities.

"No one is more committed to the success of General Electric than GE workers. We will be as productive and efficient as possible, but we need a commitment from GE to invest in the U.S. industrial base," said IUE-CWA Local 81201 President Adam Kaszynski. 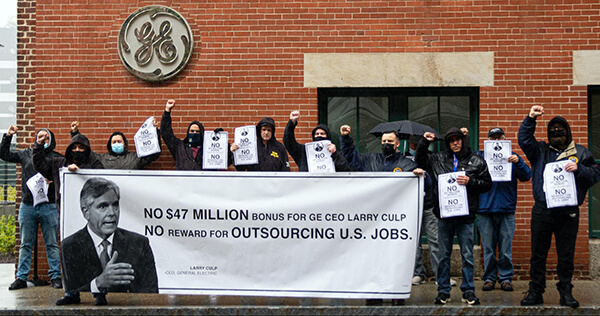 On the day of the shareholders' vote, union activists held signs outside GE headquarters in Boston that read, "No reward for outsourcing U.S. jobs."

Last week, Sylvia Walker, a leader in organizing her co-workers at Maximus to join CWA, joined Labor Secretary Marty Walsh for a discussion of President Biden's new executive order to raise the minimum wage for federal contract workers to $15 an hour.

Walker, who handles calls for the taxpayer-funded 1-800-MEDICARE line, thanked Secretary Walsh and President Biden for delivering on their promises. She shared how difficult it has been for her and her co-workers to live on poverty wages. She told Secretary Walsh that some of her coworkers make as little as $10.80 an hour and described how she's had to visit food banks just to get by during the pandemic. Walker said that many of her coworkers struggle to afford even basic healthcare services even though their job is to help Americans get access to affordable healthcare every day.

President Biden's executive order will transform the lives of hundreds of thousands of federal contract workers who have been earning poverty wages for far too long.

Check out the video from the event here.

With the end of the legislative session last week, Florida CWAers succeeded in fighting off some of the most vicious attacks we've ever seen on working people. A pair union busting bills, SB 78 and SB 1014, threatened hundreds of thousands of public sector workers' union representation, including more than 3,000 CWAers.

This vile anti-worker legislation had the support of big money anti-union think tanks. To fight back, CWA members sent hundreds of letters, placed newspaper ads and put up billboards opposing the legislation, placed an op-ed in the Palm Beach Post, made hundreds of calls to their legislators, and held rallies on the ground to make it clear that CWA members won't tolerate these kinds of attacks on workers, now or ever.

CWA member Robert Arnold spoke at a press conference in Tallahassee (left), and union members held rallies on the ground to make it clear that we won't tolerate these kinds of attacks on workers, now or ever.

Why Didn't AT&T Do Anything to Prevent These Workers' Deaths?

A new report issued by the AFL-CIO, its 30th annual Death on the Job Report, reveals that every day, on average, 275 U.S. workers die from hazardous working conditions. And this was even before the devastating COVID-19 pandemic that has been responsible for far too many worker infections and deaths in our country.

CWA Local 3808 member Eric Chapman, an AT&T worker in Nashville, spoke at an AFL-CIO press event about two CWA members from his local who recently died – deaths that the union believes could have been prevented.

"Just two weeks ago, one of our members, Dan, died from a fall from a ladder while doing a fiber optic install. Dan was 48 years old and worked as a wire tech for about six years. We believe that Dan's death was preventable and that the company was not following its own policy," Chapman said.

Chapman also spoke about Bianca Bowie, his coworker who died of COVID-19. "Bianca Bowie was a ray of sunshine and a diehard Packers fan. She was always so positive and always brought up everyone's spirits," Chapman said. "It took Bianca's death to get the company to make changes to protect us, and even then, it was only because of the demands made by the membership and our union leadership at all levels. Because we fought back – together – we were all eventually able to work from home," Chapman said. 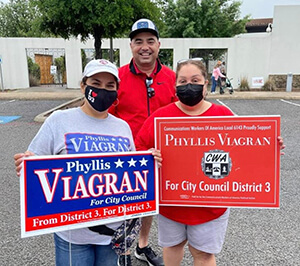 Political activists from CWA Local 6201 canvassed and phonebanked for CWA-endorsed Fort Worth Mayoral Candidate Deborah Peoples, who is now in a runoff election to become the first African American mayor of the city.

CWA District 4, along with nine other unions representing workers across Ohio, has endorsed Congressman Tim Ryan for U.S. Senate. Ryan is a strong supporter of the PRO Act, a critical bill to make it easier for workers to join unions and negotiate strong contracts.

"Ohio's working families need Tim Ryan in the U.S. Senate," said CWA District 4 Vice President Linda L. Hinton. "Tim has stood with us when it mattered most – pushing to keep good-paying jobs in our communities, working to protect the promise of a dignified retirement, and fighting to pass legislation like the PRO Act that will help workers win the wages, benefits, and working conditions they deserve. Tim knows how Ohio workers have taken risks and made sacrifices over the last year, and he'll put workers first every step of the way as we rebuild and recover from this pandemic."

CWA Local 13101 members who work for Delaware's Department of Health and Special Services in the Division of Services for Aging and Adults with Physical Disabilities have reached a tentative agreement on a three-year contract providing guaranteed wage increases.

This victory is a direct result of intense political action by CWA Local 13101 and the Delaware State AFL-CIO in successfully urging the Delaware State Legislature to pass landmark legislation, SB 8, which strengthened collective bargaining rights for public sector workers.

Prior to the passage of SB 8, these Senior Social Workers/Case Managers were considered Merit Employees, meaning that they were barred from negotiating for wages. The last wage adjustment by the Legislature was a paltry $500 lump sum in 2019 and zero base wage increase.

More than a year after a small unit of Frontier Communications workers on the Navajo Nation in Arizona and New Mexico voted to join CWA in the face of an aggressive, expensive union busting campaign from the company, they are still stuck at the bargaining table with Frontier trying to come to an agreement on a first contract.

In its recent proposals, Frontier Communications has offered the 33 workers, all Navajo or Hopi, almost $2 per hour less than what workers in surrounding states have received in recent contracts, and is refusing to guarantee a full 40-hour work week.

In a joint letter sent this week from the Arizona Corporation Commission's Sandra Kennedy and Ann Tovar, the two commissioners expressed concerns that other nearby Frontier employees have guarantees of full-time employment in their contracts and that workers on the Navajo Nation were "being treated differently than their counterparts across Arizona." Twelve Arizona state representatives also sent a letter of support for these workers.

"There are no other service providers competing to build out and expand access on the Navajo Nation,” said Ron Fagan, President of CWA Local 7019 in Show Low. “Frontier should be investing in the region, not trying to nickel and dime these workers or send them home without pay if they think there's no work. There's always work to be done. Our union stands with them and they deserve the same wages that other technicians across Arizona and New Mexico make."