CWA recently launched initiatives in state legislatures across the country aimed at greater public oversight of broadband providers. The goal is to ensure public safety and network resilience while protecting consumers and closing the digital divide. CWA's efforts complement the Biden administration's American Jobs Plan, which includes $100 billion for expanding broadband coverage and creating good jobs in the industry.

"President Biden has made a powerful case for recognizing that broadband is a critical part of America's 21st-century infrastructure and for considering its effect on the lives of working people," said CWA President Chris Shelton at an event marking the new initiative. "Working people need robust telecommunications services that support good jobs and full access to health care resources, public services, and educational opportunities. Instead, we have been left with deteriorating telephone networks and a failure to deliver next generation services to rural and low income areas."

CWA District 7 Vice President Brenda Roberts added, "Telecom industry executives said deregulation was necessary for competition and that competition would magically fix everything. It hasn't, and the public needs watch dogs we can work with to ensure this essential service is there for our communities today and into the future. Without regulation, the goal of universal broadband service is just a nice dream."

The COVID-19 pandemic has revealed how critical broadband is to the nation's health and education systems, and how underserved many rural and urban communities are. CWA Local 7777 Executive Board Member Sandra Parker Murray, who has been working with the Coloradans for Better Internet Coalition, explained, "As school buildings closed during the pandemic, students who didn't have reliable broadband were cut off from their education entirely ... Hot spots have helped some families get by, but they are not a sustainable solution."

Natural disasters have also alerted the public to the need for more oversight. CWA Local 9408 member Stan Santos, who serves as legislative chair of CWA's Coastal Valley Council, said, "California's wildfires have shown how the companies have cut corners leaving communications networks vulnerable when they are most needed—when disaster strikes."

Check out more information about the initiative and CWA's model legislation, known as the Broadband Resiliency, Public Safety and Quality Act here.

President Joe Biden has five words for Republicans who say that his American Jobs Plan should be scaled back to focus on "traditional" infrastructure like roads and bridges: "High speed internet is infrastructure."

In remarks about his plan, President Biden said, "We need to start seeing infrastructure through its effect on the lives of working people in America. What is the foundation today that they need to carve out their place in the middle class? ... That's what infrastructure means in the 21st Century. It still depends on roads and bridges, ports and airports, rail and mass transit. But it also depends on having reliable high-speed internet in every home. Because today's high speed internet is infrastructure." 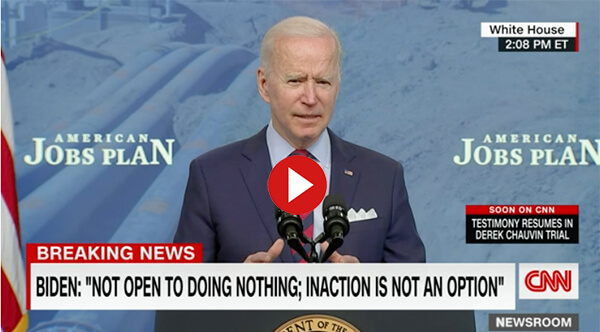 On April 11, CWA Secretary-Treasurer Sara Steffens joined NewsGuild-CWA activists and more than 35 members of CWA Next Generation to talk about reforming U.S. labor law by passing the Protecting the Right to Organize Act (PRO Act) and the Public Service Freedom to Negotiate Act (PSFNA).

Secretary-Treasurer Steffens shared the pride and power she felt organizing with co-workers as a young reporter at the Contra Costa Times in California and joining the NewsGuild-CWA. Only two weeks after the union vote she was fired for her leadership in the campaign, which only intensified her commitment to the labor movement.

Leah Waters, a multiplatform editor for The Dallas Morning News and Dallas NewsGuild unit chair, described relentless one-on-one and captive audience meetings in which management claimed the newspaper would go out of business if the workers voted in favor of the union. Ultimately, those tactics backfired and strengthened support for the union, leading to an overwhelming 75% vote in favor.

Annie Shields, engagement editor at The Nation magazine is on the Executive Committee of the NewsGuild of New York, TNG-CWA Local 31003. Shields organizes new members in the publishing industry, which has seen a recent surge in union activity. She talked about challenges workers face as they bargain for their first contracts after battling hostile employers.

Workshop organizers and CWA Next Gen Lead Activists Amanda Bratcher (District 3), Carissa Hahn (District 7), and Maddie Pettine (PHEW) explained how the PRO Act and PSFNA would make it easier for all workers to organize, to bargain, and to strike, and would create real, enforceable penalties for companies that violate labor law.

Secretary-Treasurer Steffens and CWA Telecommunications and Technologies Vice President Lisa Bolton, who directs the CWA Next Generation program, encouraged everyone to get involved in the fight to pass the PRO Act and the PSFNA. According to Hahn, "The fight to reform our broken labor law system is just gearing up."

For updates from CWA Next Generation, including information about upcoming workshops and opportunities to get involved in the fight for labor law reform, click here. 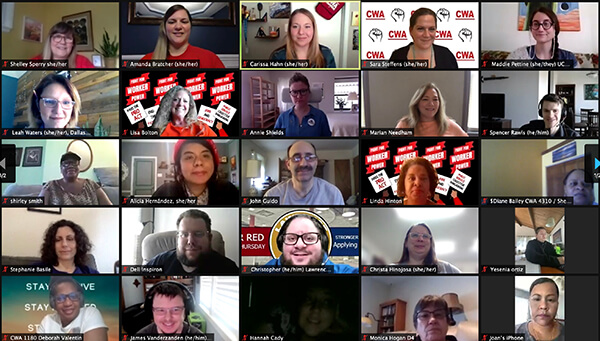 A group of more than 650 digital workers at the New York Times announced this week that they have formed a union with the NewsGuild of New York, TNG-CWA Local 31003. New York Times workers in the unit include digital designers, software engineers, product managers, and technical support professionals. A majority of the workers have signed cards in support of forming a union and have requested voluntary recognition by The Times. The NewsGuild-CWA currently represents over 1,000 members at the New York Times.

"We work at The Times because we believe deeply in the mission of the company," the workers wrote in their mission statement. "We believe that protecting the working conditions of employees is critical to the continued success of the mission. Collective bargaining is our way to ensure that we will be able to build The Times' world class digital products and platforms in a workplace that is more equitable, healthy, and just."

Violence Should Not Be Part of The Job

This week, the Workplace Violence Prevention for Health Care and Social Service Workers Act (H.R. 1195) is up for a vote on the House floor. The bill addresses workplace violence in the healthcare and social service sectors by directing OSHA to set safety standards and by requiring employers to implement a workplace violence prevention plan to protect employees from violent incidents.

The bill passed the House last year and was introduced in the Senate, where Mitch McConnell, who was Majority Leader at the time, refused to take action on it.

According to a report from the U.S. Bureau of Labor Statistics, health care and social service workers are five times as likely to experience injuries due to workplace violence than workers overall.

"Healthcare providers frequently care for aggressive and combative patients," said Sara Jungles, a member of Denver Health Workers United, CWA Local 7799. "It is so common for our patients to physically, verbally, and even sexually assault us that it becomes expected. Through all this, we are expected to stay focused on keeping our patients safe even over our own safety at times. We make jokes about our experiences to keep us disassociated and coming back to do it all over again tomorrow."

In a highlight of the gathering, local leaders led a workshop on building an anti-racist union. President Shelton praised the district's commitment to fighting racism in the union, at work, and in communities.

Vice President Roberts acknowledged the challenges all CWA members have faced during the COVID-19 pandemic, but reported that organizing had expanded despite those challenges. "In the past year, we've been organizing with Google workers, coders, gamers, athletes, newspaper staff, health care workers, campus workers, and non-represented workers in the telecom industry," she said. "We are broadening our base at CWA by diversifying who we organize!"

President Shelton recognized D7 activists who got creative in response to the unprecedented pandemic year, organizing workers in diverse industries, defeating anti-worker legislation, and electing pro-worker candidates up and down the ballot. He urged members to rally support for H.R. 1, the For the People Act, to protect voting rights for every American. He also asked everyone in D7 to mobilize for the PRO Act—a "game changer" that would truly protect the right of all workers to join a union, to bargain, and to strike.

"We fought the pandemic and we are winning," said Shelton. "We fought to elect a pro-union president and we did. And I know you will keep on fighting until every job is a union job and every worker is treated with respect and dignity."

Why Vice President Claude Cummings, Jr. Chose to Get Vaccinated

As vaccine availability increases across the country, thousands of CWA members and retirees are getting vaccinated, including CWA District 6 Vice President Claude Cummings, Jr. 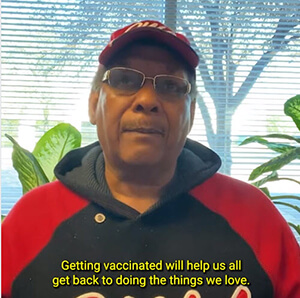 Check out the video to find out why Vice President Cummings chose to get vaccinated, hear about his experience getting the vaccine, and what he's looking forward to doing once we have beaten this pandemic.

If you haven't taken our vaccine survey yet, you can do so at cwa.org/vaccine-survey. We want to know what you think about COVID-19 vaccines, whether you have had a vaccination, plan on getting a vaccination, or do not want to get a vaccination.