Apr 8, 2021 - The PRO Act Means Stronger Contracts and other news

How the PRO Act Will Help Us Bargain Stronger Contracts

Although current federal law requires companies to bargain in good faith with the union chosen by their employees, CWA members know all too well the tactics employers use to drag out the bargaining process.

This is especially true when workers are fighting for their first contract. By failing to negotiate fair first contracts, employers prevent workers from realizing the full power of their union.

Recent rulings from the Trump NLRB mean that established collective bargaining agreements are at more risk than ever. The new rules allow an employer, within 90 days of contract expiration, to claim that the union no longer has majority support, stop bargaining, and announce it will withdraw recognition of a union when the contract expires.

The PRO Act addresses these problems. It establishes a process for reaching a first agreement when workers organize, employing mediation, and then, if necessary, binding arbitration, to enable the parties to bargain successfully.

Once workers have a contract, the PRO Act protects that agreement by requiring employers to maintain existing terms and conditions of employment while the contract is being renegotiated. This prevents employers from gridlocking the bargaining process and unilaterally implementing new terms or conditions of employment while bargaining is pending. The PRO Act would also eliminate employers' ability to withdraw union recognition during bargaining by overturning the Trump NLRB's rule.

Finally, this monumental bill would facilitate the establishment of a "fair share" clause between employers and unions to require all workers who are covered by the collective bargaining agreement to contribute a fair share fee towards the cost of bargaining and administering the agreement, even in so-called "right-to-work" states.

Tell your Senators to support the PRO Act at actionnetwork.org/letters/senateproact.

More workers than ever have been reaching out to CWA for help organizing a union at their workplaces. One of the first things they learn is that the process is challenging and time consuming because our current labor laws give bosses too much power to prevent workers from joining together in unions.

The Protecting Our Right to Organize (PRO) Act would change that. This Sunday at 1:00 p.m., EDT, don't miss the chance to hear from CWA Secretary-Treasurer Sara Steffens and workers who've been on the front lines of recent organizing campaigns about the barriers workers face when forming unions. At this CWA NextGen virtual workshop, CWAers will also learn how the PRO Act will strengthen our union by removing barriers to union membership and what we need to do to get it passed.

The workshop will feature NewsGuild-CWA activists Annie Shields of The Nation and Leah Waters of the Dallas Morning News. Click here to sign up! 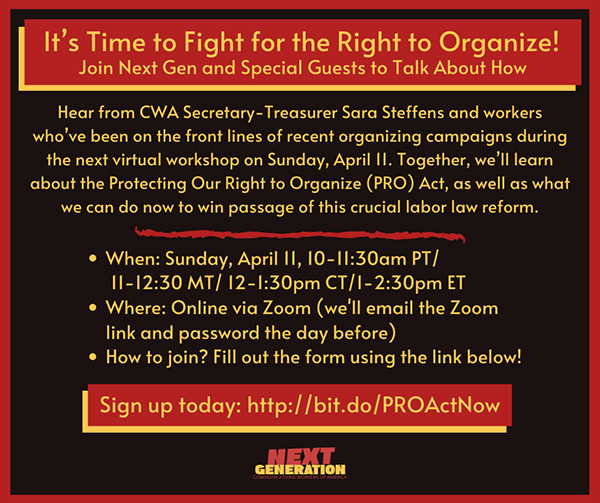 California Institute of the Arts

Faculty Technical Support staff at the California Institute of the Arts voted overwhelmingly to join CWA Local 9003. These new members faced many challenges in determining their unit and holding an election but are now forming a bargaining committee and assessing member priorities.

Why CWA President Chris Shelton Got His COVID-19 Vaccination

As vaccine availability increases across the country, thousands of CWA members and retirees are getting vaccinated, including CWA President Chris Shelton. 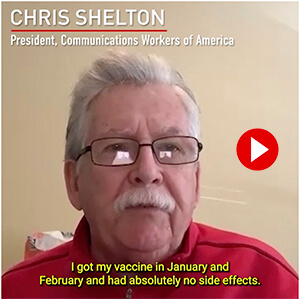 Check out the video to find out why President Shelton chose to get vaccinated and hear about his experience getting the vaccine.

If you haven't taken our vaccine survey yet, you can do so at cwa.org/vaccine-survey. We want to know what you think about COVID-19 vaccines, whether you have had a vaccination, plan on getting a vaccination, or do not want to get a vaccination.

Nearly 200 CWA District 1 stewards and Health and Safety workplace committee members in New Jersey participated in the third part of an eleven hour virtual training course last week. The course presented a union approach to health and safety with the goal of educating members about the science of COVID-19 transmission, as well as how to hold management accountable for ensuring a safe workplace. 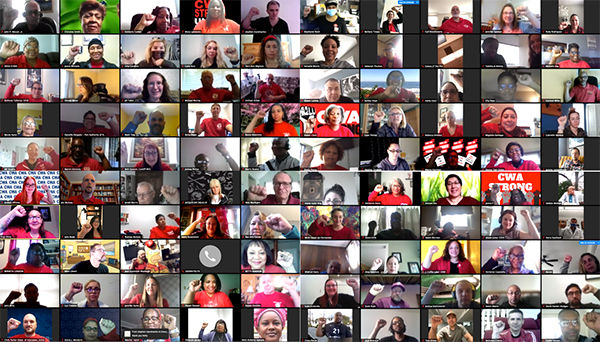 The central theme of the training series: informed and mobilized union members are the source of our power to protect us from this deadly pandemic. The training included a panel of rank and file leaders who shared the strategies they have used to engage members to take action on health and safety issues.

Jessica Coffin, CWA Local 1088 Mobilization Committee chair and steward, spoke about her members' struggle to pressure management to resolve the COVID-related health and safety issues at their county welfare agency. "After months of working in fear, and COVID back on the rise, we decided that enough was enough," Jessica told training participants. "We were determined to be safe and we combined our unique strengths to form a mobilization committee. We wanted to fight for the right to work from home. We wanted to keep our families safe. We made signs and stood out on the major highway where our buildings are located. After a week, our numbers began to grow and our pickets spread from one building location to three!"