Apr 1, 2021 - CWA Member Wins Settlement with Google and other news

What Would the PRO Act Do?

If we want to build our power in the workplace, we must make passing the PRO Act in the Senate our top priority. The PRO Act would remove many common obstacles that stand in the way of workers joining together in unions and ban some of the most commonly deployed union-busting tactics, like captive audience meetings. Once workers decide to form a union, the PRO Act would make it harder for employers to stall at the bargaining table and allow workers to engage in more powerful strikes.

For the next few weeks, we will be highlighting a portion of the PRO Act and what it would do for workers in the CWA newsletter.

The PRO Act would prevent employer interference with union elections.

Right now, the worker protections established in the National Labor Relations Act (NLRA) are totally inadequate. These laws were originally designed to ensure that workers can exercise their rights to organize unions and bargain collectively with their employer, but many of the coercive tactics that employers use to discourage workers from joining a union are still technically legal.

When workers decide to organize, companies often hold "captive audience" meetings, forcing workers to attend hours-long meetings to be berated and intimidated by management. Employers use these meetings as an opportunity to present misleading anti-union propaganda to pressure workers to vote against the union. Under current law, employees who refuse to attend captive audience meetings can be fired by their employers.

The PRO Act would address this issue by updating the NLRA to prohibit employers from requiring their employees to attend "captive audience" meetings or participate in anti-union activities. The bill would also give the National Labor Relations Board (NLRB) the power to set union election procedures, which would stop employers from being able to rig these procedures and set up organizing efforts to fail.

Tell your Senators to support the PRO Act at actionnetwork.org/letters/senateproact.

Check back next week for more PRO Act highlights!

PRO Act Stories: "I was fired for trying to unionize my workplace."

In a new op-ed, Jasmine Snyder, a bank worker who was fired from her job at the Pentagon Federal Credit Union for trying to organize her workplace as part of CWA's Committee for Better Banks project, shares her story of how she was targeted after she decided to take basic action to protect herself and her coworkers during COVID-19.

"With the PRO Act, instead of losing my job and income when I was fired, I would have been able to continue to work and be paid throughout the entire [unfair labor practice] process. PenFed wouldn't have been incentivized to drag out the proceedings, which ultimately forced me to accept a financial settlement rather than getting my job back, which was my intention," Snyder wrote. "One way to ensure real progress – for workers and our customers – is by passing the PRO Act."

Shannon Wait, a member of CWA Local 1400's Alphabet Workers Union (AWU) has won a settlement with Google and its contractor, Modis E&T. 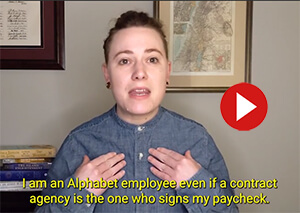 The settlement was reached after AWU filed an unfair labor practice charge against Alphabet (Google's parent company), Google, Modis, and Adecco with the National Labor Relations Board (NLRB) on behalf of Wait, a data center technician employed by Modis at Google's data center in Moncks Corner, S.C. The charge alleged that the companies prohibited employees, including Wait, from discussing pay with coworkers, suspended Wait for supporting the union, and told her that she was not allowed to join the union because of her status as an employee of a Google contractor.

After CWA Local 1400/AWU filed the unfair labor practice charge, Wait was reinstated within a week. Now, less than two months after the union filed the charge, the NLRB settlement means Google and Modis must post strongly worded notices informing all workers at the Moncks Corner data center that Wait's suspension has been fully rescinded, removed from her personnel file, and will not be used against her in any way. The notices also say that the workers have the right to discuss working conditions and organize with their colleagues and that the companies will not tell employees that they cannot discuss bonuses with other employees or that they are not allowed to be in a union because they work for a Google contractor.

"I'm ecstatic at this settlement, it's a huge win for me and all contract employees at Google and other Alphabet companies," said Wait. "It's far too easy for contractors like Modis to make us believe that we aren't allowed to publicly discuss our working conditions or join unions, and Alphabet and Google turn a blind eye to this gaslighting. Now, because I had the support of my union to call them out on it, they'll be forced to inform us all of our rights."

Yesterday, President Joe Biden announced his plan to rebuild our country, create millions of good, union jobs in the United States, and make sure that corporations pay their fair share of taxes.

Biden's Made in America Tax Plan reforms the tax code so that it creates incentives for investment in the United States​, no longer rewards corporations for sending jobs overseas, and restores the corporate tax rate to 28 percent.

By combining much-needed investment with a focus on increasing union representation and raising corporate tax rates, President Biden will ensure that our recovery from the pandemic helps working people first and foremost.

New Department of Labor Resources for Workers on Equal Pay

Under Labor Secretary Marty Walsh, the Department of Labor has revamped its website. The new site contains resources including an interactive equal pay and pay transparency map, an occupations and earnings tool, and much more.

Check it out here.

For Women's History Month, the AFL-CIO is featuring leaders who are making women's history across the labor movement on their blog.

Check out the post on CWA Secretary-Treasurer Sara Steffens here. 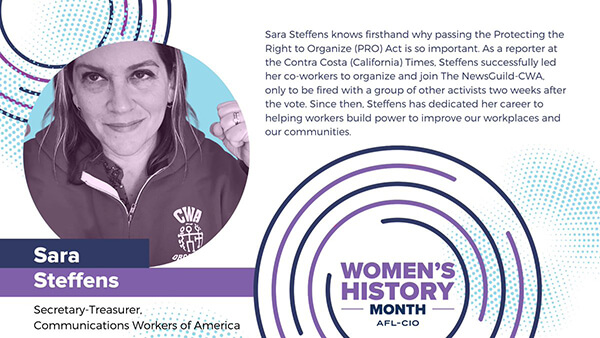 "Ready to Get Back to Normal": CWA Members Share Why They Are Getting Vaccinated

Members and retirees from across our union have been sharing their reasons for getting vaccinated against COVID-19.

One common theme: getting back to normal. CWAers are eager to get back to their usual routines, to travel, and to see friends and family members – especially grandchildren! As one retired member put it, "Too many people my age are dying. Plus we love to take trips, flying and cruising. We are ready to get back to normal, whatever that is."

We want to know what you think about COVID-19 vaccines, whether you have had a vaccination, plan on getting a vaccination, or do not want to get a vaccination. Take our survey at cwa.org/vaccine-survey. 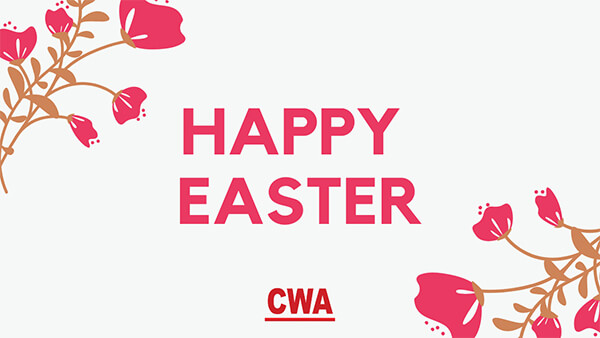