On Tuesday, with bipartisan support, the U.S. House passed the Protecting the Right to Organize (PRO) Act, one of CWA's top priorities for building worker power. The PRO Act would be a game-changer for millions of workers by making it easier to join unions, win first contract agreements, and engage in more powerful strikes. 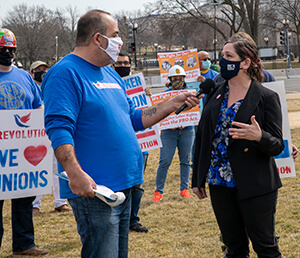 CWA Secretary-Treasurer Sara Steffens spoke in support of the PRO Act at a rally hosted by Our Revolution in Washington, D.C., on Tuesday.

President Biden has said he will sign the PRO Act as soon as it lands on his desk, making the fight in the U.S. Senate the key to giving working people the tools they need to regain power in their workplaces. While the PRO Act also passed the House during the most recent Congress, CWA activists did not take Tuesday's vote for granted. They worked tirelessly to make sure CWA members contacted their members of Congress about the importance of the bill. Their efforts paid off – not only did the bill pass, but three members of Congress who voted against the bill in 2020 voted for it this time.

"It's not just the laws about organizing a union that give too much power to management. It's also the laws that are supposed to protect workers when we bargain a contract or go on strike," said CWA Secretary-Treasurer Sara Steffens at a rally hosted by Our Revolution in Washington, D.C., on Tuesday in support of the bill. "The PRO Act changes that."

The PRO Act is just part of CWA's agenda to build worker power, which includes ending the filibuster in the Senate, securing stronger bargaining power for public sector workers through the Public Service Freedom to Negotiate Act, and expanding voting rights and loosening the hold corporate money has on our country with the For the People Act.

Click here​ to tell your Senator to support the PRO Act!

The ABC Network Negotiating Committee has agreed to an additional extension of the 2017-2021 Master Agreement. All terms of the current ABC contract will continue, and a 2 percent base pay raise will go into effect in October.

The Committee cited the ongoing COVID-19 pandemic as a concern for all parties, prompting the extension. The Committee plans to return to the bargaining table in late August or early September of this year.

The agreement contains many improvements including wage increases, enhancements to the dental and vision plans, improvements to vacation time, and more.

A majority of animators at Floyd County Productions (FCP), the largest animation studio in Georgia and best known for the animated program Archer, have announced that they are forming a union with CWA. The animators have been organizing for more than a year and are now calling for voluntary recognition from FCP.

"We are excited to work together as a collective to continue building a workplace where everyone receives their fair share and can thrive in a culture of mutual respect and transparency," said Margeaux McClelland, a 3D Texture Artist at the studio.

Journalists at McClatchy-owned The Tacoma News Tribune, The Olympian, The Bellingham Herald, and the Tri-City Herald in Washington have organized to form the Washington State NewsGuild and their unit has been voluntarily recognized by the company. The National Labor Relations Board (NLRB) had ruled that the journalists could be recognized as one unit in February. 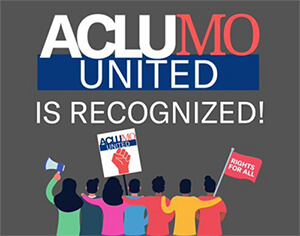 Staff at the American Civil Liberties Union (ACLU) of Missouri have joined United Media Guild Local 36047 and their unit, ACLU MO United, has been voluntarily recognized by the employer.

"We are glad that ACLU MO's leadership agrees forming a union is the right move for our organization, and beyond excited to start collective bargaining and fully join the labor movement," the workers tweeted.

Nineteen Parking Coordinators in New York City's film and television industry have joined CWA, and will be covered by the Master Agreement that 600 Parking Production Assistants (PPAs) have negotiated as members of CWA Local 1101.

Parking Coordinators and PPAs secure parking in the New York City area for film and television productions. Previously one of the few occupations in live-action television and film production not protected by a Collective Bargaining Agreement, Parking Coordinators now have just cause protections, overtime pay, pension and health contributions, standard grievance and arbitration procedure, and health and safety protections.

For the People: Campaign Finance Reform

To loosen the hold corporate money has on our country, we must build worker power, and to do that, we need the For the People Act. The bipartisan bill, which has been given the designation H.R. 1 as a sign of its importance, passed the House of Representatives last week and has moved to the Senate for consideration.

We have been sharing information in the CWA eNewsletter about how the bill ensures that eligible voters can participate in elections and reduces the role of large donations in political campaigns.

Over the past few weeks we highlighted how the For the People Act will give people more choices about where and when they vote, how it will update the voter registration process, and how it would protect voters.

The bill would also reduce the ability of corporations and extremely wealthy donors to control campaigns and our political process.

The For the People Act would restore voter power by leveling the playing field with a system of public financing that would match small donations of $200 or less at a rate of six to one. Further, it would create more transparency in campaign finance by requiring all organizations involved in political activity to disclose their large donors. These reforms would make political candidates less dependent on large donations by amplifying contributions from working people.

Laws regulating voting, the role of money in politics, and corporate lobbying have not kept up with changes in American politics. But corporate executives want to keep things the way they are so they can keep calling the shots. They're doing whatever they can, including spreading misinformation about the bill, to hold on to their power.

We can't let them get away with it. Tell your Senators that it is time to update our voting system to give every eligible voter the chance to vote. Click here to send an email.

Reminder: Apply for the Beirne Foundation Scholarship for 2021-2022

The CWA Joe Beirne Foundation will award 16 partial college scholarships of $4,000 each for two years. CWA members, their spouses, children, and grandchildren are eligible for the scholarships, including the dependents of retired, laid-off, or deceased members. 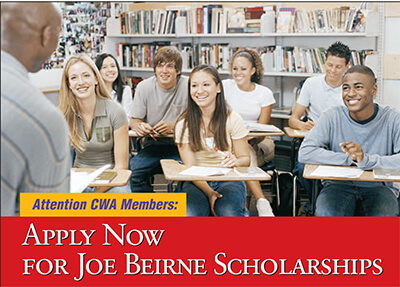 Now that several COVID-19 vaccinations are approved and vaccination programs are underway, we are making real progress toward reducing infections, illness, and death from the virus. But the danger is not over.

Visit cwa.org/covid for up-to-date information on protecting yourself from COVID-19 infection and answers to frequently asked questions about vaccination.