Feb 25, 2021 - Time to Acknowledge the Truth about COVID-19 Transmission, and other news

For the People: Removing Barriers to Voter Registration

To loosen the hold corporate money has on our country, we must build worker power, and to do that, we need the For the People Act. It is one of the most important bills that Congress will be considering, so over the next few weeks we will be sharing information in the CWA eNewsletter about how the For the People Act ensures that eligible voters can participate in elections and reduces the role of large donations in political campaigns.

Earlier this month, we highlighted how the For the People Act will give people more choices about where and when they vote. You can read that article here.

The For the People Act also addresses the voter registration process, which is one of our nation's greatest election administration hurdles. The outdated process that requires ink-and-paper forms is largely to blame. The For the People Act improves the voter registration process by making secure registration available online and giving voters the opportunity to register to vote on the day of the election. The act protects registered voters by limiting states' ability to purge registered voters from the eligibility list during federal elections.

Laws regulating voting, the role of money in politics, and corporate lobbying have not kept up with changes in American politics. But corporate executives want to keep things the way they are so they can keep calling the shots. They're doing whatever they can, including spreading misinformation about the bill, to hold on to their power.

We can't let them get away with it. Tell Congress that it is time to update our voting system so that every eligible voter can register​ to vote. Click here to send an email. 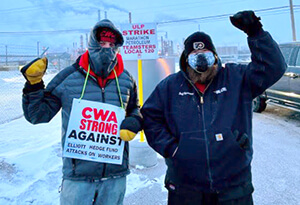 CWA members joined the picket line in support of locked out Marathon Petroleum workers in Minnesota.

CWA stands in solidarity with 200 Marathon Petroleum workers, members of Teamsters Local 120, who have been locked out by management after a 24-hour strike on January 22 at the St. Paul Park refinery in Minnesota.

In an effort to appease the predatory hedge fund Elliott Management, Marathon Petroleum is trying to cut union jobs and contract work out to push up the company's stock prices. CWA members know Elliott's tactics well from its attempts to extract short-term cash from companies like AT&T and Frontier Communications, and they are disastrous for workers.

Marathon's other cost-cutting measures have included increasing workloads on high-intensity positions to the point where union representatives raised safety concerns for both workers and the local community. Marathon should end this lockout now and reject Elliott Management's anti-worker demands.

CWA is joining 44 allied unions and organizations in urging the U.S. Centers for Disease Control and Prevention (CDC) to update its COVID-19 guidance to fully reflect the latest scientific evidence regarding SARS-CoV-2 transmission through aerosols that infected people emit when they breathe, speak, cough, sneeze, or sing.

Under the previous administration, the CDC’s refusal to recognize aerosol transmission of SARS-CoV-2 led to weak guidance, leaving workers and the public unprotected from COVID-19. As a result, countless workers in every industry – including health care, grocery, meatpacking and processing, warehousing, food service, education, transportation, and manufacturing – have been infected, hospitalized, and died from COVID-19 because their employers followed weak CDC guidance.

Recognizing the scientific evidence and making these changes are essential and necessary steps to bringing the COVID-19 pandemic under control. 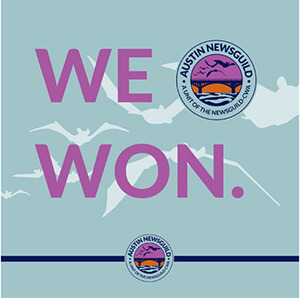 This week, journalists at the Gannett-owned Austin American-Statesman voted to form the Austin NewsGuild.

“We’re excited to move forward with a voice in our future and to continue to #KeepAustinInformed,” the organizing committee tweeted when the results were announced.

Employees of the Missouri ACLU announced last week that they are joining the United Media Guild/NewsGuild-CWA Local 36047.

“As we continue to build a more perfect union, and in the spirit of the ACLU, we expect our union to be recognized and look forward to beginning the bargaining process,” the organizing committee said in a statement.

Workers at HuffPost Canada and Huffpost Quebec filed for union certification with the Canada Industrial Relations Board (CIRB) on Tuesday after a majority of staffers signed cards showing support for joining CWA Canada.

“In an increasingly unstable industry, we want to solidify what we love about working at HuffPost, as well as improve conditions for both current and future employees,” organizing committee members said in a statement.

CWA Canada President Martin O’Hanlon welcomed the group: “These are tough times in the media industry and it is more important than ever that people have a real say in their workplace – for their own good and for the success of the company,” he said.

Journalists at 11 daily newspapers owned by the Southern California News Group announced Wednesday plans to join TNG-CWA. The SCNG is owned by Alden Global Capital’s MediaNews Group, the New York-based hedge fund notorious for slashing newsroom budgets to the bone. Last week, Alden Global announced a $630 million deal to buy Tribune Publishing newspapers, even as it refuses to invest in its own newsrooms.

“Our journalists have labored for years under increasingly difficult conditions. We intend to reverse that trend,” members of SCNG Guild said in a statement announcing their plans.

On Monday, essential workers across the country held a series of "Moral Monday" rallies outside of state offices of U.S. Senators in support of a $15 per hour minimum wage, the elimination of the subminimum wage for tipped workers, union rights for all, and full and just COVID-19 relief. The events were organized by CWA, the Poor People’s Campaign, SEIU, One Fair Wage and other allies, and livestreamed online.

"I only receive the bare minimum required by law for my job as a federal contractor worker, just around $11 an hour for complex work," said Tonya Jackson, who works at a Maximus call center as a home health aid for supplemental income. "When your employer pays you the legal minimum, whether the criminally low federal minimum wage of $7.25, or the minimum amount the federal government has set for its contractors' employees, it tells you something. It tells you that your employer would gladly pay you less if they could get away with it."

Maximus employs one of the largest federally-contracted workforces in the country, under a contract with the Centers for Medicare and Medicaid Services (CMS), to operate call centers that handle Medicare and ACA Federally Facilitated Marketplace calls. Maximus workers at the CMS call centers are organizing to join the CWA to win better working conditions and a voice on the job.

"A $15 minimum wage and expanded union rights would go tremendously far in ensuring frontline workers – the backbone of our economy – can put food on the table going into year two of the COVID-19 pandemic," said CWA Secretary Treasurer Sara Steffens. "It is no secret that families and communities everywhere are struggling now more than ever, and they deserve the promise of good benefits and dignified wages. As they work day in and day out – at times risking their own health – to get America back on track, a living wage is the least our government can do, and the only thing that will help our economy and communities recover and thrive." 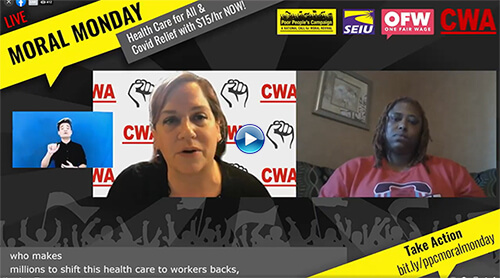 CWA Secretary-Treasurer Sara Steffens (center) and Tonya Jackson (right), a Maximus worker who is organizing to join CWA, were featured on a livestream of “Moral Monday” rallies in support of a $15 per hour minimum wage.

Last Sunday, the CWA Next Generation program hosted a virtual workshop on the topic of "Non-Contract Union Organizing." Next Gen lead activist for the Public, Health Care, and Education Workers sector and CWA Local 7799 member Maddie Pettine moderated a lively discussion featuring a panel of young members from three locals without collective bargaining agreements. Allison Becha, a member of United Campus Workers-CWA (UCW-CWA) Local 3865 in Knoxville, Tenn; Brian Palomo, a member of UCW-Arizona/CWA Local 7065 in Tucson; and Chewy Shaw, a member of Alphabet Workers Union/CWA Local 1400, which represents workers at Google and other Alphabet companies, each explained how their unions are fighting for, and winning, worker power by organizing around issues of importance to young workers.

For example, members at UCW-CWA in Tennessee are fighting for a graduate fee waiver in a state with some of the highest fees in the nation. Shaw and his co-workers are shining a light on unfair labor practices by Google against low-wage data center workers, demonstrating that it's not necessary to have a contract in order to hold corporations accountable. Brian's local has only been up and running since last August, having organized in the midst of the pandemic. He talked about the creative strategies he and his co-workers have devised to organize while social distancing in the COVID era.

In thanking the panelists and the participants who joined on a Sunday, CWA Telecommunications and Technologies Vice President Lisa Bolton, who directs the Next Gen program, said the minority or non-contract approach to forming a union, while unfamiliar to many of us, is an important tool for organizers. "It's these kinds of creative approaches, often taken up by young workers, that will help us build real power for working people."

As part of the Fight Back Film Series, CWA Next Gen will host a watch party this Sunday, February 28, at 1pm Eastern, featuring the new film "One Night in Miami" in honor of Black History Month. To join, click here. For updates on upcoming virtual workshops and other Next Gen initiatives, follow along on Facebook, Instagram, and Twitter.

CWA Joins with Workers in the Philippines to Show Solidarity

In the Philippines, the Rodrigo Duterte regime will stop at nothing in its efforts to use violence and intimidation to target working people. Things have only gotten worse for Filipino workers and union activists during the pandemic, as they fight against dangerous, unsafe conditions that put their lives in jeopardy on the job. 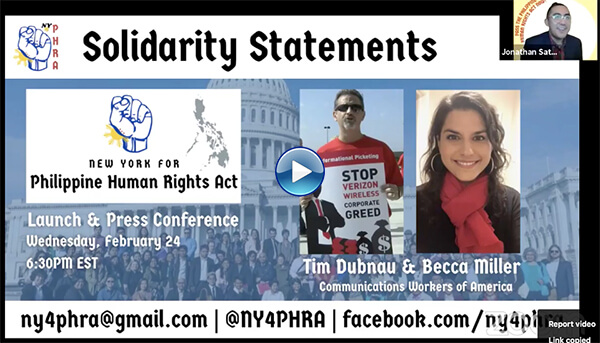