You Shouldn’t Need to Run a $10,000 Ad to Get Quality Internet Access

This week at a congressional hearing, CWA President Chris Shelton testified on the failure of telecom companies to upgrade their networks and called on Congress to take action to expand broadband access.

"We are living in an America where if you have ten thousand dollars to spend on an ad in the Wall Street Journal, you can get quality internet access at home," Shelton said, referring to 90-year-old Aaron Epstein's successful effort to get AT&T to install high speed fiber internet service at his home in North Hollywood, Calif. "But if you’re a single mom struggling to pay the bills, your children have to sit in a McDonald’s parking lot using the free wifi to do their homework."

He urged Congress to pass an infrastructure bill that will expand broadband access and create and protect good jobs, as President Biden has laid out in his plan to build back better, and called for Congress to strengthen the Lifeline program and protect the millions of low-income consumers who rely on it by modernizing Lifeline's funding mechanism to ensure the sustainability of the program.

On Wednesday, journalists at the Gannett-owned newspaper, The Desert Sun, in Palm Springs, voted overwhelmingly to join Media Guild of the West, TNG-CWA Local 39213, through mail-in balloting that was supervised by the National Labor Relations Board.

"This win is big because it reaffirms what I already know: our reporters, photographers, and producers are united behind our steps to better the newsroom," photographer and videographer Vickie Connor said. "I'm excited because I know we will bring this winning energy to the bargaining table to fight for the changes we want and need."

Comedy educators at The Second City in Hollywood, Calif.; Chicago, Ill.; and Toronto, Ontario, have filed for union certification as the Association of International Comedy Educators (AICE). Educators in Hollywood will be represented by CWA Local 9400 and those in Toronto by CWA Canada. Chicagoans will be represented by Illinois Federation of Teachers. The Second City was recently acquired by private equity company ZMC.

The Second City has been a training ground for generations of Canadian and American humorists. Alumni include Stephen Colbert, Tina Fey, Tim Meadows, Rick Moranis, Joan Rivers, and Amber Ruffin.

The organizing campaign focused on anti-racism and intersectional justice. In the AICE mission statement, organizers said they were creating a union "to guarantee equitable and just working conditions for all The Second City teachers and facilitators in Chicago, Hollywood, and Toronto." CWA Canada President Martin O'Hanlon voiced strong support for the new members, saying "The best way to improve quality, morale, and diversity is to give workers a stronger voice and the power to negotiate."

The Communications Workers of America (CWA) is applauding Joe Biden’s announcement that he has selected Jennifer Abruzzo to be NLRB General Counsel. Abruzzo, currently the Special Counsel for Strategic Initiatives at CWA, has many years of experience working for the NLRB in various roles, including Acting General Counsel and Deputy General Counsel.

“There is no one who has a more thorough grasp of the National Labor Relations Board and the purpose of the National Labor Relations Act than Jennifer Abruzzo,” said CWA President Chris Shelton. “She is a brilliant attorney who understands how the actions of the NLRB impact the daily lives of people at their workplaces. President Biden’s selection of Jennifer as the NLRB General Counsel shows that under his watch, issues affecting working people will be handled by people like Jennifer who have dedicated their lives to helping workers -- and not union busters like we saw during the Trump administration. We hope Jennifer’s confirmation process is speedy -- working people need her at the helm of the NLRB now more than ever.”

Two years ago, AT&T moved 100 call center jobs out of Meriden, Conn., presenting workers with an impossible decision: uproot their lives and move to Georgia or Tennessee, or lose their jobs.

CWA Local 1298 members are fighting to prevent it from happening again. On February 9, CWA Local 1298 leadership testified before the Connecticut Labor and Public Employees Committee to advocate for An Act Concerning Call Centers and Notice of Closure (H.B.6383) which would stop companies from sending jobs out of state by requiring companies that intend to relocate 30% or more of their annual call volume out of Connecticut to notify the Labor Commissioner; ending grants, loans, and tax benefits for companies that move at least 30% of calls out of state; and requiring all state agencies to ensure that all business-related call center work is performed by companies located in Connecticut.

"One call center closing can devastate an entire community," CWA Local 1298's Jim Case testified. "The core of this bill is simple: no State taxpayer money should be used for companies that ship our jobs out of the state." 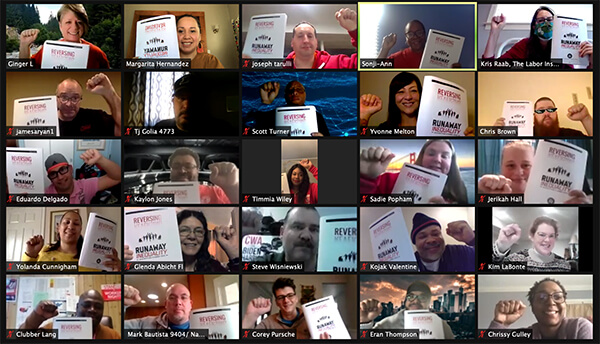 Twenty-five CWA activists from across the country participated in a training session last week to learn how to run CWA's "Reversing Runaway Inequality" workshops that focus on the growing gap between the super-rich and ordinary workers, how the 1% uses race to divide working people, and how we can fight back against inequality and level the economic playing field. The new trainers join a cohort of 50 experienced Reversing Runaway Inequality trainers who will be leading workshops to educate and mobilize members to pass the PRO Act and state legislative bills to help reverse runaway inequality.