Join Us Tonight for a PRO Act Virtual Town Hall

It's time to build worker power! Join us tonight at 7pm Eastern for a virtual town hall co-hosted by CWA, the AFL-CIO, and the International Union of Painters and Allied Trades (IUPAT), as union members start a big push to pass the Protecting the Right to Organize (PRO) Act.

The event will be livestreamed here.

CWA members have worked tirelessly to build support for the Protecting the Right to Organize (PRO) Act. (Photo taken before COVID-19.)

Joe Biden announced last week that Boston Mayor Marty Walsh will be his nominee for Secretary of Labor.

Walsh is a longtime union member and labor leader, and a great choice to serve as Biden's Labor Secretary for working people. He will be a welcome contrast to Trump's Labor Secretary, Eugene Scalia, who spent his entire career busting unions and even defended Cablevision when it fired 22 CWA members for protesting the company's refusal to bargain a fair contract.

"Nearly every policy that Joe Biden has proposed includes a focus on strengthening the middle class and making sure workers have the freedom to join together in unions to stand up for themselves and improve their workplaces. By choosing a union member and union leader who is as trusted, experienced, and effective as Mayor Walsh, President-elect Biden has shown that he means what he says. Having Marty Walsh as a member of the Cabinet means that working people will have one of their own in the room and at the table every time a decision is made that affects their lives," CWA said in a statement.

CWA leaders will be featured on panels at the AFL-CIO's MLK Civil and Human Rights Conference, which will be held virtually this week:

Learn more about the conference and register at themlkconference.org.

MLK Day for All Virtual Rally

Last year, Lumen sent an email to its workers saying that in 2021, Martin Luther King, Jr. Day will be a paid holiday for the first time in the company's history, but only for non-union employees.

A delegation of African American workers sent a letter to Lumen Technologies CEO Jeff Storey this week, asking that he designate the federal Martin Luther King, Jr. Day as a paid holiday for all Lumen workers.

"This decision directly undermines Dr. King's legacy of fighting for civil and labor rights," the CWA members wrote. "We are asking you to make it right and extend the MLK paid holiday to all Lumen workers."

Join us on Martin Luther King, Jr. Day, Monday, January 18, at 8:30 pm ET, for a virtual rally to demand Lumen give MLK Day as a holiday to all workers. We will hear from CWA members, elected leaders, and community allies.

CWA for Black Lives t-shirts and hats are now available in the CWA online store. Place your order here. Show your CWA pride and your support for racial justice! 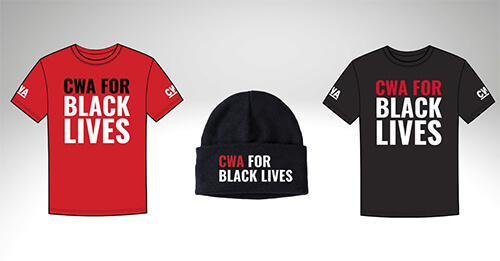 CWA issued a statement on Wednesday calling for corporations to demand refunds from and cease contributions to the Republican Attorneys General Association (RAGA), which played a key role in promoting last week's riots, and to cease all political support to groups like the National Republican Congressional Committee (NRCC), National Republican Senatorial Campaign Committee (NRSCC), the Republican National Committee (RNC), their affiliated SuperPACs, and other political organizations that provide financial and campaign support to those 147 Republican Senators and Representatives.

CWA is also calling on corporate leaders to support H.R. 1, the For the People Act, to reform our democracy by making voting easier and more accessible, changing the role of money in politics, and eliminating partisan gerrymandering.

NewsGuild-CWA and NABET-CWA Condemn Violence at the Capitol

In a statement issued last week, the NewsGuild-CWA and NABET-CWA condemned the insurrection at the U.S. Capitol, calling it "a threat to our democracy and an assault on our country's press freedoms."

"Yesterday was an absolute embarrassment for the U.S.," said NewsGuild-CWA President Jon Schleuss. "It's the role of the free press in a democracy to report, give context, and inform the public, especially during times of chaos. The world witnessed the assault on our democracy thanks to the courageous work of journalists who put themselves in harm's way to report the news. I saw what the rest of the world saw – a deluded mob invading our house of democracy in an attempt to subvert an election."

"Physical assaults or attacks of any type against journalists, reporters, camera crews, and technicians are despicable, offensive, and unlawful. These incidents should be fully investigated, and offenders should be prosecuted with maximum impact," said NABET-CWA President Charles Braico.

The Pittsburgh and Toledo locals of The NewsGuild-CWA are charging their papers' owners with manipulating news coverage of Wednesday's riot at the Capitol to paint President Donald Trump in a positive light and to muddy the waters about who was responsible for the mayhem. The papers, the Pittsburgh Post-Gazette and the Toledo Blade, are owned by brothers John and Allan Block, and endorsed Trump for president in the 2020 election.

Blade Executive Editor Kurt Franck issued an edict to web staff telling them not to refer to rioters in Washington as Trump supporters, "despite the event being Donald Trump-branded, and one the president appeared at and encouraged,” the locals said in a press statement.

Nolan Rosenkrans, a Blade reporter and president the Toledo Newspaper Guild said, "There was a systemic effort by management at the Blade to downplay the forces at work yesterday for political purposes."

These events demonstrate the importance of the union, Rosenkrans said, because "they give us the power to speak out against unethical acts by ownership in a fight for ethical journalism."

Facing threats from unruly mobs in the wake of last week's attack on the U.S. Capitol, Flight Attendants have called for increased enforcement of safety regulations and for the Transportation Security Administration (TSA) and the FBI to add "violent perpetrators" who participated in the Capitol riots to the federal No-Fly List.

"First strike and you're out," said AFA-CWA International President Sara Nelson. "We applaud FAA Administrator Dickson for taking this clear stand for our safety and security. This will help serve as a deterrent to unruly passengers who had been bucking the rules of aviation safety. We continue to work with our airlines, the FAA, the TSA, and law enforcement to keep our skies safe."

In a complaint to the Federal Communications Commission, Fuse Media, a Latino-owned and managed cable network, has alleged that AT&T is forcing it off of its distribution platforms in favor of programming from WarnerMedia, which is owned by AT&T.

Fuse says that positive relations with AT&T over a 15-year period changed in 2018 when AT&T purchased Time Warner Media, whose offerings include TBS, TNT, CNN, Adult Swim, and truTV. Since then, AT&T has ignored Fuse's requests to enter renewal discussions and only responded after Fuse threatened FCC action. Fuse says when AT&T did respond, its renewal offer was "untenable and likely unserious."

The result of losing its distribution on AT&T platforms, Fuse concludes, would be bankruptcy and the elimination of "a vibrant voice speaking to, and for, the multiethnic, multicultural community, especially Latinos, Afro-Latinos, and African Americans."

In December, CWA filed FCC comments in support of Fuse Media's complaint. CWA supported AT&T's acquisition of Time Warner with the expectation that it would lead to the creation and protection of good jobs in the United States. But after the deal closed, CWA saw a similar shift in AT&T's willingness to honor its commitments. For instance, AT&T failed to respect the agreement it made with CWA to ensure the organizing rights of employees at acquisitions like Time Warner.

As CWA says in its filing in support of the Fuse complaint, "The reason for this appears simple: like how it apparently views independent programmers that compete against the Turner networks for advertisers and viewers, AT&T apparently views union jobs at these holdings as a threat to AT&T's bottom line."