Earlier this week, CWA members at AT&T's call center in San Diego, Calif., refused to enter the building due to a dangerous COVID-19 outbreak. Nearly 40% of the workers on the center's fifth floor have become infected with the coronavirus or developed symptoms since mid-November. Worksite mapping done by CWA Local 9509 shows a high probability that infected workers were exposed at the center.

CWA has requested that Cal/OSHA investigate AT&T's handling of the outbreak. Under California's strong standards, AT&T is required to have effective policies to address unhealthy conditions and to provide free COVID-19 testing when there are multiple infections at a worksite.

The outbreak in San Diego follows an outbreak in an AT&T center in Tustin, Calif., in late October. AT&T has been slow to implement systems to allow call center workers to work from home, even though it's clear that the call center environment puts workers at risk for COVID-19 exposure.

Lumen Technologies, formerly known as CenturyLink, recently informed its employees that while non-union workers are being given Dr. Martin Luther King Jr. Day as a paid holiday, its CWA-represented union members will not be.

"If Lumen executives care for diversity and inclusion, they must correct the wrongful exclusion of union workers from the holiday," said CWA District 7 Vice President Brenda Roberts. "Dr. King was assassinated while in Memphis organizing for workers' rights, and throughout his life, workers' rights were a core part of his work. It is deeply wrong to give this holiday to non-union workers and withhold it from union workers."

"It is against Dr. King's message and legacy to exclude union workers from the holiday," said CWA Vice President of Telecommunications and Technologies Lisa Bolton. "To use a holiday that honors our country's most important civil rights and labor rights figure as a bargaining chip to pit union and non-union workers against each other is a petty slap in the face to all working people."

Sign the petition to let Lumen know that it is unacceptable to exclude union workers from the Martin Luther King Day holiday. 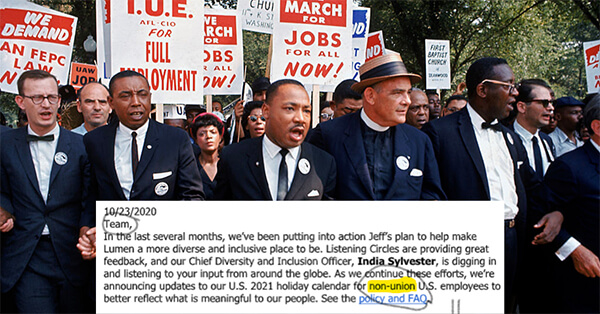 Joe Biden has started off his presidential transition process with good news for workers. His pick for Treasury Secretary, Janet Yellen, not only understands the impact of economic policies on working people, but she actively engages with us. When employees at Wells Fargo raised concerns about the toxic sales culture that led to the creation of fraudulent accounts, Yellen listened to the front line bank workers, and held Wells Fargo's leadership accountable for defrauding customers. Biden's picks for the Council of Economic Advisers, Jared Bernstein and Heather Boushey, will bring workers' perspectives and a focus on addressing inequality, guided by the historic leadership of Cecilia Rouse, the first African American to chair the CEA. 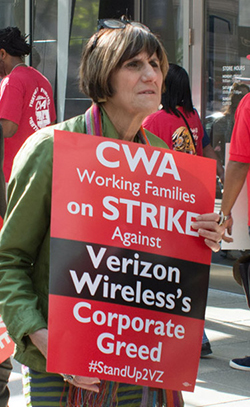 CWA continues to weigh in on key administrative appointments. In a letter sent this week, CWA President Chris Shelton urged Biden to appoint Commissioner Jessica Rosenworcel as Chair and Debbie Goldman as Commissioner at the Federal Communications Commission (FCC), citing their significant qualifications and deep commitments to consumers and workers in the telecommunications industry.

In other good news, Representative Rosa DeLauro (D-Conn.) has been elected chair of the influential House Appropriations Committee. DeLauro is a true champion for working families. She led the fight to stop the disastrous Trans-Pacific Partnership (TPP) trade deal, introduced legislation requiring paid leave, and has supported CWA members on countless other issues including protecting call center jobs and walking the picket line with striking Verizon workers.

CWAers Get Out the Vote for January 5 Georgia Runoff 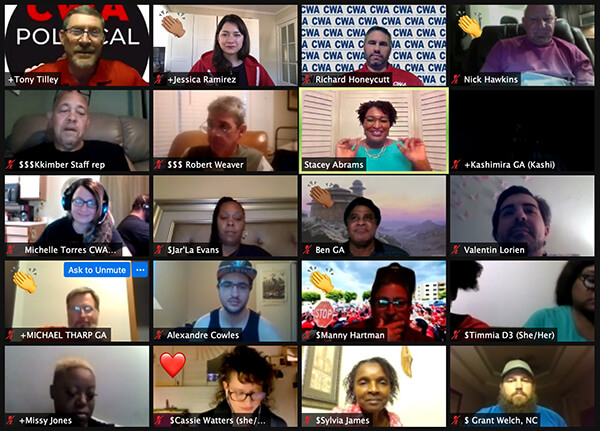 On January 5, Georgia will hold a runoff election for two U.S. Senate seats. The result will determine whether Mitch McConnell will be able to continue blocking popular legislation that puts the needs of working people ahead of corporate profits. Georgia CWAers are phonebanking to get out the vote for pro-worker candidates Jon Ossoff and Raphael Warnock. Last week, they were joined by special guest Stacey Abrams!

Where's the Relief for Airline Workers? 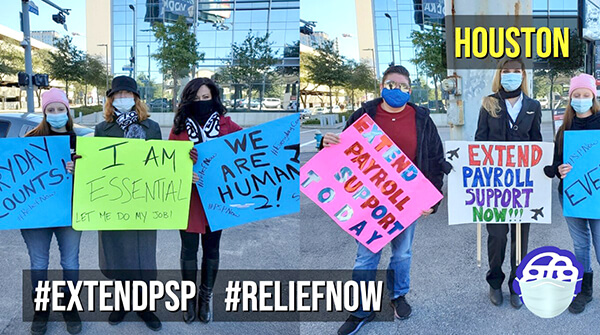 Airline workers, including CWA passenger service agents and AFA-CWA Flight Attendants, are putting pressure on the U.S. Senate to act now to pass a comprehensive COVID relief package that would include an extension of the job-saving Payroll Support Program. AFA-CWA members and allies rallied in Houston, Chicago, and L.A. this week to demand that Congress extend the PSP.

Join Us Today for a Democracy Reform Activist Training

In 2021, we have a real shot at making historic progress at strengthening our democracy by getting the For The People Act (H.R.1), the most sweeping set of reforms to our democracy seen in a generation, signed into law.

The For The People Act aims to accomplish three goals: (1) protecting and strengthening the right to vote, (2) ending the dominance of big money in politics, and (3) implementing anti-corruption, pro-ethics measures to clean up our government.

Help be a part of this transformative push by attending a Declaration for American Democracy webinar featuring U.S. Rep. Sharice Davids TODAY at 6pm ET.

You can register for the Zoom webinar by clicking here.