For weeks, aviation workers have been loudly sounding the alarm bell on the phones and in the streets to Senate Republicans: if they didn't extend the Payroll Support Program (PSP) that was part of the CARES Act, thousands of passenger service agents and Flight Attendants were guaranteed to lose their jobs on October 1st. We knew this was a hard deadline to avoid mass layoffs, and that's why we put every effort into making sure Senators knew they had to act.

Now it's October 1st. Thousands of workers across the country will begin receiving their layoff notices today because Mitch McConnell refuses to bring a comprehensive COVID relief package to the floor for a vote that would include extending the PSP program, reinstating expanded unemployment benefits, and providing support for state and local government. Last week, Sen. Rand Paul (R-Ky.), Sen. Pat Toomey (R-Penn.), and Sen. Rick Scott (R-Fla.) even blocked an attempt to unanimously pass a standalone bipartisan bill extending the PSP program through March.

It is unconscionable and un-American for McConnell and Senate Republicans to choose to leave thousands of workers across the country with no paycheck and no health insurance during a pandemic. 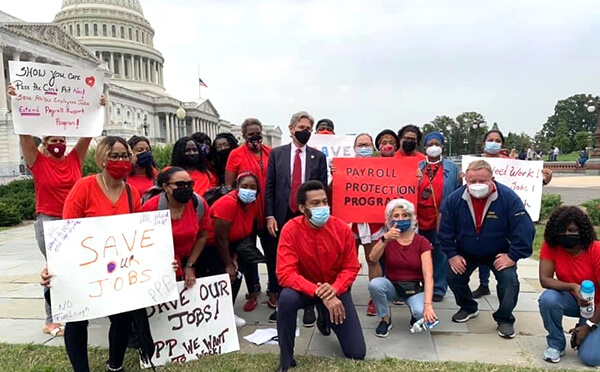 Passenger service agents from CWA Local 1171 took their message to Capitol Hill on Thursday, taking the 5AM bus to Washington, D.C., and meeting with members of Congress, including Rep. Tom Malinowski (D-N.J.) (center), to send a message to Congress that we need to protect airline workers' jobs, public health, and critical public services NOW!

We Must Fix Our Broken Senate

It is clearer than ever that the U.S. Senate is badly broken and needs to be fixed. The House of Representatives has passed hundreds of bills that would help working families, but Mitch McConnell has blocked them all. Thanks to him and the Republican-controlled Senate, airline workers are facing mass layoffs and our state and local governments are grappling with enormous deficits.

On Wednesday, CWA and progressive allies held a virtual town hall featuring Senators Elizabeth Warren and Jeff Merkley and other activists discussing action steps we can take to fix the Senate.

"One clear economic truth – an economic fundamental – is that when workers are able to join unions, and when those unions are strong, inequality goes down, the economy grows, and we're all better off," said CWA's Senior Director for Government Affairs and Policy Shane Larson on the call. "If Democrats win in November and we fight for the PRO Act and other pro-worker legislation, we won't need to go beg Mitch McConnell for permission just to have a debate about it. If we don't fix the Senate, workers will never, ever see the progress they need."

On September 26, Donald Trump announced his pick for who he wants to try to rush through the confirmation process for the Supreme Court: Amy Coney Barrett. Barrett has a track record of giving more power and control over our lives to corporations and leaving working people behind, including siding with corporate interests more than 75% of the time on the 7th Circuit Court of Appeals.

Barrett has ruled that corporations are entitled to set job requirements that exclude older workers and that they may segregate workers at different locations by race. Barrett has also expressed support for striking down the Affordable Care Act in its entirety, ending protections for people with pre-existing conditions.

"Donald Trump and the Senate Republican Majority can't seem to find the time to vote on the HEROES Act to provide relief to the millions of Americans who face financial collapse, but they are rushing to confirm a justice who will use any excuse to undermine worker power, putting fair wages, health and safety on the job, and the freedom to join a union at risk for a generation," CWA President Chris Shelton said in a statement. "Donald Trump is counting on Amy Coney Barrett to support his attempts to undermine the upcoming election. We must not let that happen. Make a plan to vote, safely and securely, and ensure your vote is counted. Our democracy depends on it."

Keep Getting Out the Vote for Joe Biden and Kamala Harris

The votes that we cast as union members will be crucial in ensuring we have pro-labor candidates elected at the local and state levels, all the way up to the White House. We know Joe Biden is the clear choice to fight for union members. But this election will be close and we have to do all we can to make sure we defeat Trump in November!

Join hundreds of volunteers across the country to get out the vote for Joe Biden and Kamala Harris during CWA's National Nights of Action: Oct. 6, Oct. 13, Oct. 20, and Oct 27. Join us wherever you are – we will send you information on how to connect online after you RSVP. We'll kick off each phone bank via Zoom with a brief training and Q&A before making calls together.

CWA President Chris Shelton will present the award to Rosenworcel during a web broadcast on Tuesday, October 6. Journalist Vicky Nguyen and District of Columbia Attorney General Karl Racine will also be honored at the event.

Rosenworcel has welcomed CWA members into her office to get a perspective on what is happening in telecommunications and media from people who are on the front lines. She raised the concerns of workers at the Commission when Republicans pushed and adopted a "One Touch, Make Ready" pole attachment regime that risks worker and public safety, and in some locations violates workers' collective bargaining agreements. She has worked to maintain media diversity, localism, and competition in the broadcast industry when Sinclair Broadcasting Group tried to purchase Tribune Media, a deal that would have created a broadcast behemoth and resulted in significant job losses.