Take Action Now to Save Our Aviation Jobs

There are only 13 days left before the aviation Payroll Support Program (PSP) in the CARES Act expires on September 30th. Thousands of CWA members have received furlough notices in the last few days, but it's not too late to fight for those jobs! Congress can still pass a clean extension of the PSP program to keep thousands of workers on payroll.

Our Senators need to hear from us every single day until there's a deal to save airline jobs!

Last week, journalists at The Hilton Head Island Packet and Beaufort Gazette announced that they are forming the Packet/Gazette Guild. More than 80 percent of eligible reporters, photographers, and producers at the newspapers, both owned by McClatchy, signed cards authorizing union representation by the Washington-Baltimore News Guild/CWA Local 32035. Two days later, President and Editor Brian Tolley announced the company would voluntarily recognize the union – the first voluntary recognition by a McClatchy publication in recent years.

"I'm proud of the work that I do at the Packet, and I'm equally proud of the efforts my colleagues and I are making to improve our workplace," said Rachel Jones, an education reporter and a member of the union organizing committee. "Creating these protections for our newsroom will ultimately lead to better coverage of Beaufort County, and it's an honor to lead the way in organizing for the Carolinas."

Digital employees of People Magazine voted last week 45-3 in favor of joining the NewsGuild of New York/CWA Local 31003. As a result of the vote, digital workers at People will join their print colleagues, who have been represented by the NewsGuild for decades.

Digital staffers are seeking to close the arbitrary "print-digital divide" and negotiate a contract that extends the same robust benefits and protections the magazine's print staffers have enjoyed for years to everyone in the newsroom.

"The experience of People digital working together as a group to help secure a future for ourselves – and our publication – has been an inspiring and rewarding process," said Staff Crime Editor Laura Barcella. "We're all looking forward to finally securing a strong contract with Meredith."

Greg Hanlon, Crime News Editor, said, "We're proud we came together as a newsroom to secure the future of People. As a staff, we feel empowered – and we believe an empowered, united staff is one that will produce the best-quality work."

On August 31, CWA Local 1032 won card check recognition for 32 operators, mechanics, and laborers employed by the Ewing-Lawrence Sewerage Authority. Workers reached out to CWA because they wanted the solidarity and support of a union with experience representing public sector workers in New Jersey.

On Tuesday morning, members of the United Campus Workers of Georgia-CWA Local 3265 held a protest at the Board of Regents meeting in Atlanta to raise concerns about unsafe working conditions and staffing levels at public institutions of higher education in Georgia.

As COVID-19 cases rise on campuses across the state, union members are making an urgent call for the Board to commit to no layoffs during the public health emergency, when more staff positions need to be filled in order to keep students, workers, and communities safe.

UCW members also have significant concerns about accountability and transparency at the board, in light of new information about campus housing provider Corvias Campus Living, LLC, and in response to USG's delayed response to the union's open records requests.

Since raising the alarm in August that in late May Corvias pressured the board about reopening plans, UCWGA has been working to understand the role Corvias plays at the board and on Georgia's public campuses.

"With private companies looking to cut costs, we're looking for an assurance that the university system is acting in our best interests by prioritizing health and safety, quality education, good jobs with health insurance during a pandemic, and hazard pay for essential workers on the frontlines of cleaning and care in dormitories and across campus," said Brett Tregoning, a graduate worker in the Physics department at Georgia Tech. 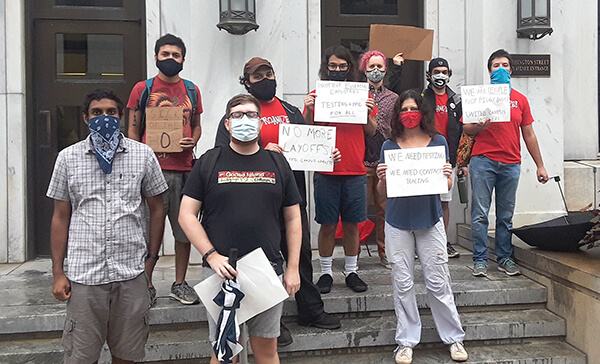 Members of the United Campus Workers of Georgia-CWA Local 3265 held a protest at the Board of Regents meeting in Atlanta to raise concerns about unsafe working conditions and staffing levels at public institutions of higher education across the state.

Alden Global Capital, the hedge fund known for pillaging newspapers, plans to expand its ownership stake in Tribune Publishing as soon as January 1, and is shifting its business strategy to focus on digital subscriptions, according to internal company documents obtained by DFMworkers.org. The news of Alden's planned expansion comes on the heels of a new Hedge Clippers report that details Alden’s long history of gutting newsrooms in communities across the country.

As the report makes clear, throughout the last decade, Alden and its president, Heath Freeman, have engaged in a sustained campaign of gutting newsrooms, cutting employment by more than 75%, while lining investors' pockets.

"Private equity's tenure in journalism has been disastrous," NewsGuild-CWA President Jon Schleuss said. "The obsessive focus on short-term profits has put countless journalists out of work and left millions of Americans without access to quality local news. We need a bold new vision for funding news organizations. We can't afford to wait any longer to revitalize local news."

The NewsGuild-CWA, as a part of its broader #SaveTheNews campaign for federal support of newsrooms, has proposed a slate of policy solutions that would allow newspapers to remain independent, help them survive the current economic downturn and enable them to provide quality news coverage in the future. Learn more here.

Calling all veterans! The AFL-CIO's Union Veterans Council is launching a membership drive to build the ranks of union members who can advocate for the issues facing veterans and all working people, including the need for good jobs, reliable health care, and a COVID-19 relief and recovery plan. The UVC plans to establish local chapters and Campaign Quick Reaction Teams to bring union veterans together to help elect pro-veteran, pro-labor candidates at the local, state, and national level.

If you're ready to get involved, click here to fill out the UVC Member Information Form.

If you’re interested in starting a chapter or putting together a group of volunteers for our Campaign Quick Reaction Force for Labor 2020 in your area, click here to fill out the Veteran Leaders Form. A member of the team will contact you directly and provide you with the tools and documents you need to get started.

Get Out the Vote for Joe Biden and Kamala Harris

The votes that we cast as union members will be crucial in ensuring we have pro-labor candidates elected at the local and state levels, all the way up to the White House.

We know Joe Biden is the clear choice to fight for union members. But this election will be close and we have to do all we can to make sure we defeat Trump in November!

Join hundreds of volunteers across the country to get out the vote for Joe Biden and Kamala Harris during CWA's National Nights of Action: Sept. 22, Oct. 6, Oct. 13, Oct. 20, and Oct 27. Join us wherever you are – we will send you information on how to connect online after you RSVP.

We'll kick off each phone bank via Zoom with a brief training and Q&A before making calls together.

You will receive information to connect via Zoom from 2020 Victory/Mobilize after you RSVP.

Covid Survivors for Change, a national group of families of COVID victims and survivors, will lead a National COVID-19 Remembrance on Sunday, October 4. They are calling for a national moment of silence at noon on that day, and will hold a safe and socially-distanced event on the Ellipse in Washington, D.C., to remember those lost to COVID-19, to honor frontline and essential workers, and to demand that elected officials do more to develop a national plan for safety and recovery. The event will include speakers and performances by artists and will be streamed online.

More than six months into the pandemic, over 6 million people in the United States have been diagnosed with COVID-19 and nearly 200,000 have died, including many CWA members, friends, and family members. If you have lost someone close to you or from your local to COVID, please share their name at https://nationalcovidremembrance.org/actions/wall-of-remembrance/ so that we can honor their memory as part of the Remembrance on October 4. 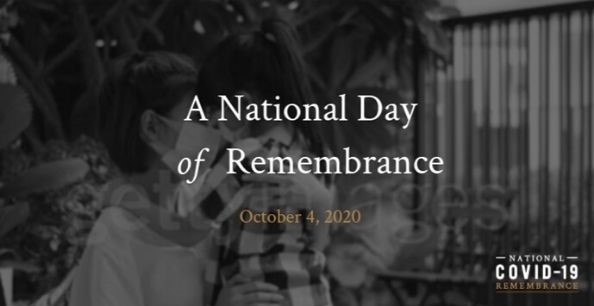