Jun 25, 2020 - UnionPlus Assistance for CWA Members During the COVID-19 Crisis

Clinical Engineering employees at Kaleida Health in Buffalo, N.Y., won their union representation election last week and will join CWA Local 1168. Workers stayed strong and public in their CWA support despite an anti-union campaign which included the unjust termination of a committee member on the Friday before the election.

These workers are enthusiastic that they are now standing shoulder to shoulder with 4,000 other CWA members at Kaleida Health. 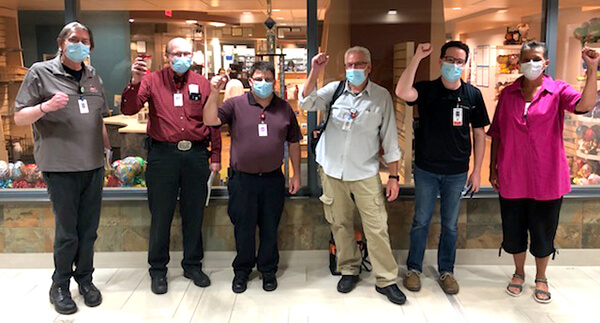 The workers’ victories followed a concerted effort by Gannett management to delay voting and subvert the union campaign. Gannett’s management took full advantage of the health crisis, repeatedly opposing mail-in voting for the two Florida groups and for the Delaware NewsGuild in filings before the NLRB while publicly denying that they objected to the process.

"Our newsrooms' all-but-unprecedented unanimous vote sends a tremendous message: that we are as united as can be, that we are intent on preserving our institution and its values, and that we will fight hard for security, equity, and transparency," the Palm Beach News Guild's organizing committee said after the vote count.

"Today's win has been a long time coming," the Southwest Florida News Guild's organizing committee said. "After many months of organizing and delays, we're looking forward to meeting Gannett at the bargaining table where we will continue to fight for better working conditions for our colleagues and for the future of local journalism in Southwest Florida."

Employees of the ACLU of Kansas announced Tuesday that they are forming a union and have filed for an election with the National Labor Relations Board. The ACLU has a long history of supporting workers' rights and democracy, the workers noted in a press statement, and they are "thrilled to bring these values into their own organization." The group will join the United Media Guild Local 36047 of The NewsGuild-CWA.

Staffers say their affiliation with the Guild will strengthen their work by giving them more democratic representation while they pursue civil rights for all.

New Jersey State Workers are voting on a Job Security Agreement negotiated with Governor Murphy that District 1 Vice President Dennis Trainor called "the best in the country." New Jersey is facing a $10 billion deficit, and 1 in 4 New Jersey workers have filed for unemployment. The State Worker COVID-19 Emergency Agreement provides a No Layoff Agreement for over 30,000 workers all of this year and all of next year in exchange for a delay of some across the board raises, and furloughs of workers during the time they can collect enhanced unemployment benefits under the CARES Act. 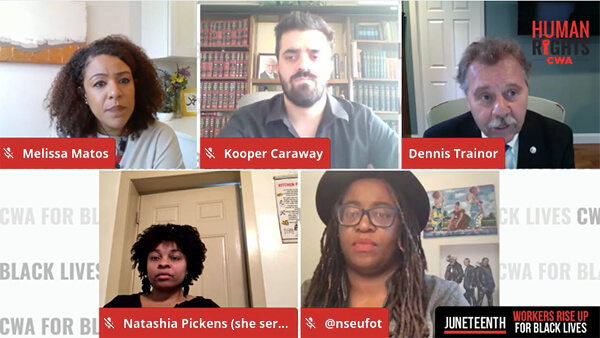 With more Americans relying on their communications services than ever during the pandemic, House Democrats introduced the Moving Forward Act, a new broadband infrastructure bill containing vital funding to expand broadband service.

CWA President Chris Shelton thanked the Members of Congress for introducing a bill that includes many provisions important to CWA members, including strong labor protections.

"Millions of families in the United States do not have access to affordable, reliable broadband internet connections – totally unacceptable before, but especially unacceptable during a pandemic when many are being asked to stay at home to bend the curve to save lives," said Shelton. "The House Democrats' broadband infrastructure bill introduced includes strong provisions to expand broadband access to rural communities and protect good union jobs across the country."

The bill is expected to come up for a vote next month.

UnionPlus Assistance for CWA Members During the COVID-19 Crisis

CWA Members who currently have a Union Plus Mortgage, Credit Card, Personal Loan, or Supplemental Insurance programs may be eligible for additional hardship assistance through the Mortgage Assistance Program and Union Plus Hardship Help. The Union Plus Mortgage Assistance Program provides interest-free loans and a $1000 grant to help eligible members make mortgage payments when disabled, unemployed, furloughed, locked out or on strike. Union Plus Credit Card holders are eligible for a $300 job loss grant if they have been laid-off or furloughed for 45 days or more due to COVID-19. The eligibility criteria and application process can be found at www.unionplus.org/hardship-help/union-plus-hardship-help-benefits.

The MetLife Legal program is making available additional resources including free consultation and document review and access to a self-help library so members can get questions answered and also review and complete Wills, Powers of Attorney, Healthcare Directives and similar documents for free through July 31, 2020. Additional info, including the instructions to reach the self-help document library, is available here: https://www.unionplus.org/blog/consumer-tips/free-legal-document-review-and-consultations-through-july-31-2020.

The Free College program is making available additional financial aid to students who may need additional assistance for education-related expenses due to COVID-19. Info on Free College is here: https://www.unionplusfreecollege.org/.