Despite the pandemic forcing many to work from home and rely more heavily on communications services, AT&T is cutting thousands of technician and clerical jobs across the country over the next few weeks and plans to permanently close more than 250 AT&T Mobility and Cricket Wireless stores.

Last month, AT&T CEO Randall Stephenson described the COVID-19 crisis as "a time of war," during an interview on CNN. Stephenson went on to say, "Everybody needs to step up and do their part, in terms of how we help the general population and the general public."

"If we are in a war to keep our economy going during this crisis, why is AT&T dismissing the troops?" said CWA President Chris Shelton. "AT&T could help lead the country toward recovery by partnering with its workforce to build next generation networks. Instead the company is adding to the pain of the recession already underway."

AT&T executives have made it clear through their public statements that they are using the COVID-19 pandemic as an excuse to add to their already devastating job cuts. An AT&T spokesperson told the Dallas Morning News that, "With more customers shopping online, we are closing some retail stores to reflect our customers' shopping practices. While these plans are not new, they have been accelerated by the COVID-19 pandemic."

Turning its back on its workers and customers after pledging to step up during the recovery is another broken promise from AT&T. Outgoing AT&T CEO Randall Stephenson pledged to use President Trump's corporate tax cuts to create jobs, raise wages, and invest in infrastructure. Instead, a review of AT&T's quarterly reports shows that the company has cut more than 41,000 jobs, not even including the planned cuts announced this week.

"I want to know where these jobs are going," said Joe Snyder, President of CWA Local 4302 in Akron, Ohio, who has been an AT&T technician for 25 years. "From where we sit, it looks like AT&T is pushing the work to low-paid contractors who do not have the same training, experience, and commitment as CWA members. The money they are saving goes into the pockets of wealthy shareholders looking for short-term profits instead of staying here in our communities."

This week, the Supreme Court ruled 6-3 that firing someone based on their sexual orientation or gender identity is a violation of Title VII of the Civil Rights Act of 1964. This ruling provides clarity and comfort for millions of LGBTQ working people in the United States who are not covered by anti-discrimination provisions in state and local laws or union collective bargaining agreements.

"For too long, LGBTQ working people have risked losing their jobs if they didn't conform to their employer's gender stereotypes," said CWA President Chris Shelton. "Today's Supreme Court decision finally recognizes that discrimination against LGBTQ people at work is just plain wrong. We at CWA celebrate this milestone and commit to continuing the fight for justice for all working people."

Thanks to testimony from CWA members, including nine new Denver Health Workers United members, the Colorado legislature passed a bill barring employers from taking disciplinary action against employees who report workplace safety issues during a public health crisis. The whistleblower bill will now head to Gov. Jared Polis for a signature. During the process, the CWA members spoke up about unsafe working conditions including having to reuse facemasks and other PPE.

"As a member of Denver Health Workers United, we made this bill happen," said Rosalina Roacho Delgado Robles. "I'm so happy to be a part of this union where we make a difference in ensuring health and safety for all."

"I testified because DHWU empowered me to speak out for the health and safety of the community," said Christine García Rexach. "I'm pleased our concerns were heard and validated with the bill." 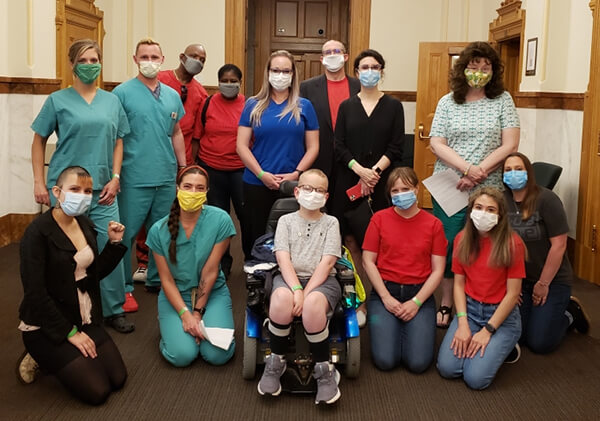 Dan Mauer, Director of Government Affairs for CWA, has been appointed to the Independent Mexico Labor Expert Board to monitor Mexico's implementation of the labor standards established in the United States-Mexico-Canada Agreement (USMCA).

"I'm excited to have the opportunity to represent the views of CWA members on the Independent Mexico Labor Expert Board," said Mauer. "We fought hard to improve the labor enforcement provisions in Trump's new NAFTA deal, but the reality is those provisions aren't strong enough on their own to meaningfully protect workers' rights, raise standards, and prevent a race to the bottom in wages and working conditions in call centers and other workplaces."

CWAers Call for Just Cause Protections for Essential Workers 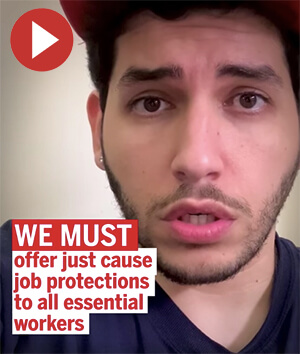 In a new ad, CWAers are calling for the New York City Council to pass the Essential Workers Bill of Rights, which includes just cause job protections for all essential workers in New York City, including those who work in wireless retail stores. The bill would protect essential workers in New York City – who are mostly people of color – against unjust termination and safeguard whistleblowers who call out dangerous and hazardous working conditions during COVID-19.

Read more about the bill here.

As the COVID-19 public health crisis persists, state and local government budgets are beginning to be squeezed because of lost revenues. This threat to our social safety net also threatens CWA's public service members, whose jobs are on the line as politicians look for places to cut. CWA members are mobilizing to defend the public sector, their jobs, and the services they provide by calling on the U.S. Senate to pass the HEROES Act.

The HEROES Act is being held up by members of the Republican majority in the Senate, who are refusing to take action on the bill, which would provide over a trillion dollars in critical aid to state and local governments, and address other urgent needs like premium pay for essential workers, extending unemployment, scaling up testing and tracing, defending elections, and more. From New York to New Mexico, members have made thousands of calls to union members and supporters to get them to call their Senators to urge support for the HEROES Act.

"We've got to make these Senators in Washington D.C. hear the message loud and clear: the crisis will only get worse if they don't act," said Josh Smyser, a member of CWA Local 3865 who participated in the phone banking. "Enough with the typical BS, we need action."

During the Great Recession, insufficient and delayed support for state and local governments prolonged the economic crisis. Unable to borrow, the public sector faces the prospect of having to make deep cuts – as much as half a trillion by 2022 – which threatens the country's ability to recover.

"Not only are our jobs on the line, but so are the critical services our communities rely on," said Smyser." Saving our public sector helps all of us."

Join Us for a Juneteenth Celebration: Workers Rise Up for Black Lives

Join us tomorrow, Friday, June 19th, for a virtual Juneteenth event featuring poetry, music and a panel discussion on Building a Workers' Movement that Takes on Racism. The event will stream live on Facebook at 6 pm EDT/ 5 pm CDT/4 pm MDT/3 pm PDT.

Juneteenth is an annual celebration commemorating the end of slavery in the United States. CWA's virtual celebration will include union leaders, artists, and activists in the movement for racial justice. 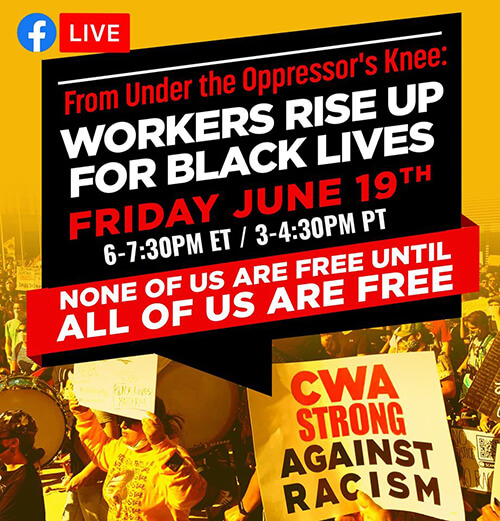 CWA members at app developer Glitch successfully negotiated with the company to give all employees June 19 – Juneteenth – off as a paid holiday, exchanging it for Presidents Day. The holiday commemorates the freeing of more than 250,000 enslaved African Americans by Union troops in 1865.

"Juneteenth has for too long failed to be given the recognition it deserves by non-Black Americans," said Glitch bargaining committee member Sheridan Kates. "We're grateful to now have this day officially marked as a holiday at Glitch, to not only celebrate it, but to also give us time to reflect on the ongoing impact of white supremacy – such as the violence we're seeing every day in America, with police being 2.5 times more likely to kill a Black person than a white person. It's a small step in our fight towards true racial justice in America."

This week we honor the memory of Brenda Jones, a member of CWA Local 1037 who worked for the State of New Jersey Motor Vehicle Commission in East Orange.

While social distancing directives have reduced COVID-19 infections and hospitalizations in many areas, several states are reporting spikes and record numbers of cases.

All CWA members should continue to practice appropriate protocols for avoiding infection. If you are at high risk for exposure at work, your employer should be providing appropriate Personal Protective Equipment. For those who are not at high risk and for guidance when you are off the job, make sure to review our tips for non-medical/community face masks at https://cwa-union.org/non-medical-face-masks.

If you have concerns about COVID-19 protocols in your workplace, contact your shop steward or a local officer.

If you have been exposed to COVID-19 or are experiencing symptoms consistent with infection, contact your healthcare provider immediately and follow reporting procedures established by your employer. Also notify your CWA Local or District as soon as possible.