Citing concerns ranging from workplace protections to executive pay, a committee of dozens of nurses, CNAs, and other bedside care workers at Denver Health announced this week that they are forming a new union for the hospital's employees. Denver Health Workers United, an affiliate of CWA, will organize members from all job categories in the hospital and advocate for workers' rights, institutional change, and meaningful public investment to improve patient health outcomes.

"I started at DH as a volunteer and have spent my entire nursing career here. I'm joining the union because the COVID crisis has brought to light several issues that have existed for frontline staff and we need to do something about it," explained one nurse and leader with DHWU. "With a united voice we can advocate for ourselves and therein provide better care for our patients."

The announcement follows troubling revelations about soaring executive compensation and bonuses as nurses and other staff are asked to bear cuts in the midst of the COVID-19 crisis. Nurses and other critical members of the more than 7,000 staff were asked to take leave without pay and cut hours, while a handful of executives raked in bonuses. Meanwhile, some staff report not receiving appropriate protective equipment; in some alarming cases, staff have been allotted just one mask for an entire week.

"We have a vision of a democratic workplace that promotes dignity and equality for all Denver Health workers, from nurses to CNAs," one nurse shared. "We know that safer workplace conditions, and an environment where staff feel protected reporting concerns translate to better patient outcomes."

Newsroom staff at Gannett-owned papers in Florida and Delaware have faced resistance from the company since they decided to form unions at their workplaces. The company has refused to voluntarily recognize the unions – the Palm Beach News Guild, the Southwest Florida News Guild, and the Delaware News Guild – and the COVID-19 pandemic has postponed their representation elections.

Union representation is particularly critical right now, as workers face issues related to the pandemic including furloughs and the need for support to allow them to work from home or in the field.

Sign the NewsGuild-CWA's petition to tell Gannett leadership why they must support journalists' voices in the newsroom: https://actionnetwork.org/letters/tell-gannett-to-protect-its-local-journalists.

Workers Take Action Around May Day

The week of May Day, workers across the country participated in socially-distanced workplace and at-home actions to put pressure on employers to implement adequate safety protections and to make sure skilled essential workers are able to use their skills to keep Americans safe during the COVID-19 crisis.

On May 5, coinciding with the company's virtual shareholder meeting, IUE-CWA members held socially distant protests at General Electric (GE) facilities across the country, holding signs that read "Stand Up for Dallas," "We Can Make Ventilators," and "GE: Keep Us Safe." GE recently announced their intent to permanently close their Dallas facility, which will leave over 40 workers jobless.

"Our members are ready to step up with an answer to our country's ventilator production needs. The answer is right here at GE. We're asking President Trump and GE's Board to tell management to stop shipping our jobs overseas and to build more ventilators for sale here and throughout the world by bringing this work to unused space in existing U.S. GE facilities," said IUE-CWA President Carl Kennebrew. 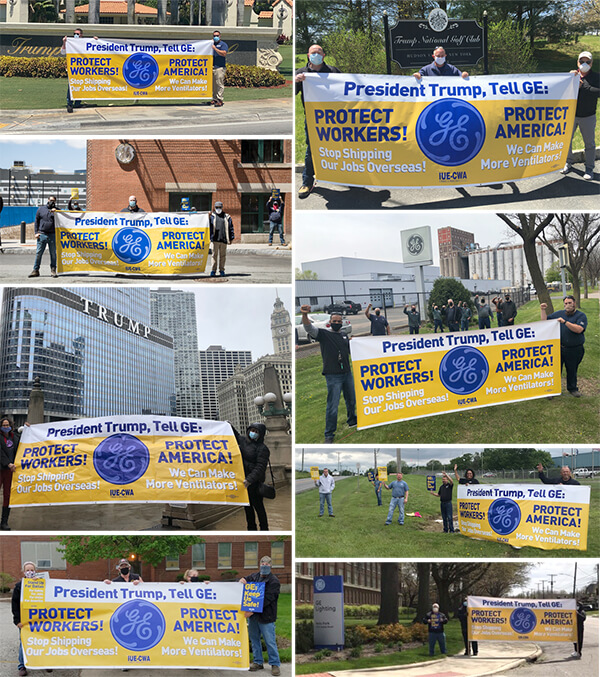 On May 5, coinciding with the company's virtual shareholder meeting, IUE-CWA members held socially distant protests at General Electric (GE) facilities across the country.

Maximus call center workers across the country held socially distanced protests calling for the company to meet a set of demands they have put forward laying out their safety concerns and for CEO Bruce Caswell to meet virtually with the CWA organizing committee to work with employees to implement safety guidelines and to ensure workers are able to fairly access leave options that are available.

"With these critical health and safety concerns, it's more important than ever that workers have a voice at Maximus – and that the company have an open dialogue with workers," said CWA President Chris Shelton. "The lack of communication from the company's leadership puts people at unnecessary risk. Maximus needs to meet with the workers' organizing committee to discuss policies that will keep workers, their families, and their communities safe."

Check out the Hattiesburg American's photos from one of the protests here.

Ahead of Missouri's planned reopening on Monday, labor advocates said that the state and Gov. Mike Parson are not doing enough to protect workers and families.

Union leaders, members of the Missouri House of Representatives, a state senator, and other labor and economic justice advocates called upon Parson on Thursday morning to provide financial assistance to state workers for transitioning to telework, and to provide state workers with what they deemed to be more adequate personal protective equipment, or PPE.

"What we've outlined is the compromise," said Natashia Pickens, president of CWA Local 6355 in a story in the Jefferson City News-Tribune. “Nothing less than PPE for everyone.”

The United Campus Workers-CWA released a report on working conditions for adjunct faculty at East Tennessee State University (ETSU) revealing a crisis for these employees.

More than 550 adjunct faculty teach at ETSU, accounting for between 40-50% of total instructional faculty and teaching 30% of all undergraduate credit hours. This report sheds light on the precarious experience of the workers that teach our students: low-pay, no access to healthcare, lack of retirement, hours of unpaid work, a lack of voice or respect at work, and few professional benefits, despite rising tuition costs and student debt.

Poor working conditions for adjuncts are being compounded by the COVID-19 crisis, which is expected to hit public higher education budgets hard.

"I don't have insurance," said Zach James, an adjunct in Literature and Languages, "I've been gambling (on my health) for 7 years now."

"Last semester, a week before class, after I had already prepped a class, they cancelled it at the last minute. I did all that work for no pay," said Kittye Hirsch, an adjunct in Sociology.

United Campus Workers is calling on Tennessee's universities to give students what they deserve and treat adjunct faculty like the mission-critical employees that they are.

CWA and Other Unions Call for Electronic Union Representation Elections

CWA, the AFL-CIO, AFSCME, AFT, IAMAW, IBT, IFPTE, IUOE, NEA, SEIU, TWU, UAW, and USW sent a letter on Wednesday to House and Senate leadership strongly urging them to include funding for the National Labor Relations Board to develop a system and procedures for conducting union representation elections electronically. In late April, 168 members of Congress led by Reps. Andy Levin (D-Mich.) and Brian Fitzpatrick (R-Penn.) called for the same goal, showing broad bipartisan support in Congress.

The COVID-19 pandemic has reinforced the need for updated procedures as employers use the crisis as an excuse to delay representation elections. Read more about how journalists seeking to join the NewsGuild-CWA have been facing stall tactics from the media company Gannett during the pandemic here: https://www.cnn.com/2020/04/30/media/gannett-newspaper-unions/index.html.

We continue to update our COVID-19 resource page with new resources to address common questions and concerns that CWA members have as the pandemic continues to affect every aspect of our lives.

Materials include recommended health and safety protocols for workers and information about benefits available as the result of recently passed federal legislation to address the crisis.

Your local leadership will have the most up-to-date information on policies in place at your work location to address the COVID-19 pandemic and what action you should take if you believe you are being asked to work under unsafe conditions.

Remember, if you have been exposed to COVID-19 or are experiencing symptoms consistent with infection, contact your healthcare provider immediately and follow reporting procedures established by your employer. Also notify your CWA Local or District as soon as possible.