As the novel coronavirus (COVID-19) continues to affect communities across the globe, CWA leaders are engaging with employers to ensure that they are providing CWA members with comprehensive safety and prevention measures in an environment that encourages open and free communication without fear of reprisal or negative impacts on pay or continued employment. 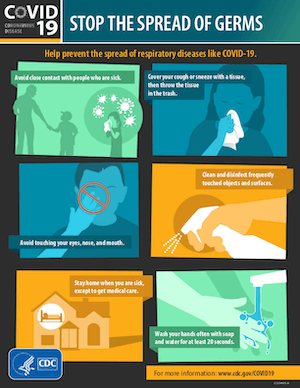 CWA's Health and Safety department has established a process for locals to report on what protections employers have put in place as well as for members to report any incidents of exposure or infection. If you have been exposed to COVID-19 or are experiencing symptoms consistent with infection, contact your healthcare provider immediately and follow reporting procedures established by your employer. Also notify your CWA Local or District as soon as possible.

Local health and safety committees are also sharing information with members on protocols for avoiding infection at their workplaces.

These resources provide more information on how to protect yourself from coronavirus infection, what to do if you are sick, and how to address the risk of infection in your workplace:

The financial services industry, which is plagued by systemic problems of discrimination, low wages, extreme sales goals, and whistleblower retaliation, has the country's lowest percentage of union representation. While union membership in the financial sector is the norm in other countries, with over 3 million bank workers who have union representation globally, in the United States almost no bank workers are represented by a union. No private bank employees have successfully formed a union in over 40 years.

"After nearly two decades at big banks, I was proud to join Beneficial State Bank because of its commitment to invest in its communities," said Desiree Jackson, an Assistant Vice President in Oakland, Calif., and member of the Committee for Better Banks, a CWA project to demand better labor standards and consumer protections in the banking industry. "With this historic move to form a union, we're seeing that commitment to community in action – and I'm proud to be a part of it. All workers should have a voice on the job to advocate for themselves, their colleagues, and their customers. It's the right, and fair, thing to do."

The staff of Delaware Online and Delaware News Journal said Monday they are forming a unit of the NewsGuild-CWA to preserve the quality of their coverage and to fight for the future of their newsroom. Nearly 70 percent of newsroom staff completed union authorization cards indicating support for the Delaware News Guild.

"The News Journal, like many other newspapers, has endured countless rounds of layoffs and cuts," organizers wrote in a press statement. "This, combined with growing health care costs, stagnant salaries, and constant staff turnover makes it difficult to maintain the high caliber of journalism that we strive for – and that Delawareans deserve," they said.

The staff of Delaware Online and Delaware News Journal are forming a unit of the NewsGuild-CWA to preserve the quality of their coverage and to fight for the future of their newsroom.

The journalists of the Idaho Statesman announced plans to form a unit of the NewsGuild-CWA on March 2, becoming the first employees of a McClatchy-owned publication to seek union rights since the company filed for bankruptcy. All of the Statesman's 16 eligible newsroom employees signed a mission statement signaling support for the Idaho News Guild.

In forming the union, the Statesman's journalists are seeking to preserve Idaho news, ensure their ability to tell the community's stories, and give staff input in decisions. Organizers plan to advocate for a more stable newsroom, pay equity, improved healthcare benefits, and compensation that rewards experience.

Reporter Ruth Brown, who has been at the Statesman for three years, said, "Our newsroom works every day to deliver news that is vital to our community, and I'm proud to be a part of it. Forming a union is the best way to strengthen our newsroom by giving our journalists a voice."

CWAers from Alabama and Georgia joined the Poor People's Campaign: A National Call for Moral Revival – We Must Do M.O.R.E. Tour in Alabama to fight against inequality last weekend. Members marched across the Edmund Pettus Bridge to commemorate Selma's Bloody Sunday March, a 1965 protest during which hundreds of nonviolent participants were confronted and brutally attacked for fighting for the right to vote. The Bloody Sunday March commemoration was especially powerful for CWA members as they work to fight against strict voter ID requirements and voter suppression legislation aimed to silence the voices of minority communities.

Mass meetings in Mobile and Birmingham brought faith leaders, advocates, and labor activists together to organize, strategize, and build power to fight back against systems that support economic injustice.

The Poor People's Campaign: A National Call for Moral Revival - We Must Do M.O.R.E. Tour will meet in Washington, D.C., on June 20, 2020, for a national assembly of over 40 states and thousands of moral activists and advocates. Find a Poor People's Campaign chapter in your state to join the fight. Contact the CWA Human Rights Department (ahubbard@cwa-union.org) for more information! 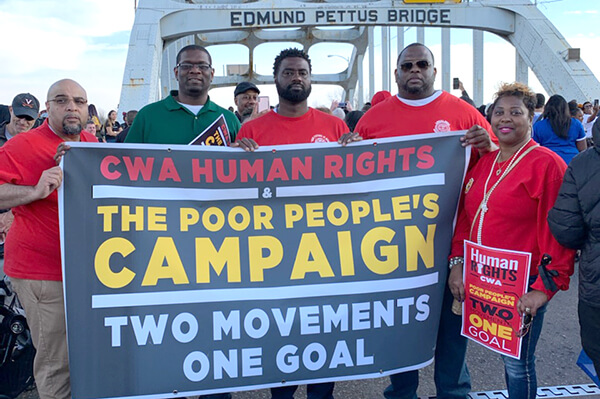 Above: CWAers from Alabama and Georgia joined the Poor People's Campaign: A National Call for Moral Revival - We Must Do M.O.R.E. Tour in Alabama.

Below: Members of CWA Local 3204 in Atlanta sent a bus full of CWA members down to Selma to fight against inequality.

On Tuesday, CWA-endorsed candidates won big across the country!

In North Carolina, Cal Cunningham won the U.S Senate primary to take on incumbent Republican Senator Thom Tillis in the fall. CWA members from Locals 3611 and 3682 text-banked and phonebanked to get out the vote for Cunningham.

The stakes for the North Carolina Senate election are high for CWAers. In February, members tried to deliver postcards to Tillis' office asking him to support the PRO Act but his staff wouldn't even open the door.

"For far too long, North Carolina working families have neither been heard nor represented by our U.S. Senators," said Grant Welch of CWA Local 3611. "Cal Cunningham is going to change all that. He is listening to all, not a select few. With Cal's leadership, working families will have a voice in the Senate."

In Texas, where CWA members fought hard to try to take out anti-worker incumbent Henry Cuellar in the 28th Congressional District, Jessica Cisneros just fell short with 48% of the vote. Cuellar, who has a long record of siding against workers and voted against the PRO Act, was carried over the finish line by massive spending from corporate special interest groups, including Charles Koch's Super PAC – the first time that group has ever supported a Democrat.

CWA members from Locals 3611 and 3682 text-banked and phonebanked to get out the vote for Cal Cunningham.

This week, CWA joined a coalition of major labor unions representing a combined 5.3 million workers to file a petition calling on the Federal Trade Commission to open an investigation into anti-competitive behavior by Amazon. The petition is available at InvestigateAMZ.org.

"American families and businesses have become dependent on infrastructure that Amazon controls," said CWA President Chris Shelton. "It goes way beyond buying and selling merchandise. Look under the hood of the software that powers supply chain management, government services, banking, utilities, healthcare, and hundreds of other industries and you will find Amazon Web Services. Regulators are behind the curve with this company, and an FTC investigation will shed needed light on the scope and impact of Amazon's anti-competitive behavior on workers and consumers."

The U.S. Senate Must Act Now to Save Our Democracy 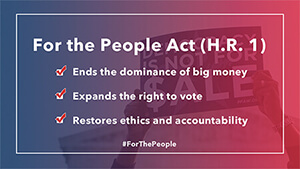 A year ago, the U.S. House passed the For the People Act, sponsored by Representative John Sarbanes (D-Md.). The sweeping pro-democracy bill contains reforms essential to fixing our political system, including making it easier to vote, ending the power of big money in politics, and ensuring that public officials work for the public interest.

Unfortunately, one year later, Senate Republicans, led by Mitch McConnell, have sided with the corporate lobbyists and blocked the For the People Act and other anti-corruption bills that the U.S. House has passed to restore the balance of power in our political system.