At the CWA District 9 Conference this week, CWA President Chris Shelton told attendees that with Donald Trump, Republicans, and corporations banding together to gut workers' rights at a frightening pace, union members must do everything they can to beat Trump in November.

"We need to make sure our members know about every single thing Trump has done to make working people's lives worse since he was elected," said Shelton. "Trump's Labor Secretary Eugene Scalia aggressively defended Cablevision's union-busting, including firing workers for union activity when they tried to win a contract with CWA. At OSHA, there are fewer inspectors than at any time in history and workplace fatalities are rising as a result."

"Keep speaking up, and keep paying attention," said CWA Secretary-Treasurer Sara Steffens who also addressed the conference. "As November nears, it will become more and more clear who supports working people of this country, and who does not."

"Society is shifting. More and more, our communities are realizing that having a voice at work makes a difference in their daily lives. We must be the example. We will be the example," said CWA District 9 Vice President Frank Arce.

CWAers at the conference also protested in front of a Frontier office in Long Beach to call on new Frontier CEO Bernie Han to meet with President Shelton and make sure workers have a seat at the table as Frontier makes decisions about the company's future. 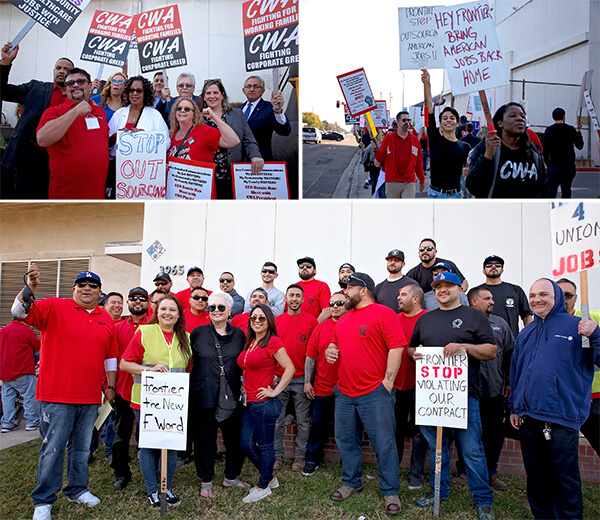 CWAers at the District 9 conference protested in front of a Frontier office in Long Beach, Calif., to call on new Frontier CEO Bernie Han to meet with President Shelton.

Journalists at The Palm Beach Post and The Palm Beach Daily News announced Tuesday that they are forming a union with NewsGuild-CWA, adding to the surge of organizing among news industry employees. In a letter to management, they requested voluntary recognition of their newly formed unit of NewsGuild-CWA from the newspapers' parent company, Gannett.

In a mission statement delivered Tuesday to the papers' interim publisher, newsroom representatives asked Gannett to recognize the Palm Beach News Guild to "preserve our role as a resource in our community, a voice for the voiceless and a watchdog that holds the powerful accountable."

Last week, the journalists of the Wyoming Tribune Eagle announced that they are joining NewsGuild-CWA. By forming a union, they hope to "protect our newspaper's legacy as an essential public trust," the union organizing committee said. The publication is owned by the Adams Publishing Group.

"Cheyenne deserves a newspaper that can properly capture both its struggles and joys, yet the economic realities of journalism have, at times, limited our ability to produce stories that reflect those complexities," they wrote. "Despite those realities, we've continued to cover school board meetings, demand answers from public officials and highlight those unsung people and places that are so vital to our community."

"We look forward to partnering with PRA management to create an engaged vision and to negotiating a fair collective bargaining agreement," staff members said in a statement.

This week, CWA members at AT&T Southwest Mobility voted to authorize a strike, with a vote supported by 98% of workers. Their contract with AT&T, covering more than 8,000 workers in Texas, Missouri, Oklahoma, Kansas, and Arkansas, is set to expire on Friday.

"AT&T Mobility workers in the Southwest are not afraid to do whatever it takes to make sure that the company invests in its employees so that we can build and support the next generation networks that our communities need," said Jason Vellmer, a CWA Staff Representative who is leading the bargaining team. "We have made progress toward a fair contract over the last few days, but several critical issues remain unresolved. This strike authorization vote lets AT&T know that the bargaining team has the full support of our members as we work toward a new contract that protects our healthcare, improves wages, and keeps family-supporting, union jobs in the region." 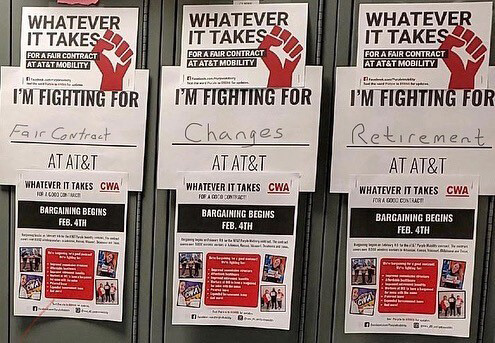 CWA Holds Members of Congress Accountable on the PRO Act

On Valentine's Day, CWA members across the country held protests to call out Members of Congress who voted against the PRO Act, and to show them that working people have no love for elected officials who don't support working people. 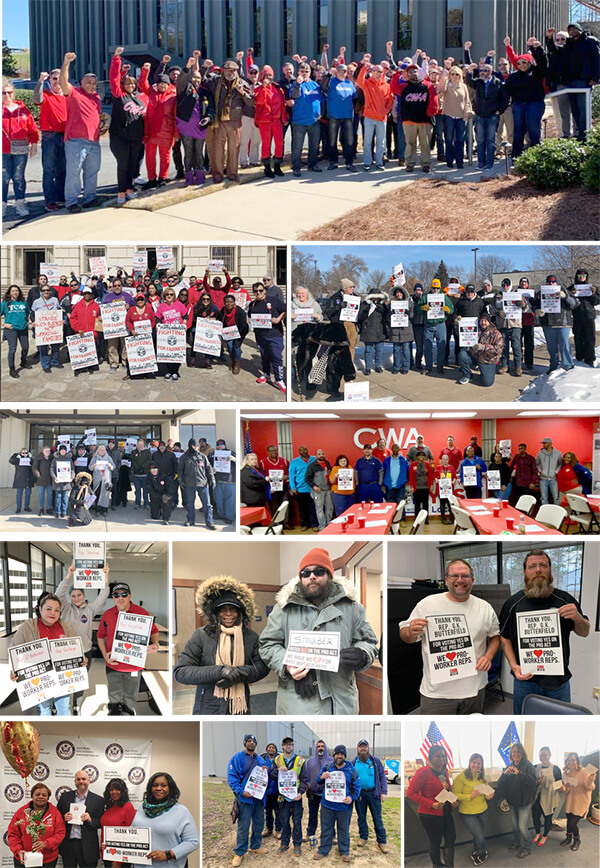 The PRO Act is historic legislation that would make it easier for workers to join a union, crack down on companies that violate our rights to organize, protect strikes and other protest activities, make it easier to bargain union contracts, and prevent the misclassification of workers as independent contractors.

CWA members also held actions to thank the many Members of Congress who did vote for the PRO Act, which passed in the House of Representatives on February 6. Republican Senate Majority Leader Mitch McConnell has not moved the bill forward in the Senate and President Trump has pledged to veto it.

We were able to win the PRO Act vote because CWA members helped elect a pro-worker majority in the House in 2018. Because we must continue to build on that success, the CWA Executive Board has declared that no member of Congress – Democrat or Republican – will receive CWA's endorsement for reelection unless they support the PRO Act.

To reinforce that commitment, CWA President Chris Shelton sent a letter to Democratic Congressional Campaign Committee (DCCC) Chair Cheri Bustos this week to urge the Committee to cease providing campaign support to the seven Democratic House Members who voted against the PRO Act.

"The PRO Act is a continuation of the long history of the Democratic Party's policies to strengthen workers' voices in the U.S. economy and create a level playing field and an engine for millions of workers to reach the middle class and, therefore, a stable and comfortable life," wrote Shelton. "Those who voted against the PRO Act have betrayed this fundamental principle of the Democratic Party. And due to those votes, it is impossible for CWA to urge our members to support any of these seven candidates. They must be denied the support of the Democratic Party for refusing to stand with working Americans." 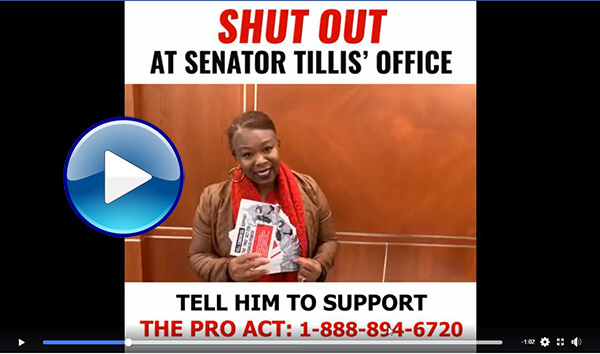 CWA members in North Carolina attempted to deliver postcards in support of the PRO Act to Republican Senator Tom Tillis, but the staff wouldn't even open the door for them.

The call was full of important information that every CWAer at Frontier should know. You can listen to the recording of the call at https://soundcloud.com/cwaunion/cwa-national-frontier-communications-call-february-13-2020.

"I've reached out to the new CEO Bernie Han to meet and talk about how we can work together to build the company," said President Shelton. "We can work with Frontier to push back on the hedge funds that want to keep Frontier loaded up with debt and unable to invest. We can work together to improve operations so customers are getting timely service and the company can bring in new business. Bernie showed no interest in engaging with us on any issues that are important to our members. He's looking to shut us out until all the decisions have been made." Shelton urged everyone on the call to leave messages with their supervisors requesting the new CEO meet with the union.

"It's critical that Frontier members in California and across the country stand up and take action now. Frontier retirees also need to be engaged in this fight as well. The company can make decisions that impact retirement benefits in bankruptcy. This is an all hands on deck situation," said Arce. CWA's contract with Frontier in California expires later this year.

As state regulators in several states investigate service quality issues at Frontier, CWAers have been calling on the company to invest in its network and workforce to improve service quality in Ohio and Minnesota.

See answers to frequently asked questions about the possible bankruptcy at cwa-union.org/news/faq-on-possible-frontier-bankruptcy.