At the CWA Telecommunications and Technologies (T&T) conference in Orlando, CWA President Chris Shelton told attendees that passing the Protecting the Right to Organize (PRO) Act must be union members' top priority as Democrats plan to vote on the bill next week.

"We will not endorse anyone who won't support this reform," said Shelton. "In Florida, CWA Local 3108 rallied to demand their Congresswoman Stephanie Murphy sign on to the PRO Act – and they'll keep at it until she's sponsoring the bill. Thanks to this work, the House of Representatives is expected to take a vote on the bill next week. We need everybody to call their member of Congress and demand a vote on the PRO Act. I want those phones on Capitol Hill ringing off the hook!" 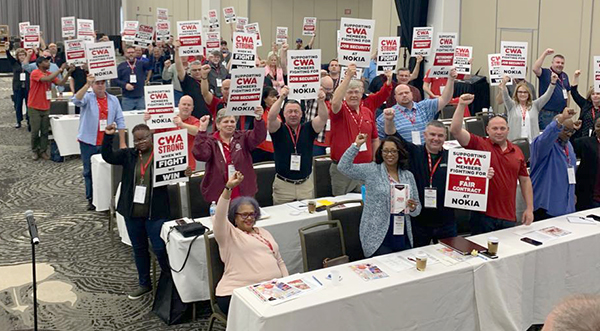 At the conference, 200 delegates and CWA leaders showed their solidarity with Nokia workers.

At the conference, 200 delegates and CWA leaders showed their solidarity with Nokia workers who are fighting to secure a fair contract that provides for job and retirement security. Cecil Roberts, President of UMWA and guest speaker at the conference, pledged his support for the workers' fight.

The uphill battle with Nokia is just another example of why we need labor law reform like the Pro Act. Nokia's plan to eliminate the entire bargaining unit and replace it with contractors – while at the same time securing millions of taxpayers' money on federal contracts for 5G deployment – is a slap in the face to hard working men and women at Nokia.

Bargaining with Nokia is set to resume on February 11.

It's Time for a Clean Slate for Worker Power

More than 70 labor leaders, scholars, and activists, including CWA's Special Counsel Jennifer Abruzzo, contributed to a new report released last Thursday by Harvard Law School's Labor and Worklife program called "Clean Slate for Worker Power." The report lays out a vision for a massive overhaul of U.S. labor law to put power in the hands of workers and make it much easier for any worker to join a union.

A MAXIMUS customer service representative, Shaena Goodman-Robinson, who is organizing with her coworkers to join CWA, shared her story of how difficult it is to organize under current labor law.

"The company had an anti-union consultant come in to try to persuade all the CSRs not to join the union. It was a captive audience speech – we had to be there," Goodman-Robinson said. "I don't like feeling disenfranchised. I'm here, giving this company my time, and I want them to treat and pay me fairly."

Read more about the report here.

Get Ready to Flood Congress with Phone Calls about the PRO Act on February 4!

February 4 is a national day of action on the Protecting the Right to Organize (PRO) Act. The House of Representatives is expected to vote on the historic bill next week. The PRO Act will help build and grow worker power by making it easier for workers to form unions, protecting strikers, helping workers win their first union contracts, and a lot more.

Too many members of Congress are afraid to support the bill because that means they'd lose campaign contributions from CEOs and big corporations. But we're not going to let the bosses win!

We need to flood Congress with phone calls on February 4! Join CWA's Rapid Response text list to get information on how to participate on the 4th. Click here to sign up or text CWAAction to 69888.

AT&T Continues to Break Its Promises to Workers and Customers

AT&T has cut over 37,000 jobs since the Tax Cut and Jobs Act went into effect two years ago. In its quarterly earnings report earlier this week, the company reported record operating and free cash flow and has announced more than $5 billion in stock buybacks.

Although President Trump, Republican congressional leaders, and AT&T CEO Randall Stephenson pledged that the tax bill would lead to more jobs, higher wages, and greater investment, those benefits have not materialized. Instead, corporations have used their tax windfall to finance stock buybacks which benefit wealthy investors and corporate executives.

AT&T has continued to cater to the demands of controversial vulture hedge fund Elliott Management, which purchased a stake in AT&T in September 2019. Elliott is pushing AT&T to extract profits from the company by eliminating jobs, outsourcing work, and divesting critical assets. In early October, AT&T announced that it would sell off its Puerto Rico and U.S. Virgin Island Mobility units to Liberty Latin America (LLA), putting at risk the deployment of FirstNet and nearly 900 union jobs.

"The list of communities being destroyed all across America continues to grow with the elimination of jobs at AT&T, despite promises of job creation from company executives," said CWA President Chris Shelton. "To make matters worse, AT&T is using its profits to enrich wealthy shareholders instead of investing in building the next generation networks that Americans, especially in rural and underserved areas, so desperately need. CWA members and our allies will keep fighting until the company stops eliminating jobs so that they can provide the high-quality service that customers deserve."

Jon Schleuss Sworn in to CWA Executive Board 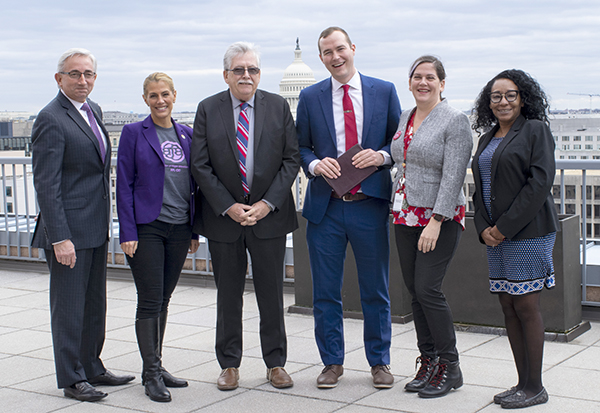 Earlier this month, Jon Schleuss was sworn in as a member of CWA's Executive Board. Schleuss won the election as president of the NewsGuild-CWA in December. Prior to taking office Schleuss worked as a Los Angeles Times data and graphics journalist and college instructor. In late 2016, Schleuss and a colleague launched the organizing campaign that resulted in an overwhelming victory for the NewsGuild at The Times, whose newsroom had never been unionized.
(Pictured, from left: Charles Braico, NABET-CWA Sector President; Sara Nelson, AFA-CWA Sector President; Christopher M. Shelton, CWA President; Schleuss; Sara Steffens, CWA Secretary-Treasurer; Margaret Cook, CWA Public Workers Vice President)

The workers of OPAL Environmental Justice Oregon, a nonprofit that is building power for environmental justice and civil rights in local communities, have won voluntary recognition to join CWA Local 7901.

Read more about the OPAL workers' victory here and watch the video of their "on the spot" recognition here. 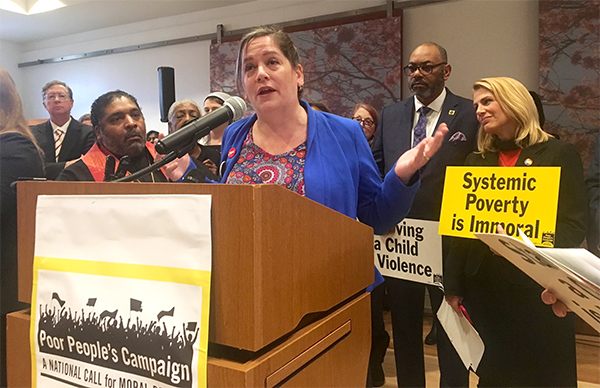 CWA Secretary-Treasurer Sara Steffens (center) and AFA-CWA President Sara Nelson (right) spoke at a Poor People's Campaign press conference this week in Washington, D.C., expressing their commitment to fighting back against the structures that are undermining our democracy and supporting economic injustice.

"The corporate CEOs and their Wall Street enablers, there's never enough for them. That's what we're up against every day in our unions," said Steffens.

"A lot of people like to say it's the rich and powerful...they're just rich. They just have resources. We have power. Solidarity is a force stronger than gravity," said Nelson.

The Poor People's Campaign is planning a Moral March on Washington for June 20, 2020. For more information visit https://www.poorpeoplescampaign.org/june2020/.