After 15 months of bargaining, NewsGuild-CWA members at the Los Angeles Times reached a tentative agreement with management on a groundbreaking first contract covering nearly 500 journalists.

The new agreement establishes pay minimums and step raises based on industry experience. Raises will average more than $11,000 per person.

"This is what we fought for," said Carolina A. Miranda, co-chair of the L.A. Times Guild. 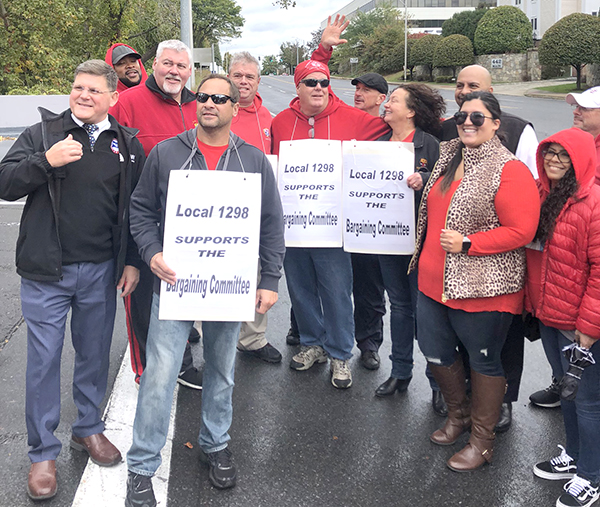 As the CWA Local 1298 bargaining committee continues efforts to reach an agreement with Frontier in Connecticut, the union and the company have mutually agreed to extend the current contract through 11:59 p.m. on October 19. Workers rallied at Frontier headquarters today to show that they are united in their fight for a fair contract.

Billionaire Paul Singer's hedge fund Elliott Management has bought shares of AT&T and launched a campaign arguing for the company to cut costs by laying off workers, divesting assets, and extracting cash to enrich shareholders. This predatory attempt to pump up AT&T's stock price would hollow out the company and put CWA members' jobs at risk.

New CWA research released this week estimates that more than 30,000 family-supporting jobs will be at risk of elimination or a reduction in wages and benefits if AT&T's leadership adopts these proposals. CWA opposes Elliott Management's agenda at AT&T and its members are ready to challenge Elliott's attempt to destroy jobs and communities for short-term gain.

"Elliott Management's short-sighted activism has left families without jobs, and has harmed the long-term value of companies like Hess and Arconic," said CWA President Chris Shelton. "Boosting earnings through headcount reductions, outsourcing, and reduced investment surely benefits Paul Singer and Elliott Management's wealthy investors, but what about everyone else?"

In an historic vote last Thursday, newsroom employees at The Arizona Republic voted to join NewsGuild-CWA, beating back an extremely aggressive anti-union campaign. The Arizona Republic Guild's victory comes ahead of a pending merger between Gannett and behemoth GateHouse Media that threatens to cut $300 million from the combined companies.

"This is an historic decision to protect local journalism," consumer reporter and organizing committee member Rebekah Sanders said. "We have sent a powerful message to Gannett that we expect dignified layoff severance, fair wages, and a voice in the decisions that affect our future."

Reporter Alden Woods, a member of the organizing committee, said, "Today our journalists won a collective voice in our future and the future of Arizona journalism. Tomorrow, we start putting that voice to good use."

On a National Day of Action on Wednesday, hundreds of CWA members across the country made phone calls to Congress to pressure them to pass the PRO Act. Our existing labor laws are out-of-date and inadequate to combat the greed of the 1%. The PRO Act will give CWA members more power to win the wages, benefits, and working conditions we deserve. It will protect strikers, make it easier for workers to join unions, prevent the misclassification of workers as independent contractors, deal a blow to "right-to-work" laws, and a lot more.

Have you made your call this week? It's not too late! Tell Congress we need to fight back by passing the PRO Act because our right to organize must be protected! Click here to send a message to your members of Congress. 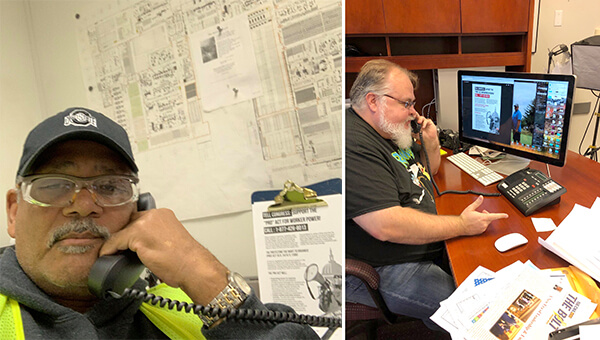 On a National Day of Action on Wednesday, hundreds of CWA members across the country made phone calls to Congress to pressure them to pass the PRO Act.

Companies Putting Shareholders Ahead of Workers are Harming our Communities

CWAers briefed members of Congress and their staff this week on how the recent rise of stock buybacks is harming workers, communities, and the whole economy.

CWA's Director of Government Affairs Dan Mauer outlined proposals from vulture capitalist fund Elliott Management, owned by billionaire Paul Singer, that would gut jobs at AT&T while using short term profits to buy back stock to boost the company's share prices. CWA District 3 Campaign Lead Marsha Vaughn shared the story of how after 29 years at AT&T, the company closed the Pensacola call center where she worked, forcing her to move away from her family on short notice.

"Over 50 of us who worked at the call center were given just five days to make a choice: move out of the state or lose your job. My family depended on my income, so I had no choice but to move to Nashville, which was seven hours away from my family and my life in Pensacola."

Vaughn pointed out that before the 2017 tax bill, AT&T promised they would create more than 7,000 jobs if the bill passed. Instead, in 2018, the company conducted $609 million in stock buybacks, which alone could have funded 6,625 jobs. Instead of investing in workers and building out its network, AT&T laid off thousands of workers across the country.

"In the Southeast region where I'm from, AT&T announced a surplus of over 900 employees in June," Vaughn said. "Hundreds of those employees were ultimately let go of. Thankfully, our union contract has protections so that people have an opportunity for a job offer within AT&T, but many could not move for a new position, so they were forced out in other ways. Many of the people who lost their jobs have worked for the company for over 20 years, and they depended on the job to support their families."

At a Congressional hearing on buybacks that followed the briefing, Representative Chuy Garcia (D-Ill.) raised the issue of Elliott Management's pressure to increase stock buybacks at AT&T. In response, economist Lenore Palladino of the Roosevelt Institute noted that instead of using free cash flow to buy back stocks, AT&T could instead invest in upgrading America's broadband infrastructure and support its workforce. 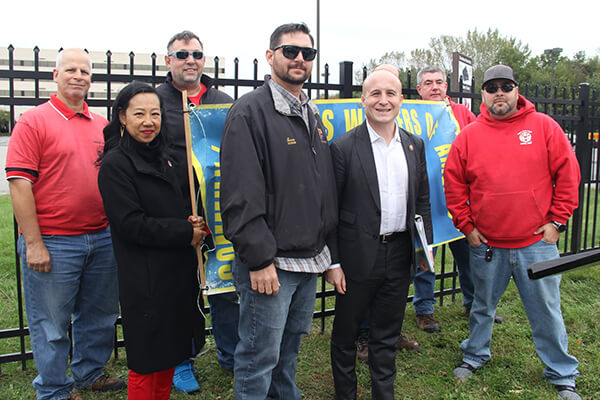 CWA Local 1102 members joined Rep. Max Rose last week on Staten Island for a press conference announcing his support for the U.S. Call Center Worker and Consumer Protection Act and the No Tax Breaks for Outsourcing Act, two vital federal bills supported by CWA to protect U.S. jobs. It's time to stop making it easier and more profitable for companies to ship our jobs overseas!

This weekend, California Governor Gavin Newsom announced a veto of the Protect Call Center Jobs Act of 2019 (AB1677), anti-offshoring legislation that would have protected California's working families and taxpayers while adding new accountability to the process big corporations rely on to relocate customer service jobs overseas.

"By vetoing the state call center bill, Governor Newsom made the wrong call and sided with the CEOs of multinational corporations instead of California's working families and taxpayers," said CWA District 9 Vice President Frank Arce. "The Protect Call Center Jobs Act would have been a big step toward strengthening the job security of working families in California. Governor Newsom's veto is a missed opportunity and the wrong call for California. CWA will continue its fight to protect California jobs and workers." 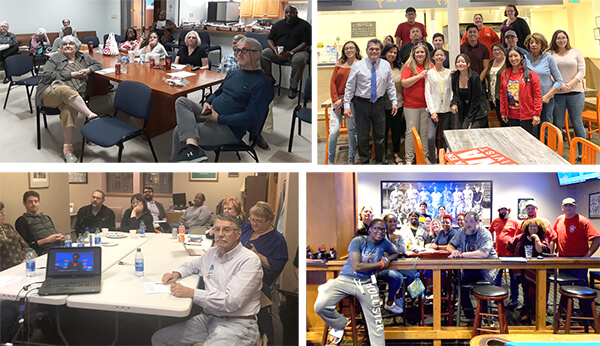 More than 100 CWA activists and local leaders held watch parties this week in Tennessee, Oklahoma, Minnesota, Oregon, California, and Nevada to watch the third Democratic Primary Debate to discuss the candidates' proposals on how to build worker power and to sign up activists for our CWA 2020 program.

Building Solidarity with Call Center Workers Around the World 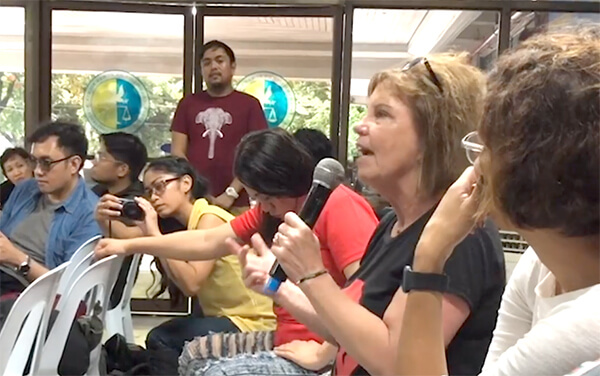 In August, a delegation of CWA members went on a fact-finding delegation to investigate the working conditions at call centers in the Philippines. They connected with union leaders and activists, and learned of the struggles that the workers face, in the hopes of building international solidarity. Check out this video to learn more.

Save the Date: Safety and Health National Conference