Learn more about the agreement here.

Passenger Service Agents at American Airlines subsidiary Envoy Air voted this week to ratify their first collective bargaining agreement with the company. The six-and-a-half year agreement covers 5,000 passenger service workers in 100 cities across the United States and provides wage and benefit guarantees for the life of the contract.

"I'm proud of our bargaining team and the passenger service agents who fought for over three-and-a-half years for a fair agreement with Envoy," said Richard Honeycutt, Vice President of CWA District 3 and Chair of CWA's Passenger Service Airline Council. "This contract provides the foundation for Envoy agents to ensure that they are treated fairly and equitably and have the support they need to provide outstanding service for American Airlines customers."

The contract covering 22,000 workers at AT&T Southeast expired at midnight on Saturday, increasing the possibility of a strike, which CWA members have authorized by a 95% vote. For now, workers will return to work without a contract in place as CWA members continue to negotiate for a deal that includes quality healthcare coverage, wage increases, job security, and investment in local communities.

"The contract didn't have to expire, but it did because AT&T has not been taking our proposals seriously," said Richard Honeycutt, Vice President of CWA District 3. "For weeks, we have pressed AT&T Southeast to move off of their bargaining demands that will hurt workers, their families, and our communities. We are ready to bargain for a fair and just contract, but we need AT&T Southeast to be ready to do the same."

Watch and share this Facebook video about CWA members' fight for a fair contract at AT&T Southeast.

After years of fighting for fair wages, custodians at Denver Public Schools (DPS), members of CWA Local 7777, won significant wage increases in 2019 bargaining. The wage increases came after CWA activists helped push the City and County of Denver to pass a minimum wage increase for city, county, and airport workers to $15 by 2021.

CWA Local 7777 Vice President Marlene Jimenez said, "For many of us, the schools we clean are our community and like a family. This is our heart. This victory is about respect and getting fair wages for the work DPS Custodians perform." 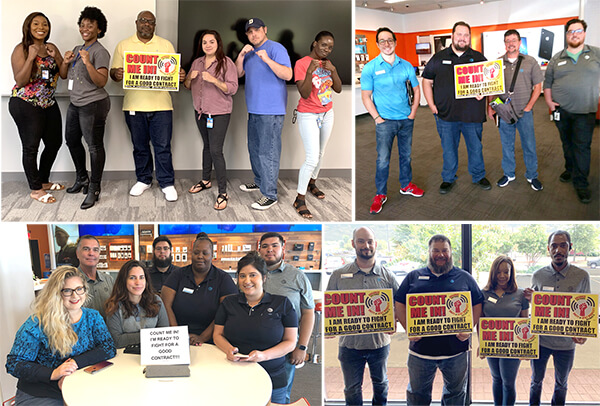 On July 24th, AT&T Mobility activists from 16 CWA District 6 Locals held actions in 81 locations to show that they are ready to ramp up mobilization as negotiations for a new contract approach.

Today marks the 30th anniversary of the passing of Gerry Horgan. Horgan, a 34-year-old member and chief steward of CWA Local 1103, was struck and killed by a car that drove into a picket line during the 1989 NYNEX strike.

At his funeral, a line of thousands of CWA members wearing red stretched for more than a mile along the route to the church. Today, and every Thursday, CWA members wear red to honor Gerry's memory and to show that we are united in the fight for justice for all working people. 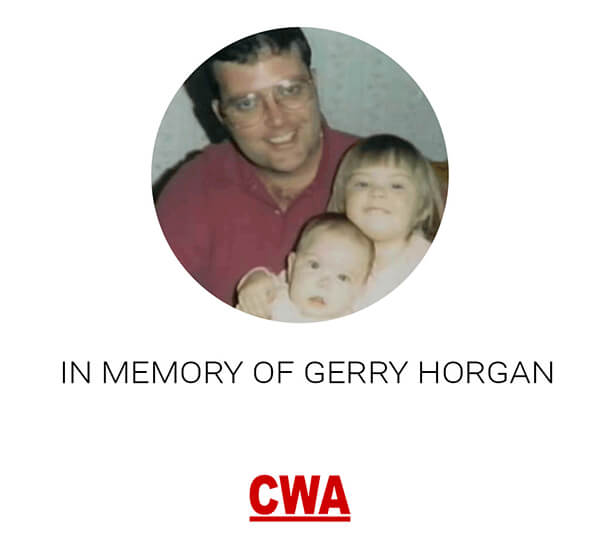 A group of former GDIT call center workers has reached a settlement with the company to resolve their allegations that the company failed to pay proper overtime wages to customer service representatives at its call centers. The proposed settlement, if approved by a judge, will result in the 182 former GDIT employees who joined the lawsuit splitting $80,000 in back wages. GDIT sold its federal call center business to Maximus, Inc., in November 2018.

The federal lawsuit was filed in April after GDIT workers reported to CWA that they believed the company had not properly tracked and compensated them for all hours worked. They had routinely performed preliminary work tasks that were not included in the company's "on-the-clock" timekeeping system, including logging into phones and computers, checking and responding to emails, and coordinating and scheduling calls and meetings.

"This proposed settlement shows that when we come together and organize, we can win," said Adrian Powe, a Hattiesburg, Miss., call center worker and a plaintiff in the lawsuit. "We will be continuing our fight to hold Maximus, our new employer, accountable. This is only the beginning of our efforts to join together to improve working conditions."

Learn how to get involved in Maximus workers' efforts to join together for a voice in the workplace here: https://www.callcenterworkersunited.org/.

Over the past two years, the Trump administration has been gradually rolling out changes to federal regulations to give even more power to corporate executives to put profits over people. If Trump's new Labor Secretary pick, Eugene Scalia, is confirmed, we can expect that roll to become a landslide.

Scalia has built up a long record of successfully dismantling regulations put in place to protect workers and consumers. In fact, Wall Street considers him their "secret weapon." If confirmed by the Senate, he will follow the Trump administration's blueprint of weakening employment and health and safety protections for workers in order to further enrich already wealthy CEOs and large shareholders.

Stay tuned for more details on how CWA members will be taking on Scalia's confirmation once hearings are scheduled by the Senate.

We're Taking a Break, But We'll Be Back!

Also, due to an unfortunate error, we did not receive any responses to last week's newsletter. If you sent a response last week, please resend it to news@cwa-union.org.