This week, CWA members in the Midwest and at AT&T's national Legacy T unit voted to ratify four-year agreements covering 14,000 workers. The new agreements provide wage increases of 10.5% over the life of the contracts, cap health care costs, and preserve jobs.

"This was a long, hard fight," said CWA District 4 Vice President Linda L. Hinton. "Thanks to the persistence of our bargaining team, the resilience of our members, and engagement from legislators and allies we won a contract that helps protect jobs and strengthen our communities."

"Although our members are spread out across the country, we were united in our fight for a fair contract that protects good jobs at Legacy T," said Telecommunications and Technologies Vice President Lisa Bolton.

Hundreds of CWA members at AT&T Southeast from across District 3 rallied outside the company's headquarters in Atlanta on Saturday to show that they're ready to do whatever it takes to get a fair contract.

In the final hours before the current contract was set to expire on Saturday night, negotiators for CWA and AT&T agreed to extend the contract in the Southeast region for one week, until midnight on Saturday, August 10.

"We're bargaining with a company that makes billions," said CWA District 3 Vice President Richard Honeycutt. "And it's also a company that promised to create jobs based on the tax cuts. They said 7,000 good, middle-class jobs, and what have they done? They've gotten rid of 20,000 jobs."

Margaret Cook, newly-elected Vice President of the Public, Healthcare and Education Workers sector, also spoke at the rally. "I come from District 3, and I'm here to show solidarity across the sectors," Cook said. "When they mess with one of us, they're messing with all of us. We're going to stand united." 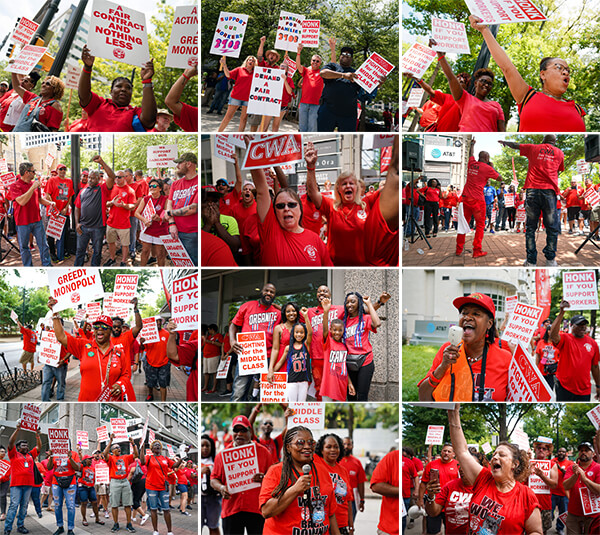 Hundreds of CWA members at AT&T Southeast from across District 3 rallied outside the company’s headquarters in Atlanta on Saturday to show that they're ready to do whatever it takes to get a fair contract.

Members of the Boston Newspaper Guild/TNG-CWA Local 31245 took a collective lunch break this Tuesday outside the Boston Globe building to show that they are united despite the company having shown that it has no intention of backing down from its draconian proposals. Given the slow pace of contract negotiations and the insulting strong-arm tactics used by the company's lawyers, members have decided to file an Unfair Labor Practice charge against the Globe.

After eight months of negotiations, the company still expects its employees to give up overtime, seniority, pay scales, job descriptions, severance, protections from having their jobs outsourced, and more. The union would also lose the right to defend its members against management abuses. In exchange, the company has offered small wage increases that would not be retroactive. Their negotiators even turned down a simple union request to extend the time vacations could be rolled over, even though it would cost the company nothing.

The Boston Newspaper Guild's members took a collective lunch break this Tuesday outside the Boston Globe building to show that they are united in their fight for a fair contract.

CWA Mourns the Senseless Loss of 31 in Mass Shootings

Over the weekend, mass shootings in El Paso, Texas, and Dayton, Ohio, left 31 people dead and many more injured.

"We must decide what type of country we want and what type of people we want to be," said Cummings. "It's not enough to point to elected leaders and say 'do something' before going on with our lives. They will offer up sympathetic words for victims and tough talk about the killers. But don't expect any meaningful action. They won't act until we do...The violence won't end until we elect leaders with the will to end it."

"Our thoughts and prayers go out to the families and communities surrounding both El Paso and Dayton," stated IUE-CWA President Carl Kennebrew. IUE-CWA's headquarters is located in Dayton. He also encouraged CWA members in both communities to reach out to local blood banks to determine if donations are needed.

During July, young activists from CWA Next Generation in District 3 signed up 100 new Next Gen members, as well as new CWA members and PAF contributors. They also generated more than 40 calls to their members of Congress, and collected over 620 postcards in support of legislation to end offshoring of call center jobs!

CWAers Build Support for Pro-Worker Legislation Across the Country 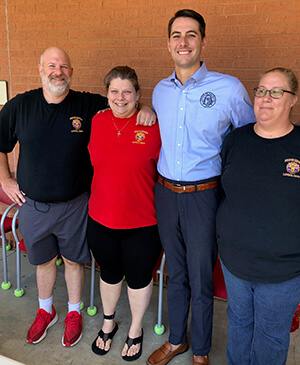 CWA activists in Arizona, Florida, Georgia, Massachusetts, New York, and Virginia have been mobilizing members across the country, collecting almost 1000 postcards in support of the No Tax Breaks for Outsourcing Act and the U.S. Call Center Workers and Consumer Protection Act over a two-week period in July.

At the 2019 CWA Convention in Las Vegas last week, CWA's Defense Fund Oversight Committee and the Executive Board jointly and unanimously agreed to increase the payout level to assist striking workers, effective August 1.

Photos from the 2019 CWA Convention

Check out our photo album from the 2019 CWA Convention last week in Las Vegas! 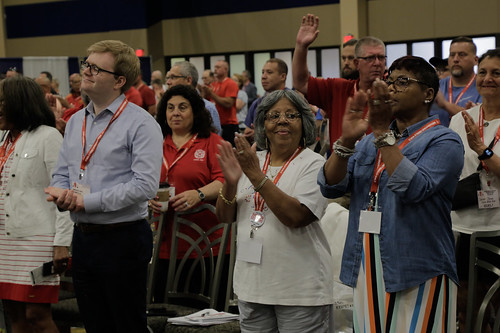 At the 2019 CWA Convention, frontline bank workers from Wells Fargo, BNP Paribas (Bank of the West), and Santander met with bank workers from Italy, Brazil, and Luxembourg to build global solidarity to hold the management of big banks accountable to workers and consumers. After hearing firsthand from the workers how stressful and abusive working conditions are in the U.S., UNI Finance leaders committed their support to making sure U.S. bank workers gain the same rights as bank workers in other countries.

"One-third of all finance workers are in the U.S., but they are the only ones without a trade union," said Angelo Di Cristo, Head of Department at UNI Finance, "We are committed to supporting CWA's campaign to organize American bank workers so they can have the same dignity and rights as the three million bank workers around the globe who are already members of a trade union."

CWA filed comments last week with the Federal Communications Commission (FCC) in opposition to the FCC's recent proposal to cap the Universal Service Fund (USF). The USF supports four programs designed to provide universal quality access to voice and broadband services at just, reasonable, and affordable rates: the Connect America Fund for rural communities, the Schools and Libraries program or E-Rate, the Lifeline program for low-income households, and the Rural Health Care program.

"By capping the USF and forcing programs to compete for resources, the Commission risks undermining the USF programs, negatively impacting a wide range of stakeholders and beneficiaries including low-income people, schools, libraries, children, rural health care facilities and patients, Native tribes, as well as those who live in rural and remote areas across the United States," CWA said in its comments to the FCC. "Capping the USF and thereby reducing the subsidies it provides would not only reduce the number of households that can afford Internet connections, it would impact everyone."

IUE-CWA has awarded six partial college scholarships for the 2019-2020 academic year. IUE-CWA members' children and grandchildren, including those of retired or deceased members, were eligible for the awards.

Applications for the 2019-20 academic year will open this Fall. For more information, visit https://www.iue-cwa.org/scholarships.