If confirmed by the Senate, President Trump’s new pick for Labor Secretary, Eugene Scalia, will follow the Trump administration's blueprint of weakening employment and health and safety protections for workers in order to further enrich already wealthy CEOs and large shareholders.

"It's no surprise that Eugene Scalia, President Trump's new pick for Labor Secretary, has a long record of representing big business at the expense of working people," said CWA President Chris Shelton. "He's spent his whole career helping big business clients shirk their responsibility to treat their workers with respect and dignity, while also taking special interest in dismantling Wall Street regulations that protect consumers. In case that's not enough, Scalia worked to defend Walmart when they fired whistle-blowers who reported misconduct, telling you everything you need to know about which side he's on."

Shelton vowed that CWA members are ready to fight against the inevitable onslaught of more new anti-worker regulation from the Trump administration if Scalia assumes the job.

Spurred by a deep round of layoffs, BuzzFeed News employees announced their intention to join together and form a union this past February. After five months of management stonewalling the employees on their request to voluntarily recognize the union, about 80 BuzzFeed staff officially joined NewsGuild-CWA Local 31003 this week. Negotiations on a first contract will begin soon.

"We stayed strong in the face of fierce resistance from BuzzFeed management," Rachel Sanders, a deputy culture editor at BuzzFeed and a member of the union's organizing committee, told the New York Post. "Now that we're finally recognized, I'm excited to bargain for a contract that will not only make this a stronger newsroom and company, but raise the bar for how workers are treated across our industry." 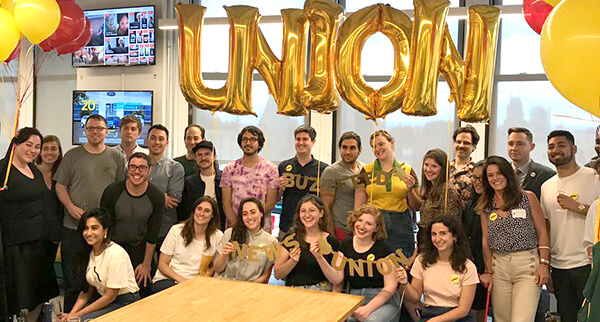 After five months of management stonewalling the employees on their request to voluntarily recognize the union, about 80 BuzzFeed staff officially joined NewsGuild-CWA Local 31003. 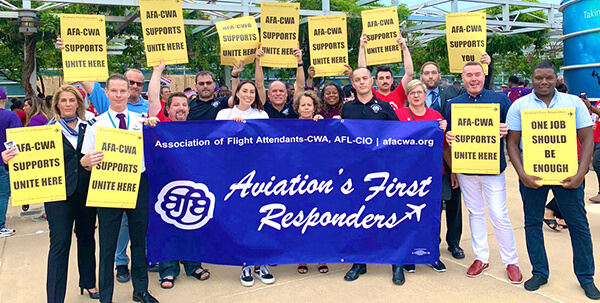 American Airlines, Delta, and United made more than $50 Billion in combined profits in just the past five years alone, but Flight Attendants at regional airlines and the workers who prepare and load food and beverages onto our planes are often left living in poverty and unable to afford healthcare. AFA-CWA members joined UNITE HERE! catering workers fighting for fair wages and quality healthcare at an informational picket on Tuesday at Washington National Airport to show these big airlines that these workers’ fight is CWA members’ fight, too. 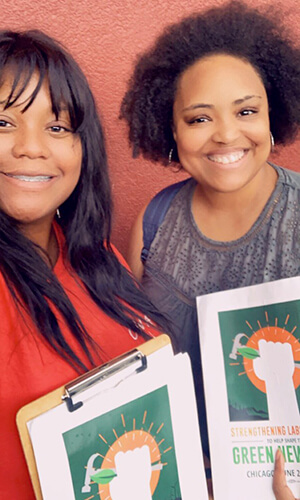 CWA members Brooke Patterson (left) of Local 3611 and Timmia McIlwaine (right) of Local 3640 attended the Labor Network for Sustainability Convergence in Chicago in June. Discussions included the importance of a just transition so that workers who work in the fossil fuel industries can find equal or better union jobs in the renewable energy sector. The two CWA activists engaged in workshops on worksite organizing for a greener economy and the importance of racial equity when we engage in climate justice.