CWA members at AT&T Southeast voted overwhelmingly this week to authorize a strike, if necessary. The current contracts at BellSouth Telecommunications, Utility Operations, and BellSouth Billing cover more than 20,000 workers in CWA District 3 and are set to expire on Saturday, August 3.

"Our bargaining team has brought proposals to the table that will ensure that AT&T does not leave communities behind in the Southeast. Our members are prepared to do whatever it takes to support their negotiations," said CWA District 3 Vice President Richard Honeycutt. "AT&T is highly profitable and has received huge tax windfalls in the past few years. The company should be investing in its network and in its workforce so that we have modern, reliable telecommunications service everywhere, not just in the big cities and wealthiest areas. It should keep customer service jobs here where its customers are instead of shipping them overseas." 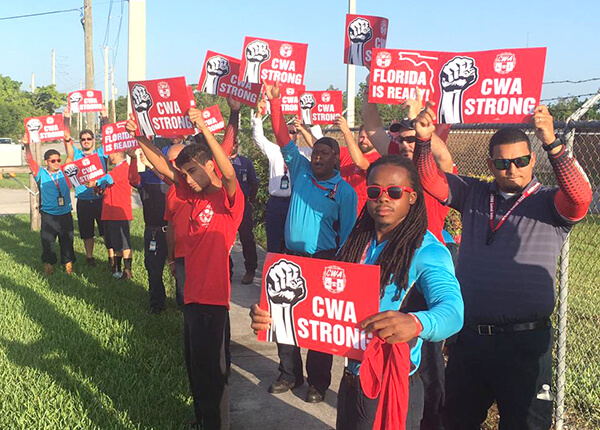 CWA members at AT&T Southeast are showing the company that they are ready to do whatever is necessary to fight for a fair contract.

"Today, we ratified a new contract that will provide much needed wage increases for Flight Attendants and their families," said Lee Wilkes, AFA-CWA PSA President. "We work hard as aviation's first responders within the American Airlines brand. This contract provides real improvements, and it is also a better platform for us to stand with Flight Attendants around the industry to raise standards for Flight Attendants working at regional airlines."

A Verizon Wireless worker who was fired in June after six years of stellar performance reviews filed a discrimination complaint with the Equal Employment Opportunity Commission (EEOC) against the company on July 1, and is now publicly sharing his story of how he faced constant racial discrimination at work from customers and managers.

Martin Hopkins, who worked as a Sales Solution Specialist in Lancaster, Ohio, told the Columbus Dispatch about how management permitted the usage of racial slurs and jokes and accommodated customers who refused to be served by a black man.

Hopkins had gotten on the radar of Verizon Wireless management before for standing up for his coworkers and customers. A little more than two years ago, Martin began talking with his coworkers about the possibility of organizing a union. Martin says that a high-level official from Verizon Wireless management came to the store, individually spoke with each employee and said that they could lose their jobs and the location could close if the workers exercised their right to join together. This scare tactic effectively killed any talk of a union at the store.

Martin also faced blowback from management when he stood up for customers, for example when he insisted they get credits owed to them. In fact, it was this type of disagreement that seems to have been used as an excuse for Martin's firing.

The Ohio Organizing Collaborative, a social justice coalition that includes CWA, community groups, and faith organizations, sent a letter to Verizon this week calling for the company to reinstate Hopkins and to conduct implicit bias training for managers and employees across the corporation. Stay tuned for updates and actions you can take to support Martin, and visit https://www.facebook.com/VZWrising to learn more about Verizon Wireless workers coming together.

NewsGuild-CWA members joined Democratic members of Congress today as they introduced the Stop Wall Street Looting Act, a comprehensive bill to fundamentally reform the private equity industry. The NewsGuild-CWA has been fighting on the front lines as private equity has gutted local news organizations. The bill is sponsored in the U.S. Senate by Elizabeth Warren (D-Mass.), Tammy Baldwin (D-Wis.), Sherrod Brown (D-Ohio), and in the U.S. House by Mark Pocan (D-Wis.) and Pramila Jayapal (D-Wash.).

Julie Reynolds, a freelance journalist who has spent more than three years investigating Alden Global Capital, which owns Digital First Media, for the NewsGuild-CWA, The Nation, and other news outlets, spoke at the event, sharing how the "vulture" hedge fund has taken over local papers across the country – including the Monterey Herald, where she worked up until 2015 – stripping the papers for parts under its chop-shop approach.

"Under Alden's tenure, layoffs and attrition accelerated at breakneck speed," Reynolds said. "Instead of a story a day, reporters scrambled to crank out two or three because there were fewer and fewer of us. The office supplies vanished and we had to buy our own pens, calendars, and manila folders. The hot water in the bathrooms was turned off. The gutters were never repaired and staff creatively arranged house plants to try to soak up the leaks. Then, as with most newspapers in the Digital First chain, the presses were dismantled and our buildings sold."

She also described how Alden caused towns in the paper's coverage area to become "news deserts," with local corruption scandals going unreported as they closed down local bureaus and made it impossible for journalists to cover the region.

"It's time to make hedge funds and private equity transparent and accountable," Reynolds said. "History will not judge us kindly if one day we wake up to realize we failed to protect our communities' right to know and, in turn, our very democracy." 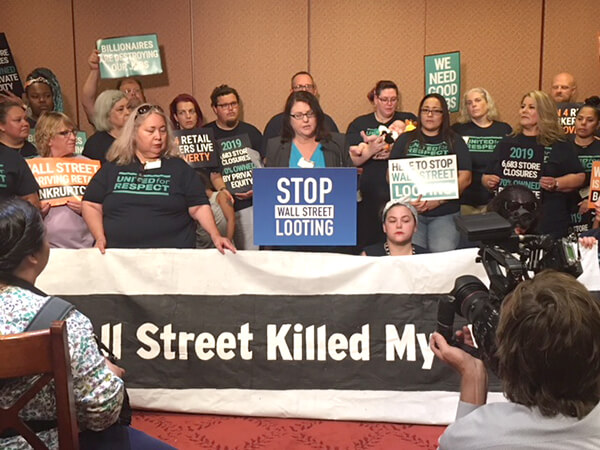 The federal minimum wage hasn't been increased by a penny in the last decade. Meanwhile, the cost of living has substantially increased for working people. For many, working 40 hours or more a week is not enough to support themselves and their families and the low floor makes it more difficult to raise wages at the bargaining table. Airline employees, call center workers, retail store employees, and bank workers are among those who work full time for some of the most highly profitable corporations, but still earn poverty level wages.

"Anyone who works full time deserves to earn a living wage so they can live with dignity and respect," said CWA's Director of Legislation, Politics, and International Affairs Shane Larson. "It is time to raise the wages of these low income workers and ensure the economy works for everyone, instead of just those in the 1%."

CWA's campaign to end the offshoring of U.S. call center jobs is picking up steam! Last week, a piece in Roll Call highlighted CWA members' progress in urging legislators to pass call center bills at the state and federal level.

CWAers in Minnesota, Arizona, Georgia, and Colorado participated in mobilization trainings last week and this week. The trainings focused on educating core activists on the #NoMoreOffshoring campaign, effectively mobilizing members, and the importance of CWA's Political Action Fund. Next Gen activists in Florida, Tennessee, and other states mobilized activists to make calls and sign postcards.

Under new Trump administration Acting Labor Secretary Patrick Pizzella, we can expect more of the same from President Trump's Department of Labor – more weakening of employment and health and safety protections for workers in order to further enrich already wealthy CEOs and large shareholders.

Pizzella has a disturbing history of actively working against the best interests of working people, most notably lobbying for policies on the Northern Mariana Islands that essentially allowed the "Made in the U.S.A." label on goods and clothing performed under slave labor conditions. 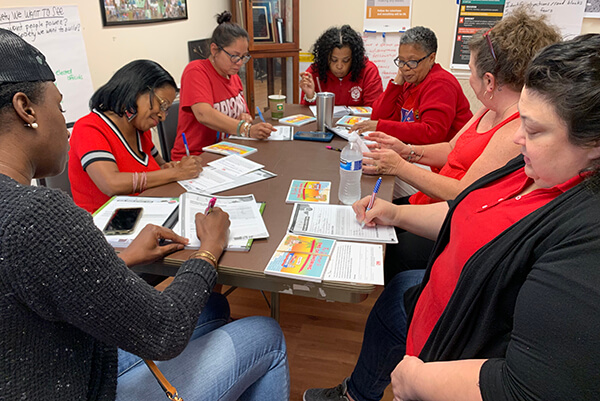 Eighteen customer service workers from Verizon, AT&T Mobility, and American Airlines – members of CWA Locals 2201, 2204, and 2205 – attended a CWA Political Boot Camp in Richmond. The participants are looking forward to the 6+ week follow-up program and continuing to build power for working people in Virginia. The training was made possible by CWA's Customer Service SIF and the CWA Legislative-Political Department SIF. 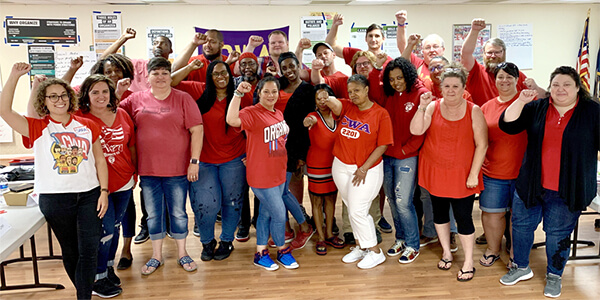