The agreements come after a long campaign to raise public awareness of CWA members' concerns, particularly around job security. Most recently, CWA issued a series of reports highlighting service quality issues in the Midwest and, last week, members of Congress, led by Rep. Darren Soto (D-Fla.), wrote a letter expressing concern that AT&T continue to provide good jobs in Puerto Rico as the island continues to recover from Hurricane Maria. The new Midwest agreement provides for additional call center jobs and contains a commitment to discuss contracted out work and the Puerto Rico agreement contains a guarantee that customer calls will continue to be handled on the island.

Details of the proposed contracts are being provided to the locals' leadership, and contract explanation meetings are being scheduled prior to the ratification vote.

Big corporations are sending more and more of our jobs overseas to boost their profits at the expense of working people, but we're fighting back!

CWAers all across the country are speaking up and taking action to stop corporations from offshoring more jobs. Last week, CWA members held a Day of Action, placing more than 1,500 calls to their members of Congress asking them to support legislation to help stop offshoring.

Join CWA activists, President Chris Shelton, and U.S. Senator Sherrod Brown (D-Ohio) for a CWA town hall call on July 9th at 7:30 pm ET/4:30 pm PT to talk about our Summer of #NoMoreOffshoring campaign and what CWA is doing to fight back against the offshoring of U.S. jobs.

Sign up for the call by visiting CWA-Union.org/NoMoreOffshoringCall. Or just text CWA CALL to 49484.

More than 30 Years Ago, Women Sued the AP for Gender Discrimination — And Won

More than 30 years ago, seven women journalists, with the help of what is now the News Media Guild/NewsGuild-CWA Local 31222, filed a lawsuit against the Associated Press, winning a $2 million settlement that provided for back pay, training, promotion goals, and bonuses for AP's female and black journalists. When the women sued, the average annual salary for male reporters was about $20,000 compared to about $16,000 for women.

The NewsGuild-CWA interviewed the women as part of its ongoing equal pay project, which includes analyses of pay at publications including The Philadelphia Inquirer and The Washington Post. Martha Waggoner, the international chairperson of The NewsGuild-CWA and a 35-year employee of the Associated Press, wrote about the lawsuit for Poynter.

"I'd love to say that everything's fine now," Virginia Sherlock, one of the plaintiffs who filed the lawsuit said. "But it's not. Women and minorities are still not at the same pay level. I can say with some measure of satisfaction that huge steps have been taken...But c'mon, what is it, 40 years? We can do better."

When asked why the Next Gen program is so important to our union, participant Eli Stanfield said, "The union is intergenerational, from workers in their first jobs to elders with decades of organizing experience. Next Gen provides an opportunity to pass on that wisdom to the next generation of union leaders."

When asked why he is active in the union, participant Dan Warren-Castillo said, "I'm active because I feel like my future is tied up with the future of the labor movement. My dignity and well-being as a worker depends on the victories of the working class as a whole." 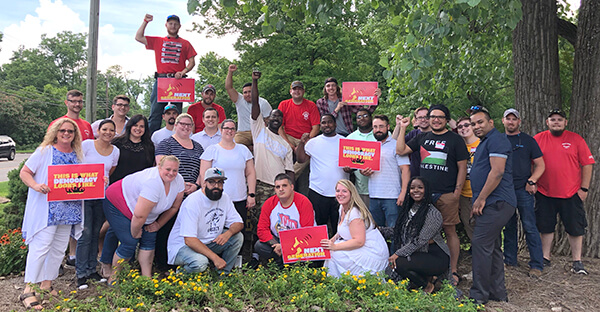 CWA Local 3808 in Nashville, Tenn., hosted a CWA Next Generation Activist Training to help participants build practical organizing skills and give them opportunities to roleplay one-on-one conversations with fellow members. 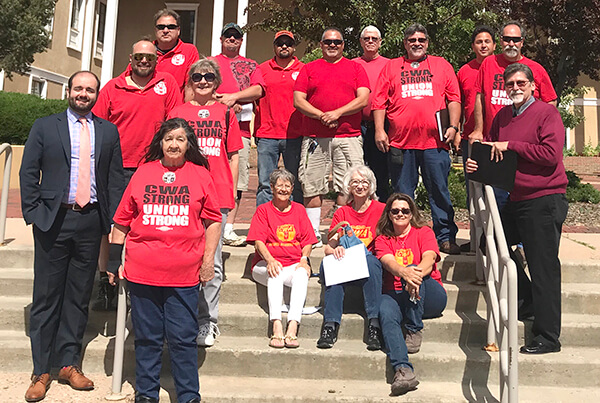 CWA members participated in a New Mexico Public Regulation Commission hearing on rulemaking regarding CenturyLink service quality. Joe Gosiger, a CWA staff rep, testified about how the company's lack of investment, understaffing, and unreasonable metrics have contributed to CenturyLink's failure to maintain its copper infrastructure and how it is jeopardizing service quality and posing significant safety hazards to utility employees and the public.

Last week, 15 CWAers from 11 different locals across CWA District 7 participated in a CWA STRONG internal organizing training in Denver, Colo. CWA Local 7050 helped lead a discussion on building a culture of organizing and mobilizing in our locals and the led the participants in a mock new employee orientation. 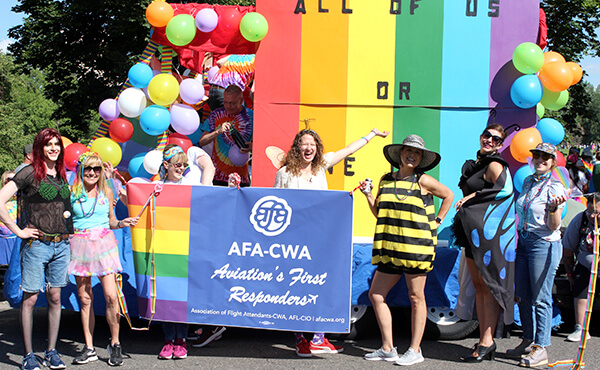 The Frontier Airlines AFA-CWA Human Rights Committee held their first activity as a committee, participating in the Pride Parade in Denver.