UPTE-CWA Local 9119 Healthcare, Research, and Technical members went on a one-day Unfair Labor Practice strike last week in response to UC's moves to secretly outsource UPTE-CWA members' work while they are working without a contract, which is illegal.

UC plans to eliminate nearly 40 jobs at a new rehab center in Davis by contracting out work to a "joint venture" with for-profit Kindred Healthcare. UPTE-CWA has also recently learned of UC's plans to outsource $56 million in IT services across all five UC Medical Centers, including UPTE-CWA members' work, as well as a plan authorizing the outsourcing of more than $150 million of clinical, non-clinical, and IT jobs at the Medical Centers.

In February, UC presented UPTE-CWA with their so-called "last, best, and final offer" for Research and Technical members, which contains unnecessary and unacceptable cuts including eliminating step increases for pay, no daily overtime or protections for full-time work, putting pension benefits in jeopardy by pushing new hires to choose a risky 401(k), and more. The offer would also limit the right to file a grievance in cases of sexual harassment and sexual violence.

UC executives recently announced that they would be forcing their proposals on 10,000 Research and Technical workers immediately, with some terms taking effect June 1. However, this imposition is not the end. UPTE-CWA members will continue to fight for a fair contract at UC.

UPTE-CWA Local 9119 Healthcare, Research, and Technical members went on a one-day Unfair Labor Practice strike in response to UC's moves to secretly outsource UPTE-CWA members' work while they are working without a contract.

The CWA Envoy Air bargaining team met with a federal mediator this week in Dallas on Monday and Tuesday. During the opening session, the team shared 2,000 signatures from agents at more than 40 stations on a petition demanding higher wages and a fair contract to show the company and the mediator that agents across the system are united.

Although the CWA bargaining team brought a complete package of proposals to Envoy in April, the company did not have a complete package of proposals or responses, leading to the cancellation of the third day of mediation. This lack of respect for the bargaining process and Envoy's dedicated employees is simply unacceptable. The mediator made it clear that he expects both parties to come to future meetings fully prepared and ready to make progress and negotiate. Mediation will resume in Pittsburgh from June 18-20.

The NewsGuild-CWA had a huge week in organizing, with workers at four different digital publications joining the union! Employees of Ars Technica, Pitchfork, Quartz, and Fortune are the most recent wave of journalists who have united to improve their workplaces.

Quartz is a business news publication owned by the Japanese media company Uzabase. Sixty of its more than 230 employees (on five continents) will be represented by the NewsGuild of New York-CWA Local 31003. Ars Technica, which covers technology and science, and Pitchfork, which covers music criticism and news, are Condé Nast publications. The digital employees at Fortune magazine are joining the 41 percent of print staff at the magazine who already had union representation with the NewsGuild-CWA.

"These journalists are standing up and fighting for the future of their profession," said NewsGuild President Bernie Lunzer. "We're thrilled to have them join our ranks." 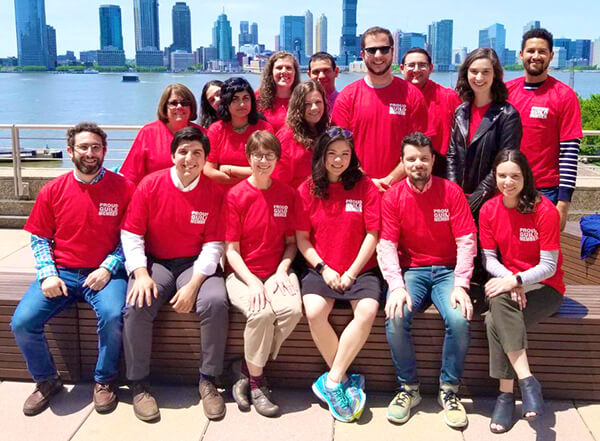 Employees of Ars Technica, Pitchfork, Quartz, and Fortune (pictured) are the latest to join the wave of journalists who have been rapidly forming unions in their workplaces.

Alden Suffers Stinging Defeat in Effort to Take Over Gannett

Alden owns a chain of nearly 200 publications, formerly known as DFM and now known as MediaNews Group or MNG. Gannett owns the largest newspaper chain in the U.S.

The NewsGuild-CWA had called on Gannett shareholders to reject Alden's takeover efforts. Speaking at Gannett's shareholders meeting, NewsGuild-CWA President Bernie Lunzer said the union supported Gannett's candidates for the company's board of directors – despite differences on other issues – because of the need for sustainable journalism, which Alden undermines at every turn. "It is a victory for workers at Gannett papers and for the readers they serve," Lunzer said.

In an April 11 letter to Gannett shareholders, the NewsGuild-CWA and the Teamsters together wrote, "We believe that hedge funds in general and Alden in particular have had a destructive impact on the news industry. They have slashed staff and sold real estate to extract cash from the news organizations without regard to the role news organizations play in communities."

More than 100 members of the Texas State Employees Union-CWA Local 6186 carried out a multi-faceted organizing blitz for three weeks in May. With help from organizers, activists, stewards, and campaign leads from across the country, they signed up 318 new members at state agencies and universities across Texas!

As part of the blitz, TSEU-CWA members ramped up the final push on their pay raise campaign by hand delivering postcards to key legislators in the final days of the legislative session.

The last time state workers saw an across-the-board raise, in the 2015 legislative session, it was completely wiped out by an increase in state employees' contributions to the pension fund and big cost increases in dependent health care coverage. With turnover rates at state agencies higher than they've been since 1990, TSEU-CWA members are calling for legislators to give all state agency and university workers a long-overdue $6,000 raise.

TSEU-CWA members also turned out hundreds of votes for TSEU-CWA member Cora Bennett, who is running for the pension fund Board of Trustees. 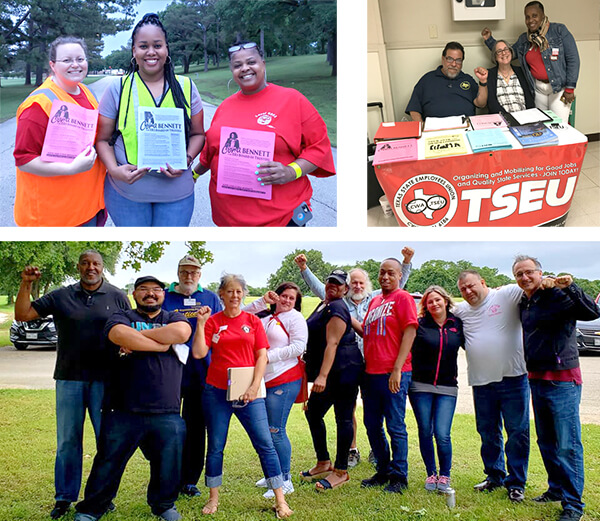 More than 100 members of the Texas State Employees Union-CWA Local 6186 carried out a multi-faceted organizing blitz for three weeks in May. With help from organizers, activists, stewards, and campaign leads from across the country, they signed up 318 new members at state agencies and universities across Texas.

Big news in Connecticut: after years of organizing and campaigning by workers, unions, and community groups, the Connecticut legislature voted this month to raise the state's minimum wage to $15 per hour!

CWA Local 1298 members have been making regular trips to Hartford to make sure our elected officials understand that fair, livable wages for all workers benefit not just the workers themselves, but the entire community.

The Connecticut State House voted on May 9th to pass the bill, led by bill sponsor and friend to CWA, Representative Robyn Porter. The current $10.10 minimum wage will increase to $15 by June 2023, and will be indexed to the rate of inflation, meaning workers won't have to continuously fight for minimum wage increases going forward. 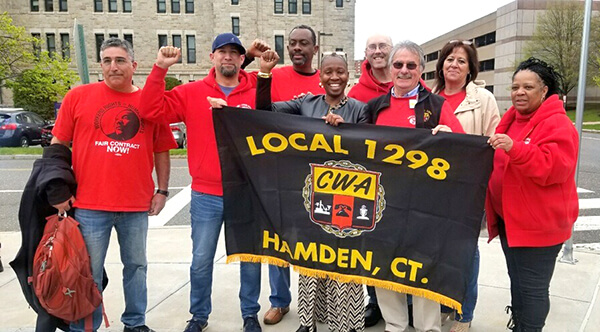 CWA Local 1298 members have been making regular trips to Hartford to make sure our elected officials understand that fair, livable wages for all workers benefit not just the workers themselves, but the entire community. 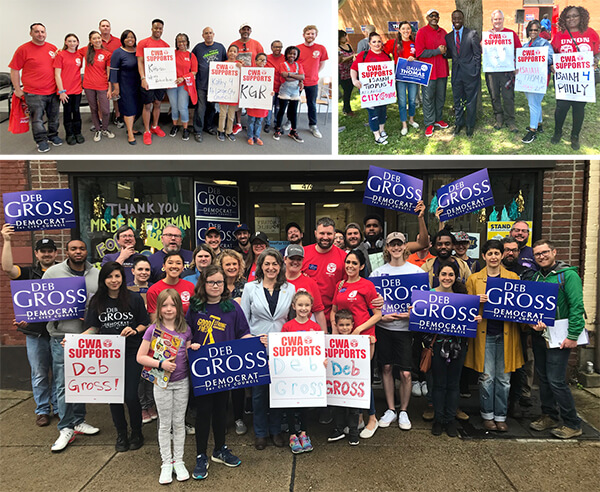 To figure out why Verizon's response to Hurricane Michael was considered poor in comparison to AT&T's response, CWA conducted a survey of its AT&T wireline technicians who worked on the recovery in Panama City. The findings, which CWA included in an FCC filing this week, show that Verizon failed Floridians and Georgians affected by the hurricane by relying on non-union contractors to respond to the damage. In contrast, AT&T used union-represented employees, allowing the company to immediately deploy a well-trained workforce large enough for the critical task at hand.

A piece in Ars Technica this week examined how Verizon's non-union contractors struggled to handle the big task of rebuilding, from not having the proper credentials to access Verizon's equipment to not showing up fast enough to restore critical service. The piece also highlights how the FCC's reliance on useless, weak, voluntary commitments from carriers instead of instituting strong regulations for disaster recovery made tens of thousands wireless customers have to wait days, unnecessarily, for their mobile phone service to be restored.

It's Time to Pass a Wall Street Sales Tax

This week, Senator Bernie Sanders (I-Vt.) and Representative Barbara Lee (D-Calif.) introduced the Inclusive Prosperity Act, which imposes a Wall Street sales tax to generate trillions of dollars in public revenues over ten years to invest in the needs of the American people.

The bill would curb risky Wall Street gambling and help prevent the kinds of financial crashes that weaken pensions and gut retirement savings and leave CWA members and millions of others across the country out of work.

"Enacting a Wall Street sales tax is the first step toward leveling the playing field for working families," CWA Legislative Associate Elena Lopez said at a press conference with Sanders, Lee, and other unions and allies announcing the introduction of the bill. "Especially at a time when we're seeing companies like AT&T, GM, and Wells Fargo slashing jobs and moving work overseas due to the disastrous Trump tax bill, CWA members are tired of tax giveaways to the 1%. The Inclusive Prosperity Act shows that Congress is changing course. It's time to get this done!" 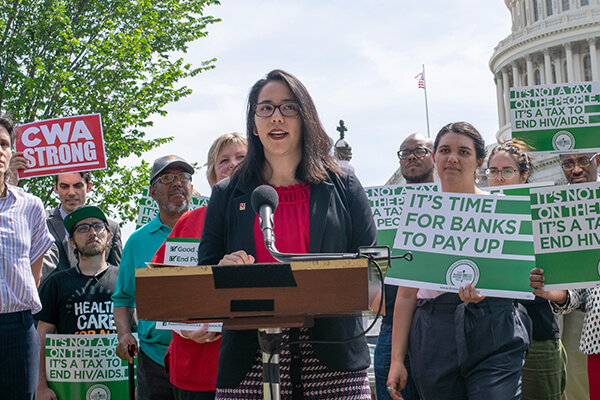 CWA Legislative Associate Elena Lopez spoke at a press conference along with Senator Bernie Sanders (I-Vt.) and Representative Barbara Lee (D-Calif.) as they introduced the Inclusive Prosperity Act, which imposes a Wall Street Sales Tax to generate trillions of dollars in public revenues over ten years to invest in the needs of the American people.

"By failing to maintain its copper infrastructure, CenturyLink is failing its employees, jeopardizing service quality, and putting the public at risk," said CWA Staff Rep. Joe Gosiger. "We've already seen the consequences, now the Commission must take action to adopt strong regulations that will stop this deterioration of telecommunications services for New Mexicans." 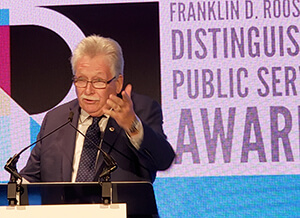 CWA President Chris Shelton is this year's recipient of the Franklin D. Roosevelt Distinguished Public Service Award. The award, presented by the Roosevelt Institute, honors individuals whose careers exemplify President Roosevelt's extraordinary dedication to public service and seek to inspire a renewed national commitment to the principles for which FDR stood. Congresswoman Maxine Waters (D-Cal.), a formidable ally for working people and CWA in Congress, was this year's other honoree.

"Democracy cannot survive without a vibrant labor movement," Shelton told attendees at the award ceremony this week. "We must restore the right of workers to organize to defend themselves. Together, we are going to build that progressive populist movement and make sure the Democratic Party stands up and fights for our values. We will bring power back to the working people of this country."

Members of CWA Locals 4320, 4400, 4502, and IUE-CWA Local 84755 attended a CWA Political Activist Training in Columbus last week where they took a deep dive into the challenges the labor movement is facing and gained skills to continue to build the movement for CWA workers and working people. Activists learned to how to engage their fellow workers in organizing conversations and create concrete plans of action to build working class power.