May 2, 2019 - Workers Triumph over Union-Busting Tactics!

CWA members from across the country demonstrated and distributed flyers outside of AT&T's annual shareholder meeting in Dallas, Texas, on Friday. The workers continue to put pressure on Congress to investigate AT&T and call the company's CEO Randall Stephenson to testify before the House Ways and Means Committee about why AT&T has not kept its promise to use its enormous tax cut benefits to create jobs and invest in American communities.

This week, CWA released a set of videos providing workers' personal, firsthand accounts of AT&T's layoffs and outsourcing. The videos are part of an online advertising campaign that encourages concerned customers to join the call for an investigation by sending letters to Congress.

CWA members from across the country demonstrated and distributed flyers outside of AT&T's annual shareholder meeting in Dallas, Texas, on Friday. 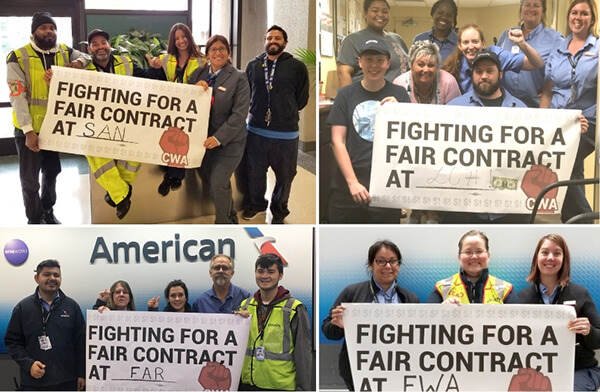 Envoy workers are delivering letters to station managers expressing their support for their bargaining team and their determination to win a fair contract with living wages. Bargaining resumes on May 20.

CWA members at EVOQUE (formerly AT&T internet data centers) have overwhelmingly voted to ratify an agreement reached with the company. Approximately 75 workers across the country are covered by this new agreement, which contains wage increases, lower out-of-pocket costs on healthcare, improvements on retirement benefits, improved job security, and more.

Last week, digital employees of TIME requested voluntary union recognition, seeking union protection and equity with the magazine's print employees. Although the publication has been represented by the NewsGuild-CWA for nearly 80 years, the former owners of Time Inc. kept employees they identified as "digital" out of the bargaining unit.

"For years, the publication has operated as a two-tier system, whereby the print staff has the protection of our Collective Bargaining Agreement and the digital staff does not," said Leslie Dickstein, Unit Chair of the publication. "This is an artificial and outdated divide. We believe every worker at TIME deserves the benefits and protections of a union contract. We couldn't be happier to stand with our digital colleagues in requesting voluntary recognition and joining us as Guild members."

Fighting back against anti-union tactics from the company, two groups of workers at telecom company Altice in Logan and Beckley, W. Va., voted for union representation with CWA over the past two weeks.

Workers in Logan endured captive audience meetings, in some cases running as long as three hours, twice a week. In these meetings, workers challenged management and the anti-union consultant on the truthfulness of their claims. The workers never wavered in their support for each other and pursuit of having a union.

In Beckley, despite having to sit through captive audience meetings full of lies and half-truths, workers prevailed in the election for union representation. In order to support the efforts of their colleagues, techs from Logan spoke with the techs from Beckley and shared their experiences with the company's lies at the captive audience meetings they had the week before. 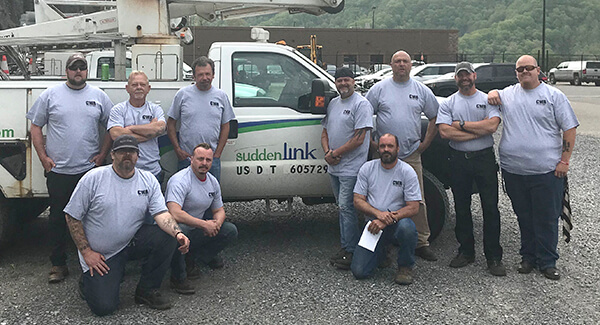 Workers at Altice in West Virginia never wavered in their support for each other and pursuit of having a union.

This Workers' Memorial Day, April 28, and every day, CWA is on the front lines in the fight to protect safety and health standards and ensure that the Occupational Safety and Health Administration conducts the inspections and oversight that workers deserve.

In 2017, 275 workers died each day due to job injuries and illnesses, on average, according to a report released this week by the AFL-CIO. 5,147 workers lost their lives on the job as a result of traumatic injuries, according to fatality data from the Bureau of Labor Statistics. This does not include those workers who die from occupational diseases, estimated to be 95,000 each year.

The report, titled Death on the Job: The Toll of Neglect, shows the highest workplace fatality rates are in Alaska, North Dakota, Wyoming, West Virginia, and South Dakota.

With the Trump administration and Republicans in Congress working with corporate lobbyists to weaken workplace protections, the work of CWA members fighting on the front lines to improve, maintain, and promote safety at work is more important than ever.

CWA especially remembers these members and others who were killed on the job over the past year:

Anthony Edwards, 51, a member of CWA Local 3204 in Atlanta, died in an on-the-job automobile accident.

Timothy Jason Lowery, 41, a member of CWA Local 3218 in Marietta died in an on-the-job automobile accident when another vehicle crossed the centerline and caused a head-on collision.

Stephen Jamar Shanks, 26, a member of IUE-CWA Local 84693 in Selma, Ala., suffered fatal burns to his hand, face, neck, and legs in a workplace explosion caused by a molten silicon spill.

Steven B. Herring, 55, a member of IUE-CWA Local 83761 in Louisville, was pinned by a metal fixture that holds foam installation on an assembly line that builds refrigerators and died of his injuries.

Gale Giles, a member of CWA Local 4050 in Warren, Mich., died in an accident in a company vehicle.

Georges Armand, 61, an Envoy bus driver at Miami International Airport suffered a fatal heart attack in the employee break room. Excessive overtime may have contributed to his death.

Gerald Fischman, 61, Rob Hiaasen, 59, John McNamara, 56, Rebecca Smith, 34, and Wendi Winters, 65, were killed when a mass shooting occurred at the offices of The Capital Gazette in Annapolis, Md. The newsroom was in its early organizing stages with The NewsGuild-CWA at the time of the shooting and was certified as a unit of TNG-CWA in December.

Local leaders from across Canada gathered in Windsor for the CWA Canada National Representative Council last week to develop strategies for building on recent organizing success in newsrooms across North America and make our union stronger.

At the meeting, CWA President Chris Shelton talked about the Trump administration's assault on labor unions and workers' rights in the U.S. and warned CWA members in Canada to fight back before it's too late. "We can't let the politicians and corporations keep turning up the heat on our trade union movement," said Shelton. "We must fight now, while in Canada we still represent 15% of the private sector workforce. We must expand our presence and not let our gains be rolled back."

Local leaders from across Canada gathered in Windsor for the CWA Canada National Representative Council to develop strategies for building on recent organizing success in newsrooms across North America and make our union stronger.

CWAers across the country continue to make progress on passing legislation to protect call center jobs from offshoring! Here are the new updates on CWA members' hard work to pass this critical legislation:

This week, the CWA-supported Colorado Call Center Job Losses Monitoring Bill (H.B. 19-1306) passed the State Senate with bipartisan support (24 to 11). CWA members helped make it happen by testifying in hearings, lobbying their legislators, signing postcards, and making phone calls to their lawmakers. Next it goes to the Governor's desk to be signed into law.

The Maine State House passed a CWA-supported call center bill (L.D. 201) this week requiring companies with more than 100 workers (whether call centers or not) to give advance notice of closure and strengthen protections for workers. The Maine house sponsor, Rep. Michelle Dunphy, is a call center worker and CWA member. Up next is a Senate vote.