As many Americans with stagnant paychecks found that they were receiving smaller refunds on Tax Day and wondered if they would even have a job a year from now, massive corporations like AT&T ran away with billions of dollars in tax cuts, cut jobs, failed to provide promised wage increases, and continued to send jobs overseas.

Over the weekend, AT&T Midwest and Legacy T workers reached the one-year anniversary of their contract expiring and the company continues to stonewall workers at the bargaining table, while CWA members at AT&T Southeast are gearing up for the start of their own negotiations with the company this year. To put pressure on AT&T, CWAers across the country rallied to draw attention to our contract fight and to push Congress to hold corporations accountable for their broken tax cut promises.

Thousands of AT&T workers have already sent handwritten letters to their members of Congress demanding an investigation into what happened to the billions of dollars in tax breaks they gave away to AT&T and other corporations that keep cutting jobs. Send your letter now to demand an investigation: InvestigateATT.org 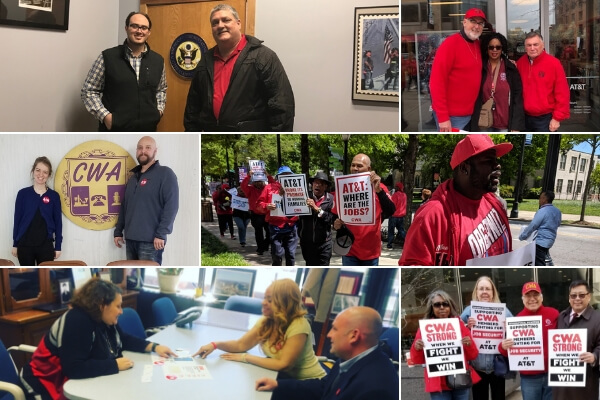 To put pressure on AT&T, CWAers across the country rallied to draw attention to our contract fight and to push Congress to hold corporations accountable for their broken tax cut promises.

To mark the first day of renewed bargaining on Wednesday, Envoy passenger service agents protested outside of DFW against poverty level wages. Envoy agents are calling on management to negotiate a fair contract, including wages that reflect the critical work they do supporting passengers and safe flights for Envoy’s parent company, American Airlines.

Last month, Envoy agents rejected a tentative proposed contract. While the tentative agreement included a pay increase, it fell short of providing family-supporting wages for all agents and did not allow agents to reach top pay until after their 14th year with the company. Starting pay at Envoy is $9.48 an hour, and more than half of the agents make less than $11 an hour. Many qualify for food stamps and other forms of public assistance.

“A fair wage is not the reality for thousands of Envoy-American Eagle workers struggling to make ends meet,” said Toby Lane, an Envoy agent at Springfield–Branson National Airport. “Enough is enough. Envoy must provide a living wage to the workers who have contributed greatly to the company’s success.”

To mark the first day of renewed bargaining, Envoy passenger service agents protested outside of DFW against poverty level wages.

CWA Local 1298 members kicked off their negotiations with Frontier Communications on Wednesday with a huge rally in New Haven to show support for the CWA bargaining committee.

Editorial staff of Quartz, a news outlet that covers technology, geopolitics, work, and culture, announced this week that an overwhelming majority of eligible staff has signed on to join the NewsGuild of New York/CWA Local 31003. Quartz staff have requested voluntary recognition from parent company Uzabase in order to swiftly begin the bargaining process. In their organizing statement, Quartz staff cited the desire to strengthen existing benefits and to improve such issues as pay equity, diversity, and job security through collective bargaining.

“We love Quartz, and we love working here,” said geopolitics reporter Annalisa Merelli. “For us, organizing is a way to double down on our commitment to the publication and the continued pursuit of its excellence. We are excited about the future of Quartz, and we want to make sure we are a part of it.”

On Saturday, outsourced workers from across Ohio gathered in Akron to testify at a field hearing about corporate job outsourcing and union busting co-sponsored by Cleveland Jobs With Justice and the Ohio Poor People’s Campaign with support from CWA and other unions and community groups.

Witnesses included several members of the Northeast Ohio Newspaper Guild/TNG-CWA Local 34001 who were affected by recent layoffs at The Plain Dealer, along with UAW workers from the recently-idled GM assembly plant in Lordstown.

The Plain Dealer in Cleveland recently cut a third of its union-represented reporting staff. In May, the paper’s management plans to outsource editing, design and layout jobs to the New York-based company Advance Local, which was created by Advance Publications (Newhouse Media), the owner of The Plain Dealer. Staff at the nearby Akron Beacon Journal, another publication that NewsGuild-CWA members work for, have also experienced deep cuts in recent years.

John Funk, former energy and utilities reporter at The Plain Dealer, who recently lost his job in a round of layoffs at the paper said, “The entire copy desk next month will be outsourced. Newhouse Newspapers threw us out of the newsroom and put us in the back with card tables, then threw us out completely.”

Janet Cho, who was laid off from The Plain Dealer along with one-third of the reporting staff in early April after 20 years at the paper, said, “At the time [I was hired], we had more than 400 people in the newsroom, it was just growing and bustling.” She described how those who endured the shrinking newsroom over the years took on more and more responsibilities as their colleagues left.

Grant Segall, who has worked at The Plain Dealer for 34 years, said, “It’s not just about us and our jobs, it’s also about the communities and the readers. It’s about holding public officials’ feet to the fire, and writing about what it’s like to be a union worker so everyone else knows what it’s all about.”

Ron Gay, a staff member from District 4, presented testimony on how CWA members and their communities have been affected by AT&T slashing jobs and shuttering call centers in Ohio and around the country. Nationwide, AT&T has eliminated over 12,000 jobs since the Tax Cuts and Jobs Act was passed, despite making promises about jobs investments and receiving a $21 billion tax cut.

CWAers across the country are making progress on passing legislation to protect call center jobs from offshoring! Here are the new updates on CWA members' hard work to pass state legislation: 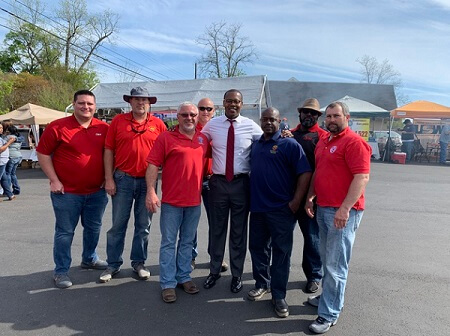 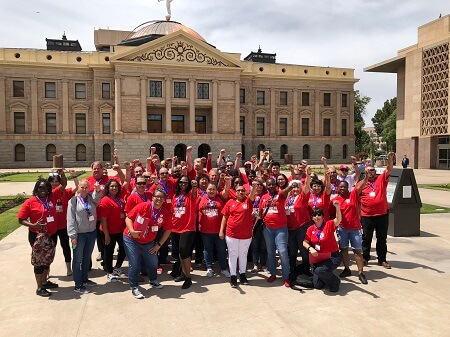 On Wednesday, 40 activists and officers from CWA Locals 7019, 7026 and 7050 attended the Arizona AFL-CIO’s Day of Action at the Capitol along with other unions. CWAers met with lawmakers to urge them to support HB 2530, CWA’s call center legislation.

This week, CWAers, along with other unions and allies, successfully beat back an attempt by state legislators to split the Colorado Public Utilities Commission (PUC) and diminish its authority.

Sandra Parker Murray, a member of CWA Local 7777 and a telecommunications worker for 22 years at AT&T, Lucent Technologies, and Avaya, testified before the Colorado Senate Transportation Committee on the need to restore the strength, autonomy, and authority to the PUC on telecommunications matters.

“Please take a stand to ensure that telecommunications functions for the common good, not solely corporate profits,” Parker Murray urged. “The PUC's oversight of telecom retail service rates, terms and conditions and service availability and quality was substantially reduced by the legislature in 2014. We want to see those powers restored to make a stronger PUC.”

CWA members still have a big fight in future legislative sessions to restore telecommunications authority to the PUC, but stopping the further weakening of the Commission this week was a major victory.

CWAers, along with several other public interest groups, delivered a petition to the FCC on Tuesday with more than 60,000 signatures opposing the potential T-Mobile/Sprint merger, saying that the merger would lead to lost jobs, higher prices for consumers, and less competition. The merger would particularly harm low-income consumers and communities of color.

“Many T-Mobile and Sprint workers have signed a petition expressing their concern about the jobs impact of this merger,” said Vice President of CWA Local 2222 Sharita Bryant of Northern Va. who is a wireless retail worker, at the petition delivery. “The merger will lead to the loss of 30,000 jobs, mostly at retail stores like the one I work at. The FCC should deny this merger as currently structured because it is bad for workers and bad for consumers.”

Meanwhile, the Wall Street Journal reported this week that the proposed merger is in doubt, saying T-Mobile and Sprint have been told by Justice Department staff that the merger is unlikely to be approved as currently structured. Dozens of members of Congress and several Democratic candidates for president have also registered their opposition to the deal. 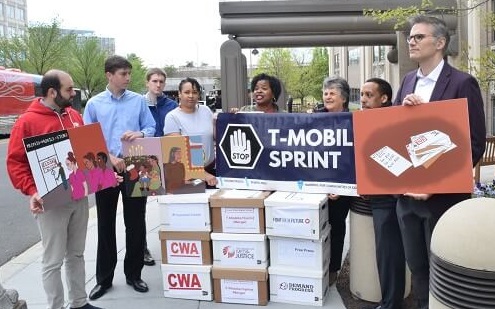 CWAers, along with several other public interest groups, delivered a petition to the FCC on Tuesday with more than 60,000 signatures opposing the potential T-Mobile/Sprint merger, saying that the merger would lead to lost jobs, higher prices for consumers, and less competition.

The Next Generation of CWA Leaders 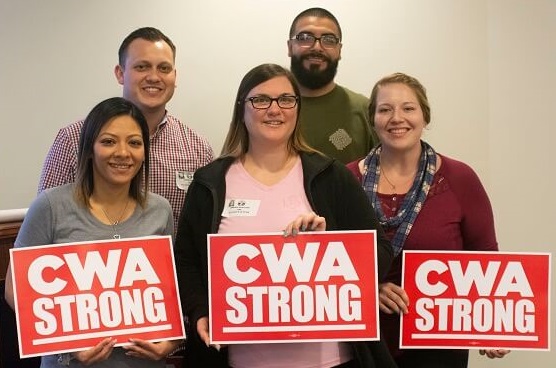 This month, five CWA Next Generation Lead Activists led a Reversing Runaway Inequality training at the CWA national headquarters. Participants from CWA and allied organizations, including SEIU and Working America learned about the fundamental causes of income inequality and how working people can fight back. Lead Activists then met with Telecommunications & Technologies Vice President Lisa Bolton, who leads the CWA Next Gen program, to develop a training curriculum for young CWA members. Leads will conduct trainings in several districts later this spring. To learn how to get involved with CWA NextGen, visit CWANextGen.org!

Leaders of the NewsGuild-CWA and Teamsters unions issued a call to Gannett shareholders this week to reject a “hopelessly conflicted” board takeover effort by vulture hedge fund Alden Global Capital, owner of Digital First Media newspapers. The unions represent thousands of employees at Gannett and DFM.

“We believe that hedge funds in general and Alden in particular have had a destructive impact on the news industry,” the unions’ letter stated. “They have slashed staff and sold real estate to extract cash from the news organizations without regard to the role news organizations play in communities.”

Alden, which owns the DFM chain of nearly 200 publications, has been called a “destroyer of newspapers” for its voracious pillaging of its papers’ staff, real estate and resources, with little to no reinvestment.

The full letter is on the SEC website here.