When the Republican corporate tax cut bill was being debated, AT&T CEO Randall Stephenson was happy to make big promises to the American people that if it passed, AT&T would create thousands of new jobs. But it turns out those promises were a scam – just like the corporate tax cut bill itself, a massive giveaway to corporations paid for by working families. 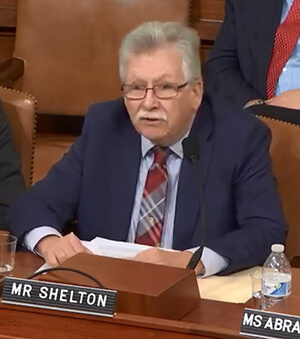 CWA President Chris Shelton testified on Wednesday before the U.S. House Ways and Means Committee at a hearing examining how the promises Republican leaders and corporations made on job creation and raising wages have not been fulfilled after the passage of the tax bill.

CWA President Chris Shelton testified on Wednesday before the U.S. House Ways and Means Committee at a hearing examining how the promises Republican leaders and corporations made on job creation and raising wages have not been fulfilled after the passage of the tax bill.

"One need look no further than our experience at AT&T for a prime example of how those promises have not become reality," Shelton told Congress. "AT&T CEO Randall Stephenson was one of the most visible and aggressive supporters of the corporate tax cuts. In his public statements in the media and to employees, he promised that AT&T would create at least 7,000 new jobs if the tax cuts were to become law. Instead, since December of 2017 when the tax law was passed by Congress and signed by the President, AT&T has eliminated 12,321 union jobs."

In advance of the hearing, CWA released a new analysis suggesting that after refunds, AT&T paid no cash income taxes in 2018 and slashed capital investments by $1.4 billion.

Shelton brought with him hundreds of hand-written letters that CWA members who work at AT&T had written to members of the Committee and read from some of them at the hearing. Representative Dan Kildee (D-Mich.) noted that he had met with CWA members in Flint, Mich., and received thousands of letters. "Unless the focus is on how we strengthen the American worker, and not how we reward those people at the top who are already doing quite well, we are going to see more [layoffs]. This Tax Cuts and Jobs Act was a jobs cut and tax act." Kildee said.

Shelton pointed out that AT&T is not the only employer that has not shared the benefits of its tax windfall with its employees, citing General Motors, American Airlines, and Wells Fargo as other corporations benefiting from tax cuts while under-investing in employees and cutting jobs. He urged Congress to call for AT&T CEO Randall Stephenson and other corporate executives to testify and explain exactly what they did with their tax windfall and what is really behind the job cuts.

Since the passage of the Republican corporate tax cut bill, companies like AT&T have failed to raise wages for their employees, and have instead funneled their massive profits from the tax bill into stock buybacks that only benefit executives and large shareholders. 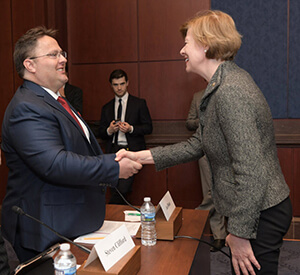 U.S. Senator Tammy Baldwin (right) hosted a hearing on Tuesday to highlight the effects of these harmful corporate stock buybacks. At the hearing, CWA Local 4621 President Joe Olson (left) told Senators how AT&T has been laying off thousands of workers and keeping wages stagnant while pumping money into stock buybacks.

U.S. Senator Tammy Baldwin (D-Wis.) hosted a hearing on Tuesday to highlight the effects of these harmful corporate stock buybacks. At the hearing, CWA Local 4621 President Joe Olson of Appleton, Wis., told Senators how AT&T has been laying off thousands of workers and keeping wages stagnant while pumping money into stock buybacks.

"This Thursday, AT&T will be closing its call center in Appleton, putting over 20 of my colleagues out of work," Olson said. "This call center has been shrinking for years now, as there were almost 400 workers at the call center just a decade ago. You can imagine what the loss of 400 good jobs has done to a pretty small community like Appleton."

Olson pointed out to the Senators that last year, AT&T conducted $609 million in stock buybacks, which alone could have funded 6,625 jobs. Meanwhile, AT&T has cut more than 12,000 jobs across the country over the last year.

"For too long, corporate executives like those at AT&T have decided to prioritize making their short-term share price as high as possible instead of helping the workers who are the backbone of the company. I urge Congress to stop these malicious stock buybacks and help create jobs to benefit communities like mine," Olson said.

CWA members are supporting Sen. Baldwin's bill, the Reward Work Act, to rein in corporate stock buybacks and empower workers to have a say in how their company's profits are spent.

With AT&T unwilling to reach a fair agreement at the bargaining table, CWA members at AT&T Mobility in Puerto Rico are asking the public to join them in their fight by signing a new petition urging the company to settle a fair contract that offers improvements and makes workers' lives better and more secure.

The petition highlights how AT&T Mobility workers in Puerto Rico are making less than their coworkers in the mainland United States, and their fight for more affordable healthcare and retirement security, as well as job security protections to stop the company from sending their work to other countries.

Show your support by signing the petition, which you can find by clicking here for English, or here for Español. 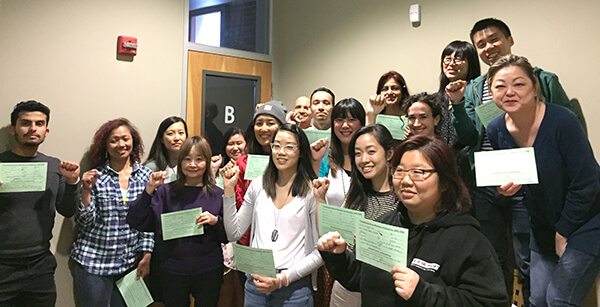 A member of the News Media Guild/TNG-CWA Local 31222 has successfully petitioned the Associated Press to update its Stylebook entry on so-called "right-to-work" laws to ensure that reporting on these laws accurately conveys the meaning of the anti-worker term.

"'Right-to-work' is a loaded and inaccurate phrase," News Media Guild Vice President and AP journalist Mike Warren wrote. "By endorsing the use of right-to-work without quote marks, the AP is adopting a public relations device created in opposition to the labor movement."

The Stylebook editors updated the "right-to-work" entry to recommend that the phrase be used in direct quotes or with quote marks for the purpose of explaining the term, and advises, "Avoid using this non-neutral phrase generically and without definition since employees covered by union contracts can freely work with or without such laws."

The change not only affects the way this phrase is used by AP, but will also apply to the many publications that subscribe to the AP and use the Stylebook to govern their usage. 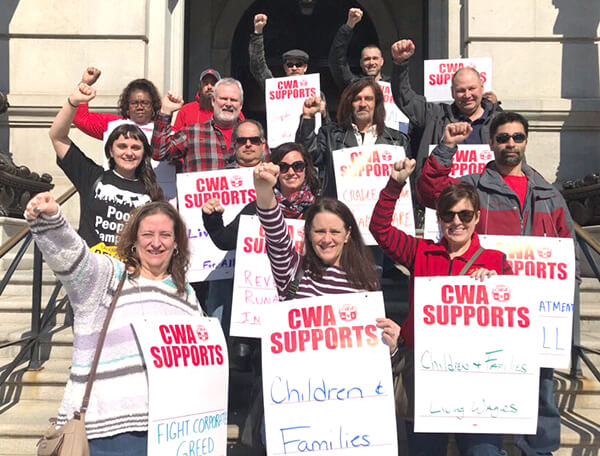 CWA members from Locals 13000 and 13500 gathered in Harrisburg for a Reversing Runaway Inequality training last week. In addition to learning about ways to level the economic playing field, participants joined an action at the Pennsylvania State Capitol as part of the recent renewal of Martin Luther King, Jr.'s Poor People's Campaign to fight back against the structures that are supporting economic injustice and undermining our democracy.

CWA Tells Congress to Send Negotiators Back to the Table on NAFTA 2.0 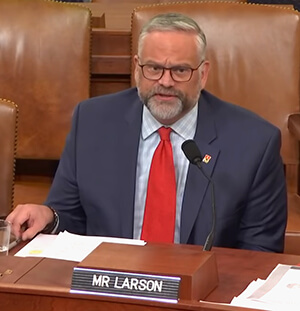 At a hearing before the Trade subcommittee of the U.S. House Ways & Means Committee, CWA's Director of Legislation, Politics, and International Affairs Shane Larson testified on how the Trump Administration's NAFTA 2.0 falls short for working families.

At a hearing on Tuesday before the Trade subcommittee of the U.S. House Ways & Means Committee, CWA's Director of Legislation, Politics, and International Affairs Shane Larson testified on how the Trump Administration's NAFTA 2.0 falls short for working families.

"The simple fact is that the current draft of NAFTA 2.0 doesn't fix NAFTA's problems, and makes some even worse," Larson said. "Congress must send negotiators back to the table to resolve some of the most egregious problems with this agreement."

Larson said that from the beginning of the renegotiation process, CWA asked for language to be included to keep good call center jobs in the United States, but the language has not been added to the agreement. "The offshoring of call center jobs raises risks for consumer data and puts downward pressure on standards in the U.S.," he said.

Larson also stressed the importance of having a way to enforce labor laws in the agreement. "We need an enforcement mechanism that works, moves in a timely way, contains real penalties for violators, and is not left to the sole discretion of parties who have demonstrated at length that labor rights enforcement is not a priority for them."