All UPTE-CWA members at University of California will go on strike for 24 hours, beginning at 4 a.m. on March 20th. UPTE-CWA Research and Technical members are striking for a fair contract, and UPTE-CWA Healthcare and AFSCME workers will strike in solidarity. More than 40,000 University of California employees will be on strike across UC campuses and medical centers in the largest strike of 2019. 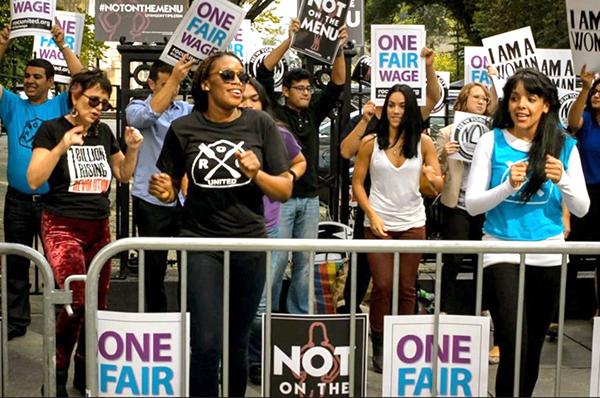 Members of The NewsGuild of Philadelphia-CWA have overwhelmingly ratified a new three-year agreement with Restaurant Opportunities Centers United, an organization that trains and educates restaurant workers and lobbies for worker-friendly laws in major cities across the country. Highlights of the agreement that covers workers from Philadelphia, New York, Washington, Los Angeles, Chicago, and Oakland include pay increases, continued fully paid health care by the employer; nine personal days and 11 paid holidays; and more improvements.

CWAers across the country are making progress on passing legislation to protect call center jobs from offshoring! Here are this week's updates on CWA members' hard work to pass state legislation:

Thanks to years of tireless work by CWA members who made phone calls, sent postcards, met with legislators in Albany, held rallies, and much more, the New York State Senate voted this week by an incredible 58 to 3 count to pass the New York State Call Center Jobs Act to protect call center workers!

The bill would require call center employers to notify the Department of Labor if they intend to relocate at least 30% of call volume in a year. Those companies would lose all grants, loans, tax benefits, and state contracts. The bill would also ensure that all state business-related call center work is performed by New York State companies.

Next, the New York Assembly must pass the call center legislation and send it to the governor's desk. 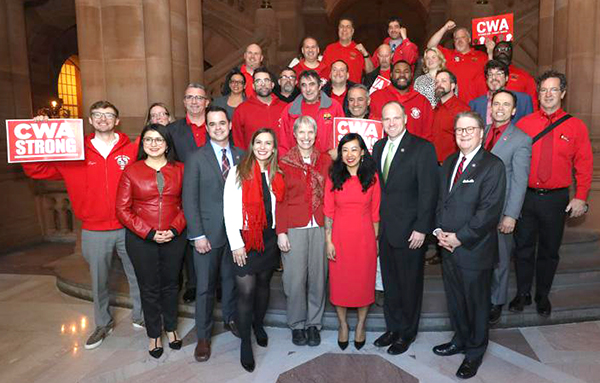 In the wake of a recent announcement by Conduit Global, which received $2 million in Tennessee state grants in 2014, that the company is laying off 112 call center employees from its call center in Cordova, CWA members' efforts to pass legislation to protect call center jobs are drawing local media attention.

"Our tax dollars are going to these companies to bring jobs here and they're keeping the money and then shipping the work out of the country," Misty Robertson, CWA's Tennessee legislative and political coordinator, told Fox13 Memphis.

Front line bank workers, members of the Committee for Better Banks, a CWA project, gathered in Washington, D.C., this week as Wells Fargo CEO Tim Sloan was called in to testify in front of the House Financial Services Committee. Bank workers, joined by Senator Sherrod Brown (D-Ohio), Rep. Chuy Garcia (D-Ill.), and other allies, held a rally ahead of the hearing to deliver 15,000 signed petitions calling on Sloan to meet with the Committee for Better Banks to address the toxic, high-pressure sales culture that originally led to the Wells Fargo fake account scandal.

At the rally, the bank workers warned that the toxic sales culture hasn't improved since the Wells Fargo scandal.

"If Wells Fargo truly cared about its workers, it would show in their investment in us. If they are willing to show their commitment, they need to start doing better for workers and meeting with the Committee for Better Banks," said Alex Ross, a Wells Fargo employee in Minneapolis.

"Front line bank workers having an independent voice and the ability to speak out is one of the best mechanisms we have to rein in the power of Wall Street," said CWA President Chris Shelton at the rally. "When front line bank workers have a voice on the job, they can improve their working conditions and feel secure to speak up about sales goals that force them to push predatory products on our communities."

The bank workers' efforts to hold Wells Fargo accountable drew the attention of national media. At the hearing, Sloan was grilled about a New York Times story published ahead of the hearing featuring concerns from CBB members. Meggan Halvorson, a CBB member who works at Wells Fargo in Minneapolis, was featured in a segment on the hearings on the CBS Evening News.

Members of the Committee for Better Banks met with Members of Congress including Reps. Cindy Axne (D-Iowa), Rashida Tlaib (D-Mich.), and Dean Phillips (D-Minn.) to share their stories and concerns. 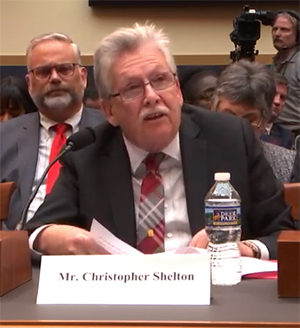 CWA President Chris Shelton testified in front of Congress on Tuesday at a U.S. House Judiciary Antitrust Subcommittee hearing on the T-Mobile/Sprint merger. At the hearing, Shelton warned that the proposed merger will harm thousands of workers and consumers.

"This merger would kill American jobs," said Shelton. "We estimate that 30,000 Americans would lose their jobs if this merger is approved. The Wall Street firm, MoffetNathanson, estimates this merger would kill 20,000 jobs. Whether you take their number or ours, you should understand that T-Mobile's job creation promises are sheer fantasy."

"CWA members are proud to support H.R.1, the For the People Act, a bold step toward fixing our democracy," said CWA President Chris Shelton. "Corporate CEOs and the wealthiest 1% have spent decades rigging the political process against working people by making it harder for them to vote, stacking the courts with activist judges who have allowed our elections to be flooded with massive amounts of unreported corporate money, and weakening ethics rules. It's time to fundamentally reform our political system by passing the For the People Act."

Next, CWAers will be pushing for the For the People Act to get a full debate and vote in the Senate. 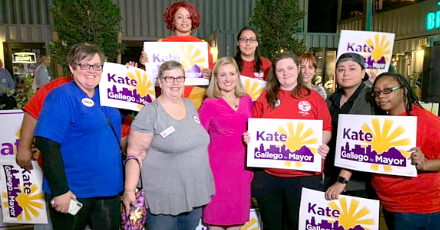 On Tuesday, CWA-endorsed candidate Kate Gallego was elected as the next Mayor of Phoenix in a runoff election! A group of Arizona CWAers recently completed the first phase of CWA's Political Activist Training and went all-out to elect Gallego. Members of CWA's AZ Retired Members Council chapters also played a critical role in the campaign.

One of the most outrageous loopholes in our tax code is the "carried interest" loophole, which allows hedge fund and private equity fund managers to claim part of what is really salary income as capital gains instead. As a result, they pay about 20% in taxes – a lower rate than that paid by millions of middle-class workers like teachers, firefighters, nurses, and customer service workers.

"For years, the carried interest tax loophole has allowed some of the wealthiest people in this country to pay a lower tax rate than millions of middle-income workers," said CWA President Chris Shelton. "Meanwhile, our country's infrastructure is crumbling, our young people struggle to pay college tuition, and critical programs like Social Security and Medicare are constantly under threat. It's time to close the carried interest loophole and make Wall Street pay its fair share."

The NewsGuild-CWA and NABET-CWA are renewing support for the Journalist Protection Act, introduced this week in the Senate by Sens. Richard Blumenthal (D-Conn.) and Robert Menendez (D-N.J.), and in the House by Rep. Eric Swalwell (D-Calif.). The legislation was originally filed in 2018.

The bill would make it a federal crime to intentionally cause bodily injury to a journalist engaged in reporting news, or with the intention of intimidating the journalist or impeding news gathering. The term "Journalist" would include reporters, producers, news gathering crews, and photographers. The bill calls for punishment of up to six years in prison for convicted offenders.

"Now more than ever, our industry needs the Journalist Protection Act to ensure both our members and their equipment have an extra layer of defense from attacks," said Charlie Braico, president of NABET-CWA. "It's also another way of saying in these turbulent times that yes, the First Amendment matters – and it's worth protecting."