It’s never too early to mobilize! As contract negotiations with AT&T Southeast approach later this year, the CWA bargaining committee held a town hall conference call with CWA members across CWA District 3 to introduce the bargaining team members, provide an update on bargaining strategies, and to talk about ways to mobilize. 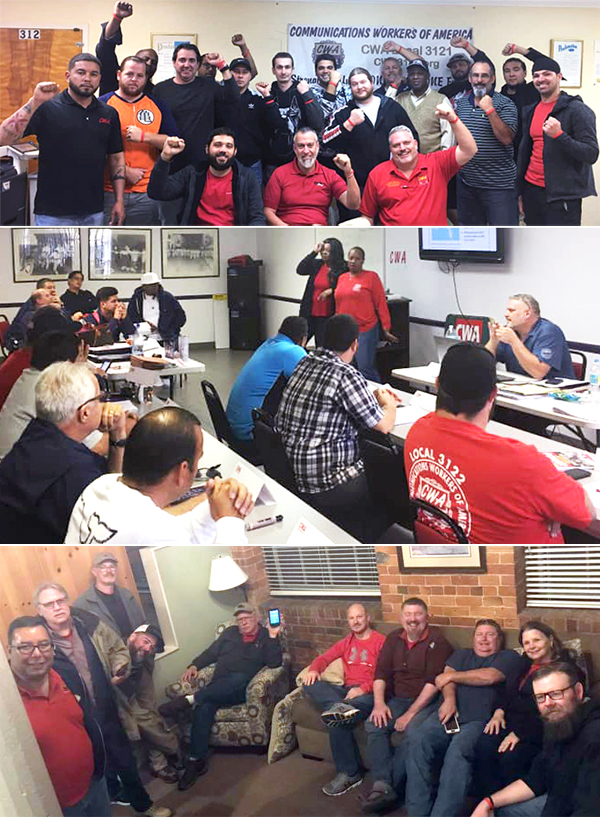 CWA members from Locals 3120 and 3121 (top), and 3122 (middle), participated in mobilization trainings as they prepare to show AT&T Southeast that they are ready to fight for a fair contract. Local Presidents who represent AT&T Southeast members in North Carolina gathered to listen to the town hall call (bottom).

The AT&T Midwest bargaining team returned to the bargaining table this week in an attempt to restart meaningful negotiations. They will continue to push AT&T to commit to servicing the customers of the Midwest region with reliable market-leading communications services as they have for decades using CWA members covered by the Midwest Agreement.

The bargaining team is urging members to write a short letter to their members of Congress ask them to investigate what AT&T has done with its tax break windfall since the company is clearly not keeping its promise to using the money to create jobs and keep good jobs in the communities they serve. You can find more information on the letter writing campaign at www.GoodJobsATT.org/CongressLetter.

A New CWA Steward Training is in the Works!

AT&T and Cricket Wireless members from CWA Locals 7708, 7750, and 7777 gathered in Denver, Colo., last week for the pilot of a new CWA STRONG Steward Training program. The pilot was developed by a group of CWA staff appointed by every district and sector, who reviewed and modified the existing Steward Training. The new program is designed to give CWA stewards comprehensive training on how best to represent their coworkers as unions face anti-worker attacks from corporate special interests and from institutions like the President Trump-controlled NLRB.

In the training, stewards discussed ways to take every opportunity to mobilize and engage their members. The pilot program will continue in various cities, in an effort to seek input from CWA stewards and staff across the country from different bargaining units and levels of steward experience. After the pilot program has been completed and the training material has been finalized, it will be used to train local leadership and encourage a systematic approach to covering both new and existing stewards. 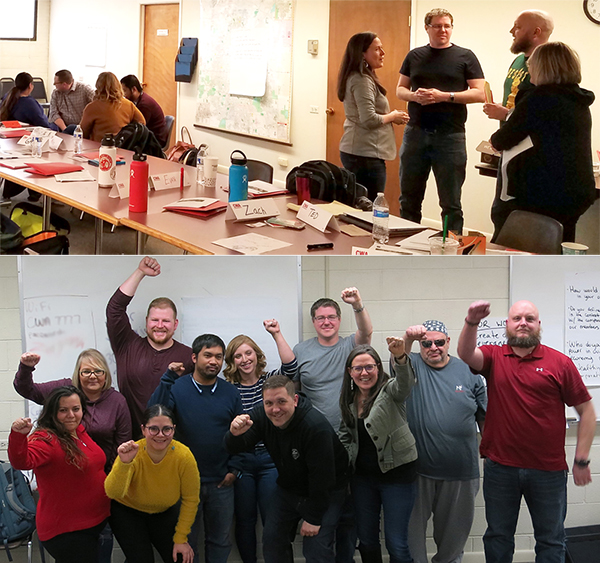 AT&T and Cricket Wireless members from Locals 7708, 7750 and 7777, gathered in Denver, Colo., last week for the pilot of a new CWA STRONG Steward Training program.

CWA Members Fight to Save our Democracy 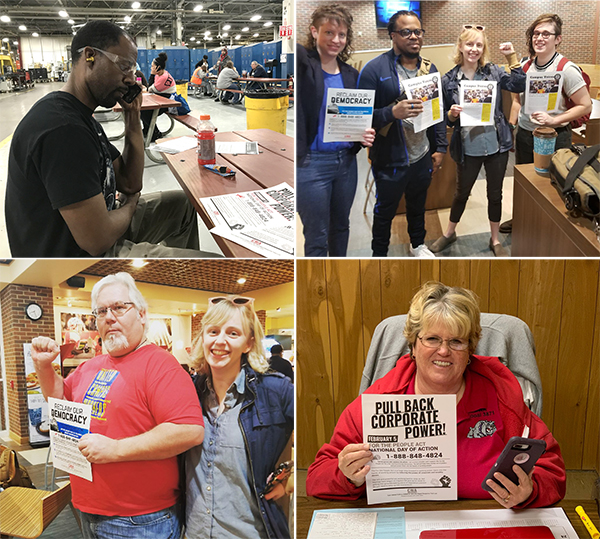 CWA members across the country made nearly 1000 calls this week as part of a Day of Action to pass the For the People Act. Ohio members led the way with more than 150 calls. The reforms in the bill include expanding voting rights, reducing the influence of big donors on our political system, fairer redistricting, and government ethics reforms. It's not too late to add your voice! Call 1-888-894-6720 to ask your member of Congress to stand up for our democracy.

After going public with their union drive on December 12, NewsGuild staff and organizing committee members engaged in several weeks of negotiations over the scope of the union's bargaining unit. Attorneys representing management were adamant that nearly two dozen employees be excluded from the unit based on their alleged status as managers or supervisors, which the Guild rejected. After pushing for and winning the Guild's proposed unit, the organizing committee came to an agreement with management over voluntary recognition of the union.

"We are proud to announce that New York Media has recognized the New York Magazine Union, which is supported by an overwhelming majority of the editorial staff," said the organizing committee in a statement. "After weeks of negotiations, we fought for, and won, a unit that includes all of our eligible editorial colleagues. Now that our union is official, we are very excited to begin the next steps of this process and move on to collective bargaining." 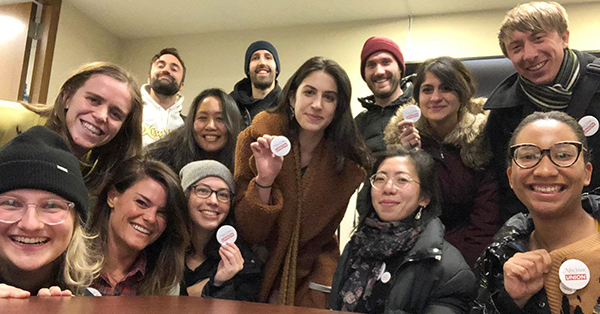 CWA AT&T Mobility Brigade members from Arizona, California, and Washington held an organizing blitz this week in the Phoenix area. They signed up new members at AT&T Mobility retail stores and at the Mesa call center. They also gathered organizing leads at Verizon Wireless and T-Mobile, encouraged members to contribute to the CWA Political Action Fund (PAF), and identified more potential stewards.

Members of CWA Local 3010 in Puerto Rico rallied outside of the 911 Government Facility in San Juan to demand an end to the diversion of 911 funds and the austerity measures that have reduced their pay and benefits for the past few years. Since 2014, 911 employees including members of the local have seen their pay frozen and their benefits reduced. Now an exodus of 911 dispatchers threatens the security of the public.

"Since 2014, the government of Puerto Rico has diverted 911 funds to use them for non-emergency-related expenses. This is not only highly illegal, but has also created a crisis in the dispatching service. We have the funds, we have the resources, but the government has decided not to invest in their 911," said CWA Local 3010 Executive Vice President Aramis Cruz. "The average handling time of our emergency calls has doubled since last year and we don't have the resources where we need them. We will keep fighting and will take the fights to the streets and to court to stop the diversion of funds." 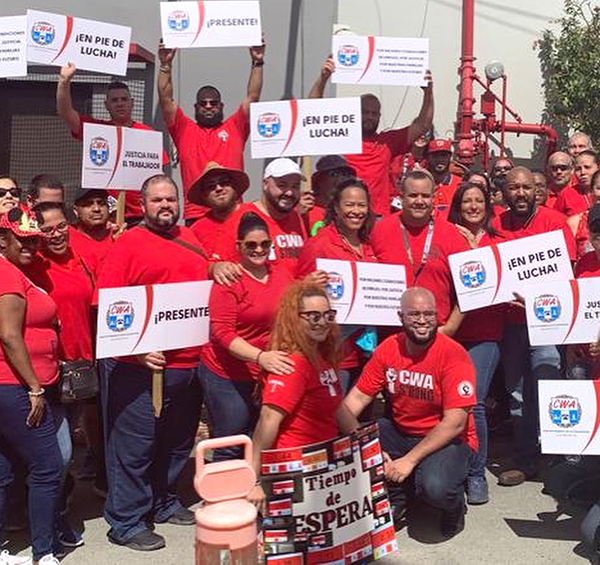 Members of CWA Local 3010 in Puerto Rico rallied outside of the 911 Government Facility in San Juan to demand an end to the diversion of 911 funds and the austerity measures that have reduced their pay and benefits for the past few years.

CWA District 2-13 trainers Jennifer Szpara from Local 13500 and Justin Tapia from Local 2106 led a Reversing Runaway Inequality training in Philadelphia last week for members of three locals across Pennsylvania. Participants in the training learned about the causes of the rapidly growing wealth gap in the United States and what can be done to address it. They also and took action to advance the For The People Act, which contains reforms essential to fixing our political system. CWA District 2-13 Vice President Ed Mooney and CWA Local 13000 president Jim Gardler also spoke to activists at the training.