Could the T-Mobile-Sprint Merger Drive Down Wages at Verizon and AT&T?

Could the proposed merger of T-Mobile and Sprint drive down wages across the entire wireless industry – including Verizon and AT&T?

On Monday, the Economic Policy Institute (EPI) released groundbreaking new research quantifying the effects of the proposed merger on the wages of retail wireless workers. Their analysis finds that weekly earnings for wireless workers across the industry could decline by about $3,276 per year as a result of the merger.

At an event in Washington, D.C., unveiling the new report, Vanessa Villalta, a retail sales representative at a T-Mobile retail store in Houston, Texas, explained how many of her coworkers move from one wireless company to another when they are seeking better job opportunities, and how the T-Mobile/Sprint merger depressing the wages of workers could spread throughout the industry.

CWA is calling for the proposed merger to be blocked unless T-Mobile commits to regulators that it will not lay off employees as a result of the merger and will agree to respect workers' legal right to have a union on the job.

Vanessa Villalta, a retail sales representative at a T-Mobile retail store in Houston, Texas, spoke about how the T-Mobile-Sprint merger depressing the wages of workers could spread throughout the industry.

This holiday season, Envoy passenger service agents have been making sure passengers know about their fight for a fair contract with family-supporting wages by distributing flyers asking passengers to donate to their local food banks. With Envoy agents being paid as little as $9.48 an hour, many of them rely on food banks to put food on the table.

"I am not writing to urge you to donate to the food banks," Shelton wrote to Parker. "You have the power to provide a far better and lasting solution beyond the holiday season. I urge you to use your authority to finally reach a contract at the Envoy bargaining table with living wages for all your Envoy employees."

The next bargaining session is set for January 22.

CWA is calling on Congress to investigate how AT&T and other major corporations are spending the enormous tax cut benefits they received from the 2018 tax bill. CWA President Chris Shelton sent a letter this week to incoming Chair of the Ways and Means Committee Congressman Richard Neal (D-Mass.), urging him to hold hearings on why companies like AT&T continue to cut jobs despite the promises they made in order to get the tax bill passed.

CWA President Chris Shelton writes in the letter, "I write in full support of your promise to hold hearings on the $1.5 trillion tax cut forced through last year. CWA respectfully requests that your hearings and oversight efforts include an investigation into what major corporations such as AT&T are doing with their windfall from the tax cuts, following unfulfilled promises to American workers on wages and jobs."

Before the Republican tax bill passed, AT&T CEO Randall Stephenson pledged $1 billion in tax savings toward creating "7,000 good jobs for the middle class." Instead, ongoing layoffs, including a new round of call center closures in the Midwest announced last week, have compounded workers' concerns about the company's practice of shifting work to low-wage overseas contractors, which many believe is hurting the quality of service and damaging AT&T's brand.

Shelton joined CWA District 4 Vice President Linda L. Hinton, Telecommunications & Technologies Vice President Lisa Bolton, and the Bargaining Chairs of the two committees on a town hall call this week to answer member questions, and to talk about ways for members to mobilize for a fair contract in 2019.

Employees at the Casper Star-Tribune, a daily newspaper in Wyoming, have ratified their first collective bargaining agreement with Lee Enterprises after eight months of negotiations. The agreement guarantees raises for the entire unit this year and next year, sets a minimum salary, and provides improvements in severance, layoff provisions, overtime requirements, and more.

Workers organized to preserve the integrity of their media outlets and to have a voice to ensure that Ziff Davis maintain a clear and effective separation between the editorial and commerce units of its business.

Minnesota CWAers, along with a coalition of environmental and social justice groups, celebrated a big victory on Monday when the Metropolitan Council announced a new plan to add electric buses to the Metro Transit bus fleet, with the goal of no longer purchasing diesel buses by 2022. CWA members and allies have been putting pressure on the Met Council to take action to move towards clean buses. 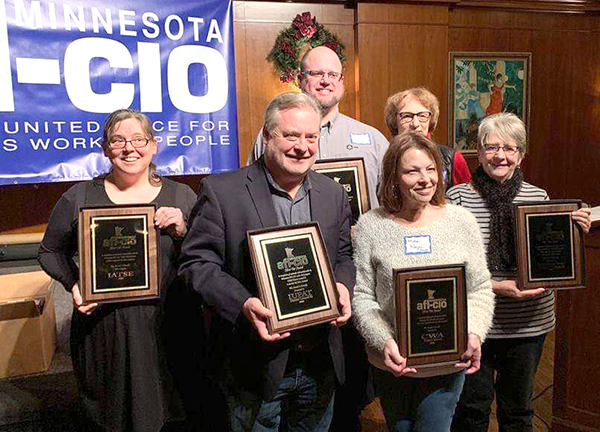 Minnesota CWA LPAT coordinator Mona Meyer has been recognized as an Outstanding Labor Leader by both the Minneapolis and St. Paul Regional Labor Federations for her leadership in the Minnesota Labor Movement. CWA exceeded its member participation goals during the midterm election, had the most volunteers in a Regional Labor Federation, and accomplished the highest number of volunteer shifts in the state.

NLRB Rules in Favor of NewsGuild

Etchingham ordered the company to rescind the access ban (which it already has) and post a notice announcing the ruling, physically and electronically, for 60 days.

CWAers Stand with XPO Workers to Call for Change

This week, CWA members across the country stood in solidarity with workers at XPO, joining actions with the Teamsters at Verizon stores in more than 10 cities around the country. Workers and allies are calling for immediate action by Verizon and XPO to address the problems in Memphis and throughout XPO's operations, and to demand that Verizon clean up its supply chain.

CWA members across the country stood in solidarity with workers at XPO, joining actions with the Teamsters at Verizon stores in more than 10 cities around the country.