CWAers across the country won major victories for working families on Election Day, electing strong, pro-worker candidates who will change the face of Congress, state houses, and hundreds of local and municipal offices from coast-to-coast, and passing ballot measures that will increase wages and strengthen our democracy. CWA members and retirees led a sophisticated political program and a year-long effort to highlight the failed promises of the Republican corporate tax cut bill that made the difference in some of the most competitive races of the 2018 midterm election.

"This election represents a beginning, not an end," said CWA President Chris Shelton. "CWA members are ready to make sure that a progressive pro-worker agenda that puts the needs of working families ahead of corporate CEOs and Wall Street bankers is at the center of the discussion in Congress, in state capitals, and in communities across the country."

Informed by deep experience organizing in some of the toughest right-to-work states, CWA's program went beyond traditional party politics. Trained CWA activists engaged in issues-based electoral work to build the power that is necessary to change our economy and strengthen our democracy. They set up canvasses, managed phone banks, and used new peer-to-peer texting platforms to reach out to CWA members, retirees, and the general public during this election cycle.

Check out this video from CWA's political program highlighting the accomplishments of CWA members and retirees in the midterm elections. 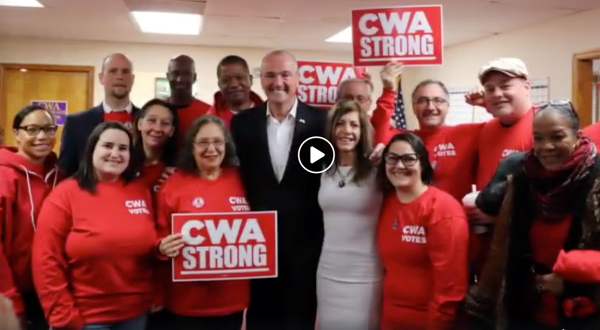 Piedmont Airlines passenger service agents ratified a new five-year contract last week. The agreement covers 6,000 agents in 28 states at the American Airlines subsidiary, and provides significant improvements in the collective bargaining agreement, including wage increases across the board and new defined pay scales.

"I'm proud of our bargaining team and our members who were determined to fight for improvements at American Airlines," said Richard Honeycutt, Vice President of CWA District 3 and Chair of CWA's Passenger Service Airline Council. "We must build on our progress and strengthen our union so that the company treats passenger service agents with the respect they deserve."

"I understand Nokia has made it clear to CWA that all U.S. work that supports the installation of telecommunications lines including that in Ohio, will be contracted out by Nokia and U.S. Nokia employees in those jobs will be laid off," Brown wrote, laying out concerns that Nokia's use of foreign-based contractors could affect national security.

"I am also troubled that the company has reportedly demanded CWA agree jobs will be cut before collective bargaining on other issues can advance. This is simply not how collective bargaining works, and it is not reasonable to expect the union to agree to job losses before other issues can be discussed. I object to these anti-worker tactics, particularly given that these highly-skilled workers in Ohio and across the country have been so critical to Nokia's operations."

Brown requested a response to his letter by November 15 providing details on Nokia's outsourcing, and outlining Nokia's efforts to continue to employ good-paying, high-skilled CWA workers.

The bargaining committee is asking members and retirees to continue to spread the word encouraging as many people as possible to send an online letter to Nokia CEO Rajeev Suri and Nokia Bargaining Chair Steve Muscat urging Nokia not to eliminate American jobs and benefits, and to bargain in good faith with the union for a fair deal.

The CWA bargaining team reached a Tentative Agreement with Windstream covering workers in Pennsylvania, successfully pushing back against the company's demand for givebacks.

The agreement includes wage increases as well as improvements to vacation, meal allowance, scheduling, and much more.

On Monday, United Airlines announced it will reduce service by pre-plating meals on the ground and eliminating a Flight Attendant position on certain international flights beginning February 2019, to "align" with staffing levels at American and Delta.

Reduced staffing means fewer Flight Attendants to respond to medical emergencies, resolve issues at boarding, de-escalate conflict between passengers, back each other up with aggressive passengers, maintain a safe space for everyone, and follow through on addressing any issues of sexual assault or hostile situations. It also means reduced ability to provide good customer service.

"Senior airline management has made a promise to Wall Street investors to keep costs low," said President of United AFA-CWA Master Executive Council Ken Diaz. "They are using reductions in staffing and services as the way to reach their bottom line initiatives."

This issue goes beyond United. "Staffing cuts started during airline bankruptcies. While airline profits have rebounded, staffing cuts keep getting deeper. Our union is totally opposed to staffing cuts and in fact our position is that safety and service require increasing Flight Attendant staffing," said Sara Nelson, AFA-CWA International President. "AFA-CWA will fight this with a coalition of Flight Attendants, airline passengers, other unions, and lawmakers." Members will wear their AFA-CWA pins and participate in solidarity actions.

"It is time to band together to out the real reason for diminished service: short-term gain for Wall Street with billions in stock buybacks funded on our backs," said Diaz. "We are an airline, not a hedge fund. Time to focus on our passengers with realistic Flight Attendant staffing and investment in the people who make our airline fly."