The U.S. Supreme Court this week ruled 5-4 in Janus vs. AFSCME to side with corporate special interests and harm the ability of public sector workers to collectively bargain.

Today's Supreme Court decision on the Janus v. AFSCME case marks a sad day for all working people. This decision continues a long campaign by corporate interests and right wing groups to restrict our ability to stand together. While these special interest groups might be celebrating their victory against workers' freedom to join together in strong unions to speak up for themselves, their families, and their communities, union members will be using this as a rallying cry to fight back harder than ever before.

The right-wing attack on union fair share fees is all about making it more difficult for working people to defend themselves when corporations abuse their power. Today's decision is an attempt to further concentrate power in the hands of the wealthy few by taking away resources from working people who are represented by unions.

But there's something happening here in America. We've seen it from CWA members as workers at Verizon, AT&T Mobility, Frontier Communications, and Momentive Performance Materials have gone on strike and won gains through strong collective bargaining. Our public worker membership is growing, even in states like Texas that prohibit collective bargaining for public employees. We've stood in solidarity with teachers and other public employees in many different states, walking out and standing up to special interests – and winning.

Corporate special interest groups have been working for decades to strip away workers' freedom to join together and negotiate for fair wages and benefits, and to improve our workplaces. They want to turn back the clock on achievements like Social Security, civil rights, wage and hour and safety laws, Medicare, and public education that unions fight every day to preserve.

Union members will show them that nothing can stand in the way of working people standing together. We call on elected officials at the local, state, and national level to stand with working people and make it easier for them to join together in unions.

Get all of CWA's information and materials on Janus here. 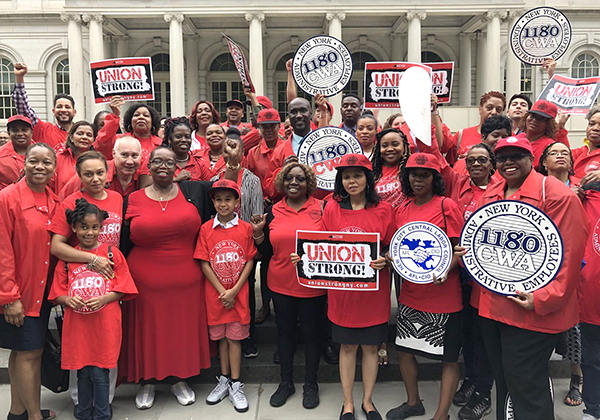 CWA members from Local 1180 rallied on the steps of New York City Hall on Janus decision day to show corporate special interests that nothing can stand in the way of working people standing together.

Shelton pointed out that workers have not seen their wages go up, and that the massive corporate tax cut profits have mostly gone into stock buybacks that benefit wealthy executives.

Shelton talked about how employers promised that they would use tax bill profits to bring back jobs from overseas, but instead, the tax bill actually contained provisions that created incentives for companies to offshore jobs.

"Workers are feeling quite left out because they were promised certain things with the tax cut by not only the president but Ryan, McConnell, and employers. It's just not happening," Shelton said.

CWAers in Colorado's 6th Congressional District are out in full force knocking on more than 6,000 doors for a four-week canvass focused on talking to voters about the Republican corporate tax cut bill, and gathering pledges not to vote for the incumbent Rep. Mike Coffman (R-Colo.), who supported the bill, in November.

To get the tax cut bill passed, corporations made big promises to create new jobs and raise wages. Instead, they've funneled those tax bill profits into massive stock buybacks that only enrich wealthy executives while their workers' wages remain stagnant.

As we see big corporations fail to live up to the promises they made, CWA members are making sure voters remember that Rep. Coffman voted for the enormous giveaway to Wall Street paid for by working families, and the best way to do that is to talk to their neighbors one-on-one.

CWAers had conversations with voters at the doors about how the tax plan is only benefiting corporations; how Wall Street Banks, like Wells Fargo – the same Wall Street banks that discriminate against people of color – got the biggest tax cuts; and how Rep. Coffman received huge political contributions from Wall Street. 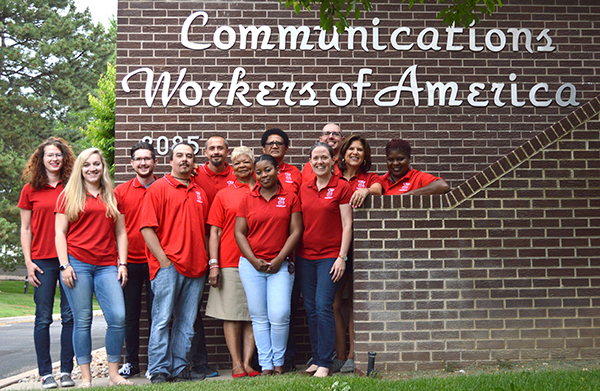 CWAers in Colorado's 6th Congressional District have been out in full force knocking on more than 6,000 doors for a four-week canvass focused on talking to voters about how the GOP tax cut bill has only enriched corporations and big banks – not working families.

The New Jersey State Legislature is ready to shut down state government on Sunday, and CWA members are mobilizing to stop it. The legislature's refusal to negotiate will lead to state workers being locked out of work for a second year in a row if there is no agreement by June 30 at midnight.

After eight years of Governor Chris Christie, New Jersey needs to rebuild services. Governor Phil Murphy has introduced a budget to do just that. Instead of relying on budget gimmicks and one-shots, Murphy wants to invest in our communities by ensuring millionaires pay their fair share and by closing corporate loopholes.

But some New Jersey legislative leaders want to shut down state government or make even more health care and pension cuts to public workers before raising taxes on millionaires. New Jersey needs sustainable, new revenue – not one-shots or cuts that balance the budget on the backs of public workers.

Learn more about how you can fight back here. 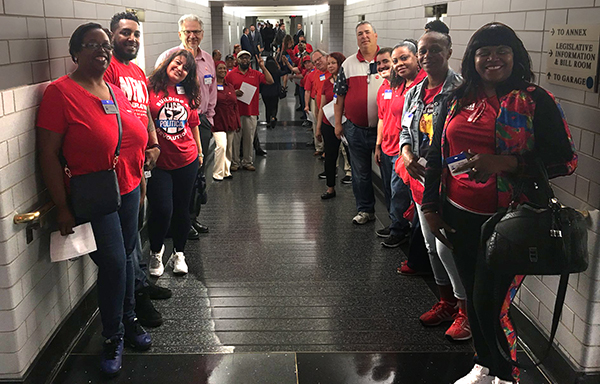 New Jersey CWA members have been hard at work at the Statehouse urging legislators to support Governor Murphy's budget.

As Sprint and T-Mobile faced questions on a potential merger from lawmakers on Capitol Hill on Wednesday, new CWA analysis shows that the merger could cause a massive job loss of more than 30,000 jobs across the country. To avoid this outcome, CWA is calling on Sprint and T-Mobile to make a binding commitment not to eliminate jobs in their proposed merger, and to stop violating federal labor laws and fully respect workers' rights.

If T-Mobile and Sprint are not willing to address these issues, CWA will not be able to support the approval of the T-Mobile-Sprint merger.

CWA, NABET-CWA, and the NewsGuild-CWA filed a petition this week with the FCC to deny the potential merger between Sinclair Broadcast Group and Tribune Media Company, saying that the merger does not serve the public interest.

In the petition, CWA points out that the potential Sinclair-Tribune merger would reduce competition, harm local news coverage, and eliminate jobs, while noting that there is broad opposition to the Sinclair-Tribune merger among labor unions; civil rights, consumer, and public interest organizations; cable, satellite TV, and rural broadband providers; independent news and entertainment programmers; as well as many members of Congress, state attorneys general, and members of the general public.

The petition also points out that Sinclair has a long history of scaling back quality news and cutting jobs, and that when Sinclair buys a station, cutting local news operations is not far behind, citing examples from across the country. "The Commission should deny the Sinclair-Tribune merger," CWA concludes.

Digital First Media (DFM), the country's second-largest newspaper chain, is owned by Alden Global Capital, an extremely profitable hedge fund. Despite earning far higher-than-average profits, DFM papers have been laying off staff at twice the industry rate. A new video from DFM workers examines how the hedge fund-owned company has gutted local news organizations across the country and how NewsGuild-CWA members are fighting back. 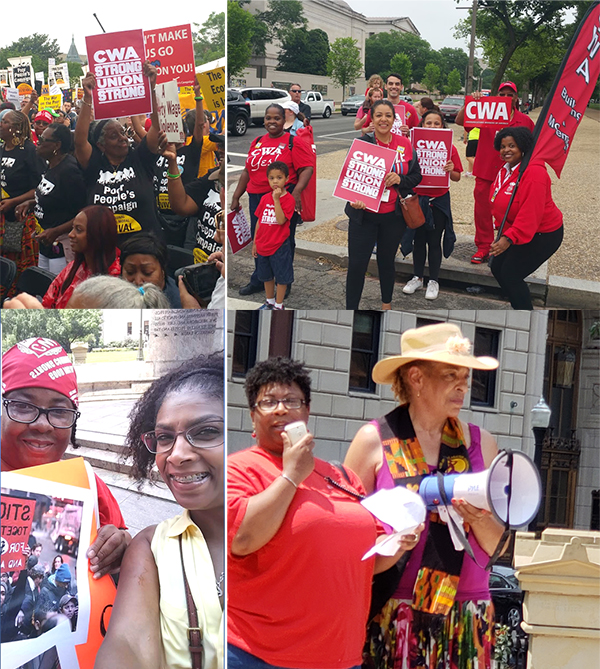 Over the past month, CWAers in more than 30 states have engaged in actions as part of the renewal of the Poor People's Campaign to mobilize against the structures that are supporting economic injustice and undermining our democracy. Advocates and supporters of the Poor People's Campaign converged from all around the country in Washington, D.C., (top two photos) on June 23 for a mass rally and global day of solidarity. CWAers also joined a rally in Columbus, Ohio. Speaking at the Washington, D.C., rally were CWA District 6 Vice President Claude Cummings, Jr., who heads CWA's Human Rights Program, and CWA Local 2222 member from AT&T Mobility, Sharita Bryant.

CWA Opposes Plan to Merge Departments of Labor and Education

The Trump Administration came out with a new proposal this week to merge the Department of Labor and the Department of Education, a move that would weaken programs that serve and protect working families and concentrate even more power in the hands of large corporations.

For more than 100 years, the Department of Labor has had a unique and specific mission – to promote and develop the well being of working people in the United States, to improve working conditions and workplace safety, and to enforce the laws that protect our rights in the workplace, including the right to join together to negotiate for better wages, benefits, and working conditions.

While the Department of Education is a newer agency, its mission is no less important. It is responsible for making sure our young people are well-educated and have equal access to education and that our schools are free from discrimination.

"The Administration wants corporations to have more power over our lives. But children need a Department of Education that stands up for them. Working people need a Department of Labor that stands up for them. This radical plan would weaken both agencies, leaving working people and children more vulnerable to corporate abuses at work and in the education system. We urge Congress to reject this ill-conceived plan," CWA said in a statement.