After three weeks on strike, 1,400 CWA members returned to work after reaching a contract agreement with Frontier Communications that protects jobs in West Virginia and Ashburn, Va.

"I could not be more proud of our members," said Ed Mooney, Vice President of CWA District 2-13. "Going on strike is never easy. But they knew what was at stake for their co-workers and for their communities. Thanks to their strength and unity, our bargaining team has reached an agreement with Frontier that will ensure that they will continue to have good, family supporting jobs."

Members will hold a vote on the proposal in the coming weeks. Read more about the agreement here.

During the strike, CWA members received an outpouring of support from community members and legislators, and they were joined by hundreds of supporters at a rally in Charleston on Saturday.

AT&T wireless workers from nine southeastern states and the U.S. Virgin Islands voted to ratify a contract providing increased wages, more job security, and rollbacks of offshoring and outsourcing for more than 12,000 workers.

Read more about the contract here.

The regional director of the National Labor Relations Board has determined that the Pittsburgh Post-Gazette violated federal law by refusing to pay a 2018 increase in the health care costs of 150 members of the Newspaper Guild of Pittsburgh/CWA Local 38061 while the two parties are involved in contract negotiations.

The Guild filed an Unfair Labor Practice charge against the company on Jan. 12 because, through its union-busting law firm King & Ballow of Nashville, Tenn., it refused to pay a 5 percent increase in the health care premium for 2018, thereby unilaterally cutting health care benefits.

Companies involved in bargaining are required by federal law to maintain the same level of wages and benefits of expired contracts.

The Guild and other unions at the PG have been involved in contract negotiations with the paper for more than a year. Its contract expired March 31, 2017.

CWA members from Local 4703 in New Albany, Ind., are mobilizing for a fair contract at AT&T Midwest. 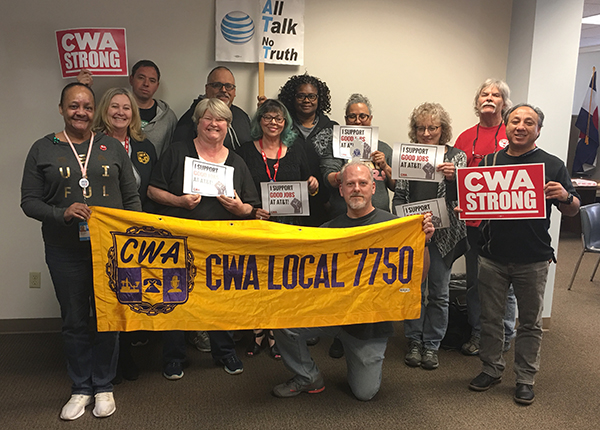 CWA members from Local 7750 in Denver, Colo., are mobilizing for a fair contract at Legacy T.

Employees at the Missoula Independent, an alternative weekly newspaper in Montana, filed with the National Labor Relations Board to begin the process of forming a union with CWA. Support for the filing was unanimous across the staff's editorial, production, and sales departments.

Why Buybacks are Bad News for Workers

Buybacks are a financial maneuver in which a company manipulates its stock prices by using cash and profits to purchase its own shares. By pumping this money back into the company and reducing the number of shares, the company's stock price automatically goes up. Buybacks were illegal in the U.S. until 1982.

By buying back their own stock, the company is artificially boosting the stock price without actually becoming more profitable or hiring more workers. These gains go directly to wealthy investors – not to workers.

Buybacks have exploded this year after the passage of the Republican corporate tax cut bill, with companies poised to buy back the largest number of shares in at least 10 years.

Why should workers care?

Major corporations, including CWA employers like AT&T, Verizon, American Airlines, and many more made big promises on what they would do if the Republican corporate tax bill passed. President Trump promised that the bill would guarantee a $4000 raise for every worker.

AT&T announced after the tax bill passed that they will pay workers a one-time $1,000 bonus – a far cry from the $4,000 salary increase promised by President Trump. In 2016, AT&T brought in $163 billion in revenue and made $13 billion in profit. This success was built on the hard work of CWA members at AT&T. But instead of sharing that success, AT&T management has used those profits to pay themselves and funneled billions to investors through buybacks. On top of all this, AT&T announced layoffs of techs and customer service reps, while continuing to outsource work to low-wage vendors both in the U.S. and offshore.

In 2016, Verizon bought back $5 billion in stock just before the CWA strike, while claiming it didn't have enough money to provide workers better job security.

How to fight back.

The Republican corporate tax bill is a massive giveaway to the wealthiest and the top 1%, paid for by working families. CWAers are on the front lines urging Congress to pass legislation to fix some of the worst parts of the bill.

Senator Tammy Baldwin (D-WI) has introduced the Reward Work Act, supported by CWA, which would prohibit many of these harmful buybacks.

In addition to causing a surge in buybacks, the tax bill actually contained incentives for companies to offshore jobs. Democrats in Congress are rolling out legislation to crack down on these offshoring incentives and keep jobs in the U.S.

Pennsylvania U.S. Senator Bob Casey has introduced the United States Call Center Worker and Consumer Protection Act, which would make U.S. companies that offshore their call center jobs ineligible for certain taxpayer funded grants and loans. The bill would give U.S. consumers a right to know where they are calling and to be transferred to a U.S.-based location, and create a public list of companies that offshore call center jobs.

This legislation is especially important in light of the recently passed Republican corporate tax cut bill which gives companies even more incentives to send jobs overseas. 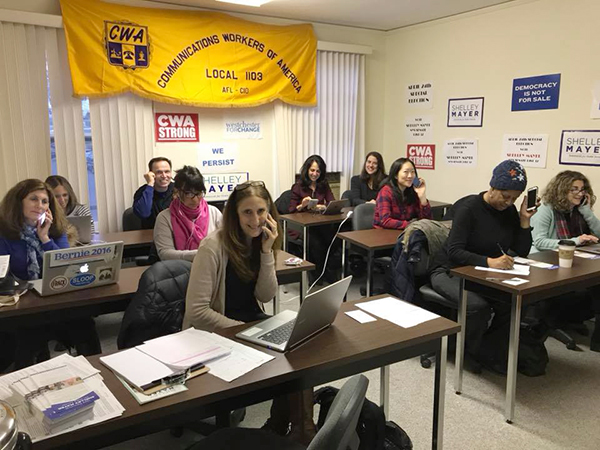 CWAers from Local 1103 in Port Chester phone banked for Assemblymember Shelley Mayer for New York State Senate District 37. The special election is coming up on April 24! 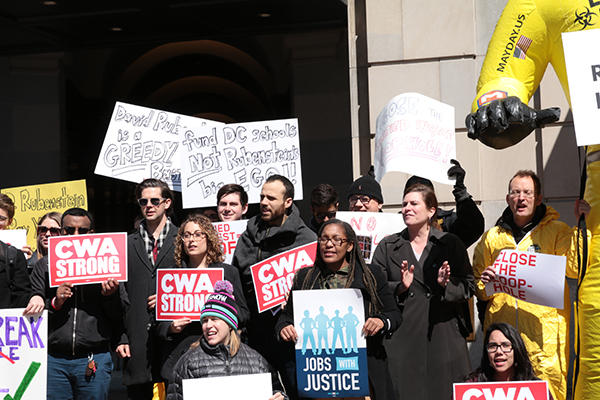 CWAers rallied in support of a bill introduced by D.C. Councilman David Grosso to close the carried interest loophole – a tax loophole that has allowed financial bigwigs to make even more money by paying a lower tax rate. Closing the loophole and making Wall Street pay their fair share would raise an estimated $152 million for D.C.