CWA-Represented Workers at AT&T to Get $1,000 Bonus

Republican leaders have promised that households would receive on average a yearly $4,000 wage increase as a result of the tax bill that passed earlier this week. They also have claimed that the corporate tax plan would produce new jobs in the U.S. as companies return work from offshore.

Just like tax cuts in the bill, the AT&T bonus is temporary and falls short of promises the Republican leadership has made to support working and middle-income families. Speaking to the Wall Street Journal, President Shelton said that while CWA was pleased to have negotiated additional money for members, "We won’t rest until we get at least what they promised," from AT&T and other employers.

Shelton also stressed the importance of the union in holding employers accountable. "By pushing employers for this raise, CWA proves that working people have power when we join together to negotiate for a fair return for the work we do. Unions remain the most effective means for working people to stand together and achieve wage growth and keep good jobs in the U.S. If you don't ask for your fair share, you'll never get it, so join a union and start asking," Shelton said.

There's no question that the tax legislation is a huge giveaway to corporations and the wealthiest Americans at the expense of working families and young people who will be stuck paying the bill for decades.

This is an example of deal-making by and for corporate interests and the 1 percent. Working people will pay the price for the tax loopholes that encourage companies to move even more jobs offshore and the attacks on programs that working and middle income families count on.

Congress's own Joint Committee on Taxation pointed out that benefits for working and middle income families are meager and temporary, with just 10 percent of the tax cut going to middle and working class families. The JCT also noted that 53 percent of taxpayers will see their taxes go up in 2025, because of the games Republicans are playing.

The plan adds at least $1 trillion to the deficit, and that already is being used by Republican leaders to justify their campaign to cut Medicare, Medicaid and Social Security.

This tax plan is upside down. Instead of making working families pay more for tax breaks for the corporations and the richest Americans, we should be closing the loopholes that Wall Street will continue to exploit. We should be rebuilding our infrastructure, making education affordable, and making sure that corporations keep good jobs here in the U.S., instead of opening up new loopholes that encourage the offshoring of jobs, as this tax plan does.

President Trump and the Republican leadership still claim that working families will get at least a $4,000 pay raise, even though most economists – and even CEOs – say that corporations will use their tax cuts to buy back stock and reward investors.

The American people know a bad deal when they see it. That's why the percentage of Americans who oppose the plan, now 55 percent, continues to grow.

Those voices will grow even louder come Election Day 2018. We'll keep exposing this Republican tax plan as a corporate money grab that results in working and middle income families paying more, but getting less. We’ll keep reminding working people about the $4,000 raise that President Trump and the Republican leadership promised them.

In a first-of-its-kind agreement, NewsGuild-CWA reached a "global settlement" with GateHouse Media that improves wages and protects health benefits at 16 GateHouse-owned newspapers.

"By negotiating a single agreement for 16 newspapers, we have significantly enhanced workers' power now and for the future," said Bernie Lunzer, NewsGuild president. "Rather than negotiating separately in small groups, our members are facing a common adversary together. This agreement provides a great platform for future negotiations."

In addition to pay increases, the union won a guarantee that health insurance coverage would remain at current levels without increasing employees' costs in 2018. GateHouse had been planning to increase employees' share of premium costs or force them to move to a plan with fewer benefits. In either case, employees' health care costs would have increased significantly.

"The health insurance freeze is a major accomplishment," said negotiating committee member John Hill, who is vice president from NewsGuild Region 1 and president of the Providence (RI) Local. 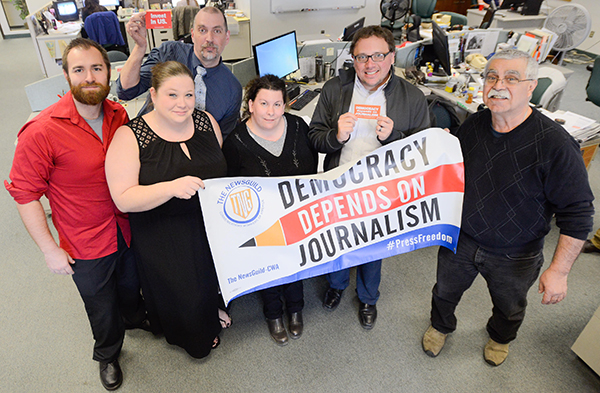 GateHouse employees in Utica, NY, marked World Press Freedom Day on May 3, 2017, by reminding the company that "Democracy Depends on Journalism" and urging management to "Invest in Us."

"AFA made it possible for our Silver Airways Flight Attendant family to exercise our rights to collectively bargain for our future," said Kate Britt, AFA Silver Airways President. "Although most Flight Attendants in the U.S. have contracts that define pay, benefits, and working conditions, this is a rare situation for most Americans today. We are proud to have stood together to gain AFA representation and the right to bargain. Achieving better pay and improvements at work with job security is especially sweet immediately prior to the holidays. We look forward to implementing our new contract as we enter a New Year. Congratulations to my flying partners at Silver Airways and to all of aviation's first responders in AFA who supported us and made this achievement possible."

CWA has filed a class action lawsuit against T-Mobile US, Amazon.com, Inc., Cox Communications and Media Group, and hundreds of other large employers and employment agencies who allegedly engaged in the unlawful practice of excluding older workers from receiving job ads on Facebook for open positions at their companies. The lawsuit challenges how Facebook’s paid ad platform is being used to hide job ads and opportunities from older workers nationally.

Through an in-depth investigation, CWA discovered that hundreds of employers and employment agencies are illegally targeting their employment ads on Facebook to exclude older workers who fall outside specified age ranges (such as ages 18 to 40, or ages 22 to 45), purposely preventing these older workers from seeing the ads or pursuing job opportunities. The Complaint alleges that this practice constitutes a violation of federal, state, and local laws that bar age discrimination in employment advertising, recruiting, and hiring.

"Today, the primary way workers find out about job openings is online, including by getting job ads on Facebook. It's not right if people my age are deliberately screened out, and I don't even get the chance to hear about jobs that I know I have the skills to do," one of the plaintiffs, a former call center worker, said.

A year ago, an investigation by the news organization ProPublica found that Facebook's platform made it possible for African Americans, Latinos, and Asian Americans to be excluded from receiving ads for various economic opportunities, including housing and employment ads.

The merger would result in one company becoming the largest owner of local broadcast stations in the country, with more than 220 stations in 108 markets. This would extend the reach of Sinclair from 38 percent of U.S. television households to 72 percent.

This would have a destructive effect on what Americans see and who they hear on their local news by stifling independent media voices through media consolidation. Sinclair requires local affiliates to air editorials and materials that show significant bias and are produced at the corporate headquarters – not locally in individual markets.

Sinclair also has "a long history of scaling back local news and killing jobs," Shelton wrote, citing multiple locations where Sinclair purchased stations and fired news staff. Members of NABET-CWA and TNG-CWA work at both Sinclair and Tribune media operations.

CWAers can take action to help stop this job-killing merger that threatens competition and independent, quality journalism by signing the petition here.

At the CWA endorsement event, CWA Local 2108 Chief Steward Tamera Nelson highlighted Jealous's priorities, which are the same as the priorities of union members and other working people in Maryland: good jobs with benefits and a future, affordable college for our kids, and higher wages including supporting the Fight for $15. She said that Jealous doesn't just talk the talk – he walks the walk, noting that Jealous showed up to show support during workers' 49-day strike at Verizon last year. 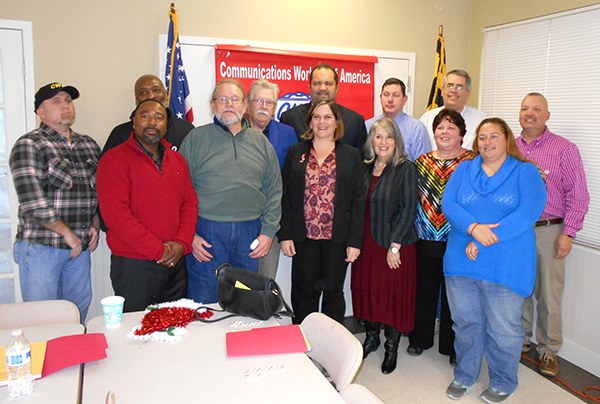 CWA to Congress: Save Union Jobs at the Government Printing Office

Along with 11 other major unions, CWA wrote a letter to members of the Committee on House Administration to express concern about legislation that would directly threaten union jobs at the Government Printing Office (GPO), while providing no reduction in cost or improvement of service.

"As we understand it, the proposal being considered authorizes congressional printing and publishing to be contracted out despite the fact that there is no indication that any funds can be saved by this practice," the unions wrote.

"As drafted, this proposal undermines the rights and very livelihoods of union members at the GPO. A proposal like this...should be written collaboratively and in a bipartisan fashion, with the input of all stakeholders especially GPO employees and their union leadership."

The unions urged Members of Congress to pull this proposal from consideration and start over with the full participation of all stakeholders at the table, and to vote "no" if the proposal moves to mark-up in its current form.

In a victory for workers and consumers, the L.A. City Council voted 12-0 last week to make L.A. the first city in the country to require that banks applying for city contracts reveal whether or not they use a quota system to press their employees to push high-cost products that consumers don't need.

Members of the Committee for Better Banks (CBB), a project of CWA, along with the Alliance of Californians for Community Empowerment (ACCE), mobilized and organized over the last year to raise the issue among workers, the community, and the City Council members. Workers pushed for adoption of an amendment that will prevent public money from going to banks that prey on their workers and their customers with abusive sales goals. 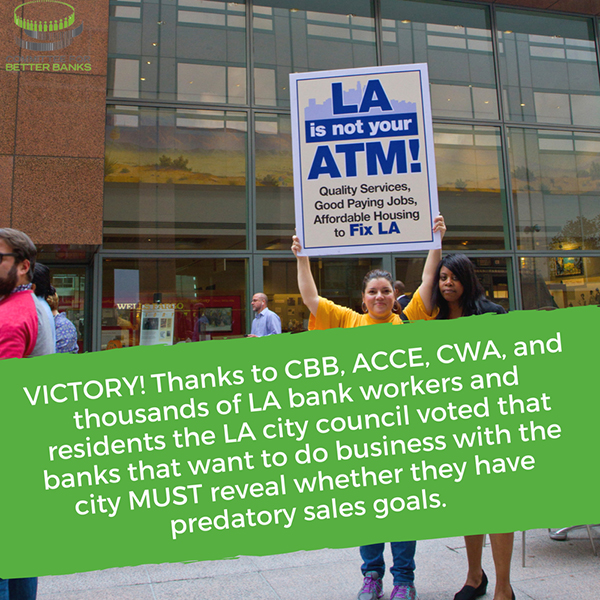 Please note: the CWA e-Newsletter will be taking a break for the holidays next week. We will be back again on January 4, 2018! 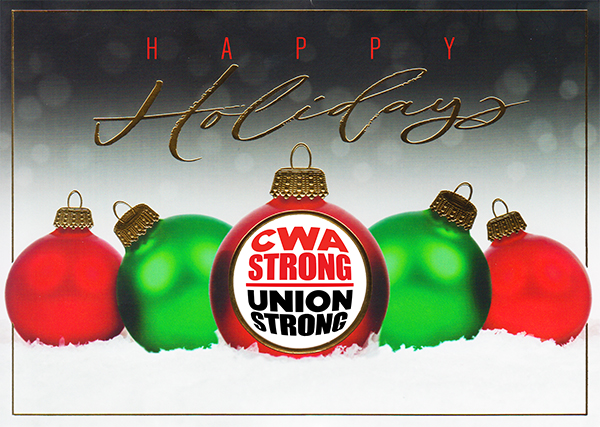