As the U.S. Senate approaches a vote on the disastrous GOP tax bill, CWA wants to make sure that the nation's biggest employers actually give working families the average $4,000 wage increases the Trump administration claims will result from cutting the corporate tax rate.

CWA President Chris Shelton said that if the cuts proposed in the "Tax Cuts and Jobs Act" go into effect, corporations should guarantee that working people will receive the raises the administration promised and ensure that the bill's treatment of overseas profits will not result in domestic job loss.

Shelton sent individual letters to CEOs of some of the largest corporations where CWA members work including Verizon, AT&T, CenturyLink, Frontier Communications, American Airlines, General Electric, NBC Universal, and ABC Entertainment asking them to sign a memorandum of agreement as part of the current contracts with CWA now in force. "Together, through collective bargaining, we can ensure promises about wages and jobs are kept," Shelton wrote. 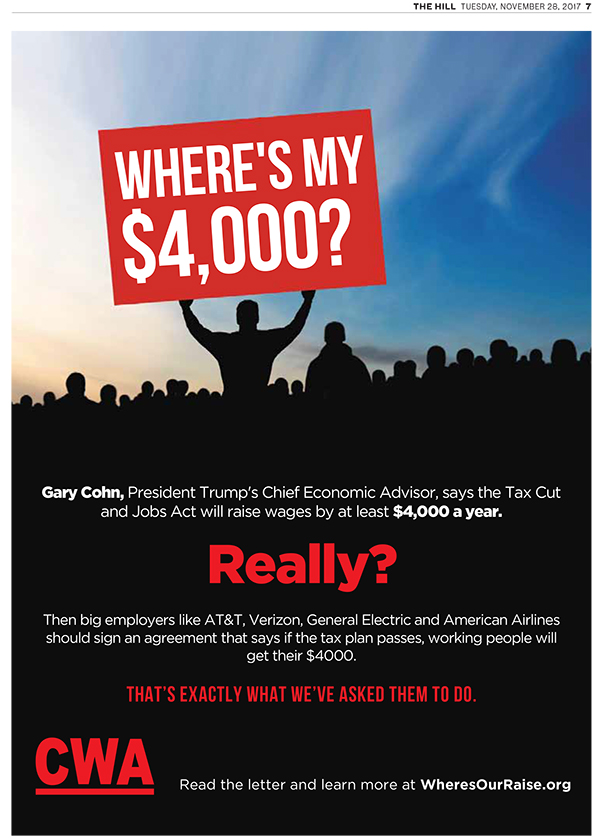 CWA's call for working people to get raises if the tax plan passes was front page news in the New York Times:

"President Trump and the Republican Congress have been trying to sell this corporate tax cut to working families by making big claims about wage increases, investment and job growth that don't seem to be supported by the evidence," said Chris Shelton, the president of the union. "We're going straight to the people who know how corporations plan to spend the billions of dollars being handed over to them — the C.E.O.s — and asking them if they intend to keep the promises that Trump is making on their behalf." 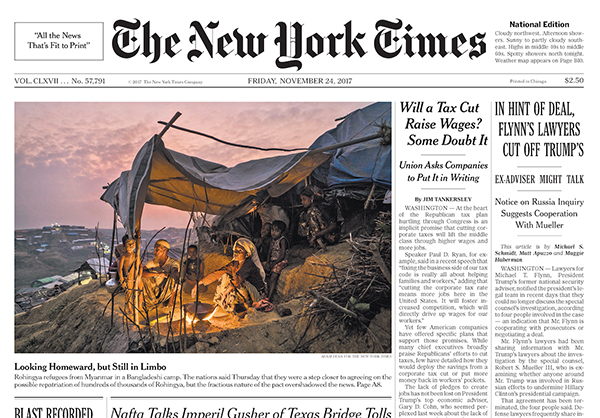 As Bloomberg reports, corporations are not planning to give working families the average $4,000 wage increases that the Trump administration has promised:

"Major companies including Cisco Systems Inc., Pfizer Inc., and Coca-Cola Co. say they'll turn over most gains from proposed corporate tax cuts to their shareholders, undercutting President Donald Trump's promise that his plan will create jobs and boost wages for the middle class.

The president has held fast to his pledge even as top executives' comments have run counter to it for months. Instead of hiring more workers or raising their pay, many companies say they'll first increase dividends or buy back their own shares.

Robert Bradway, chief executive of Amgen Inc., said in an Oct. 25 earnings call that the company has been "actively returning capital in the form of growing dividend and buyback and I'd expect us to continue that." Executives including Coca-Cola CEO James Quincey, Pfizer Chief Financial Officer Frank D’Amelio, and Cisco CFO Kelly Kramer have recently made similar statements.

"We'll be able to get much more aggressive on the share buyback" after a tax cut, Kramer said in a Nov. 16 interview.

Watch President Shelton on MSNBC talking about how the tax bill would be disastrous for working people here.

The Senate is expected to vote on the GOP's tax bill this week, so we need to flood the Capitol with calls. Republicans in the Senate are trying to ram through the largest transfer of wealth from working families to big corporations, millionaires, and billionaires in our lifetimes. They want to raise taxes on working families to pay for permanent tax cuts for big corporations and their wealthy donors.

Click here or call 1-888-848-4824 to join thousands of other CWA members on this day of action.Tell your Senators to oppose any tax plan that raises taxes for working people to give big corporations a tax break. 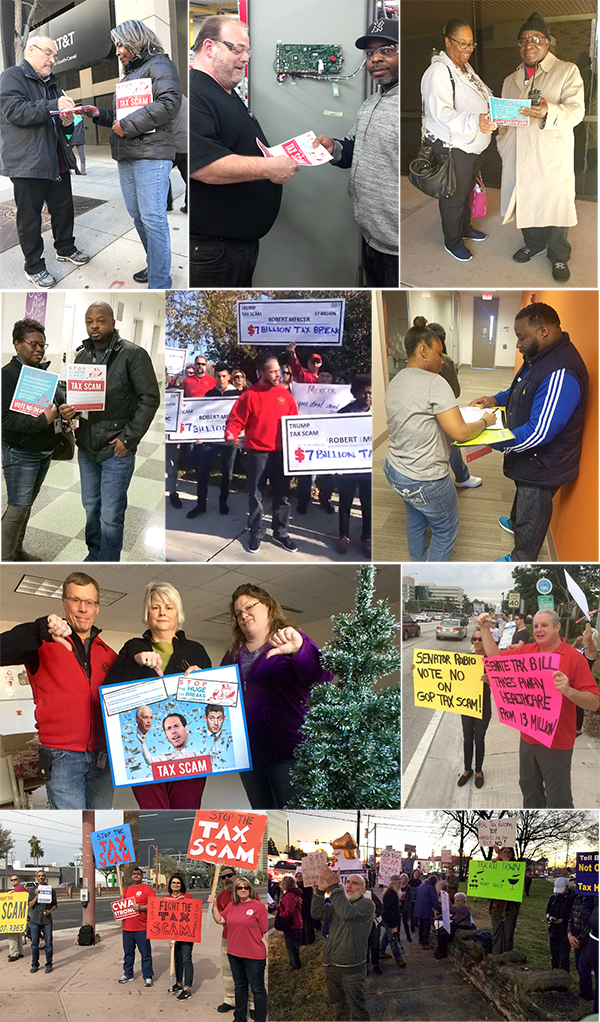 In an NLRB-supervised election, Aclara installers in the New York Metropolitan area voted overwhelmingly to join CWA. There are 160 workers at three locations – Staten Island, Stony Point (Rockland County), and Westchester County – and the represented workforce is likely to expand.

The employer waged a nasty campaign which mostly centered around dues, strikes, and terminating three union supporters over the course of the past two months. The workers stayed strong with many showing their strong public support for the union with wristbands, hats, jackets, lanyards, and a Vote Yes flyer.

More than 30 workers filled out wage and hour complaint forms, which were sent to the New York State Dept of Labor. The night before the election, a conference call was held with workers and top officials from the NYS Attorney General's office where they heard from 33 workers who had wage and hour problems. The NLRB also issued a complaint against the company for firing a worker for union activity the night before the election. 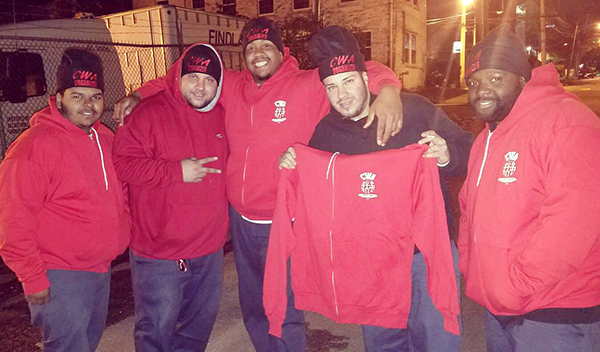 The NFFWU is the successor of several regional "Fight for 15" groups, some of whom were represented by Local 36047.

In a big victory for Avaya workers and retirees, CWA has successfully preserved our collective bargaining agreement with the company as it emerges from bankruptcy proceedings. Retiree benefits and pensions will also remain intact.

CWA's quick intervention was key to protecting workers and retirees. Not only are CWA members among the few employees largely unaffected by the bankruptcy, but CWA was also able to ensure that employees who were owed severance pay months before the bankruptcy received their severance payments.

CWA Telecommunications and Technologies Vice President Lisa Bolton credited the careful work and coordination between CWA's National and Local leadership in consultation with bankruptcy experts for the success. "We are glad to be close to putting this process behind us, and look forward to Avaya's future as a strong, unionized company," Bolton said.

This week, President Trump orchestrated a takeover of the Consumer Financial Protection Bureau (CFPB) by appointing Mick Mulvaney as director, despite laws that prohibited him from doing so. Mulvaney has heavily criticized the existence of the CFPB, a pro-consumer independent agency, so appointing him director guarantees the gutting of consumer protections.

CWA President Chris Shelton released a statement  in response to the Trump administration's attempt to take over and weaken the Consumer Financial Protection Bureau (CFPB):

The leadership battle at the CFPB is part of a larger struggle over whether our country will return to the days when big Wall Street banks could act with impunity and without accountability. It's outrageous that President Trump is flagrantly flouting the law in an attempt to give Wall Street banks the green light to again rip off American working families. Trump's attempt to install Mick Mulvaney as acting CFPB director violates the clear language of the Dodd-Frank Act prohibiting him from doing so.

The CFPB has proven itself to be an essential check for consumers on the power and abusive practices of big banks. Since its inception, the CFPB has returned over $12 billion to American consumers harmed by Wall Street wrongdoing and has helped to expose the illegal actions of such corporate bad actors as Wells Fargo and Santander, where Mulvaney's former Chief of Staff serves as a lobbyist working to undermine the consumer protection rules the bureau is charged with implementing.

The CFPB gives bank employees who are concerned about potentially illegal high-pressure sales tactics a way to voice their concerns without having to navigate a maze of regulatory agencies.

Mick Mulvaney has expressed strong opposition to the CFPB and its mission. Putting him in charge at the agency not only violates the law, but is a classic case of asking the fox to guard the henhouse. 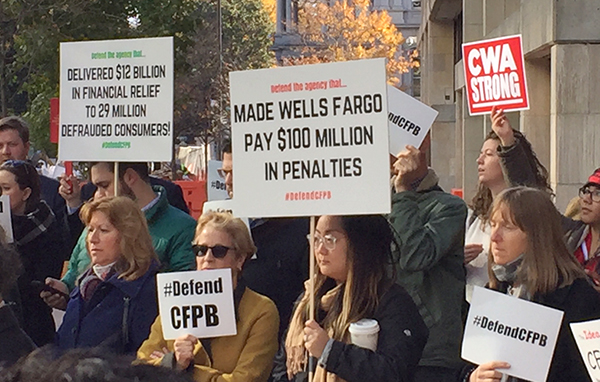 CWAers rallied this week in Washington, DC to save the CFPB. 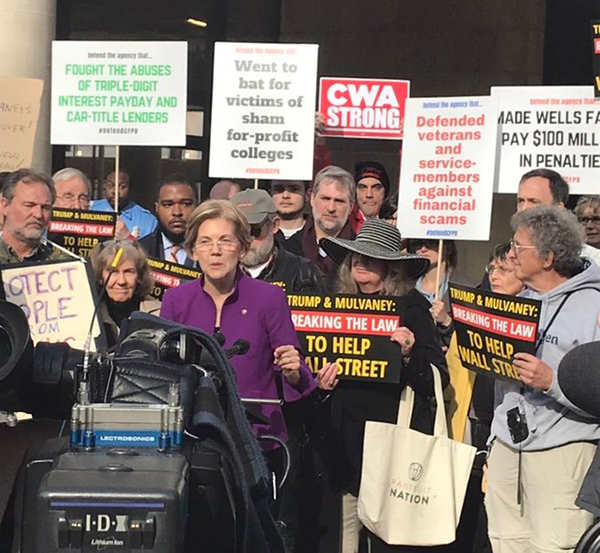 CWA: AT&T-Time Warner Merger Must be Reviewed on Merits, Not Petty Politics

In a letter to the Democratic Attorneys General Association, Shelton wrote that the politicization of the review process "is a sad day for the rule of law and freedom of the press." This lawsuit appears to be politically motivated, as evidenced by President Trump's personal vendetta against CNN.

The Department of Justice is demanding, as a condition of approving the AT&T-Time Warner merger, that AT&T divest either DIRECTV or CNN, or both.

CWA represents about 10,000 DIRECTV workers and several hundred workers at CNN, in addition to about 150,000 workers at AT&T.

This merger would help maintain and create good U.S. jobs, by ensuring that workers have a union voice and workplace representation. It also would develop new and innovative ways to deliver technology and content, providing much-needed new competition to companies like Google, Facebook, and Amazon where working people don't have union representation.

The Justice Department has claimed that consumers would suffer if this merger were approved, but the notion that spinning off a television network would affect consumer costs is laughable. Vertical mergers just like AT&T-Time Warner, including Comcast-NBC in 2011 and others, routinely have been approved.

Rebuild for Puerto Rico and the Virgin Islands Act 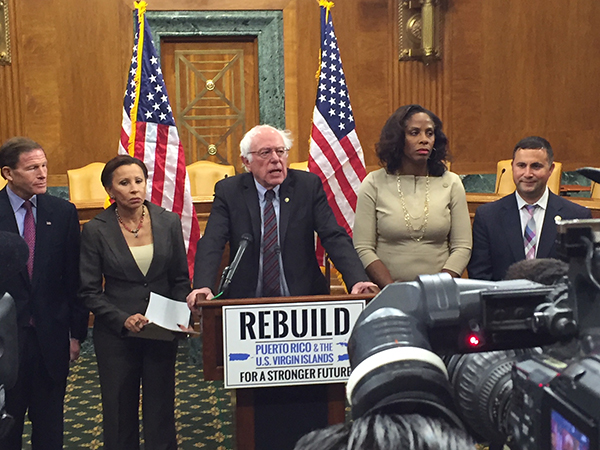 The National Coalition on Occupational Safety and Health will be held Dec. 5-7 at the Maritime Institute near Baltimore, Md.

This national conference brings together safety and health activists from national and local unions, COSH groups, worker centers, and others in the safety and health movement. It's a great opportunity to learn about latest developments and initiatives in occupational safety and health and to strategize about how to fight back against attacks on worker protections.

How to Save U.S. Jobs