Broadcast operators at AT&T DIRECTV at the Los Angeles Broadcast Center voted overwhelmingly to join NABET-CWA. AT&T refused to allow these workers to access the Neutrality and Card Check afforded to 8,000 other DTV workers recently organized under that agreement, so workers used the NLRB process instead, and got a quick election in just under three weeks. Workers won in spite of having to each endure four 90-minute sessions with an outside union buster. The win was even sweeter because this union buster was a former Local Union President from another union. NABET-CWA Local 59051 President Kevin Wilson and District 9 Area Director John Dugan worked on this. 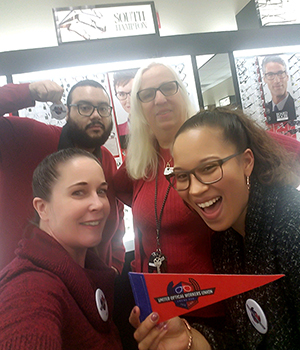 Workers at the Visionworks store in Danbury, CT.

The agreement with Silver management includes key economic and quality of life improvements.

CWA President Chris Shelton issued this statement on the Republican tax plan passed today by the House of Representatives.

Today the House voted to cut taxes for corporations and the 1 percent and make working families pay.

By supporting this plan, House Republicans finally abandoned the pretense that their tax plan will help middle class families. According to the congressional Joint Committee on Taxation, in fewer than 10 years, millions of middle income families will be paying higher taxes. Many families will see their taxes increase immediately.

Across the board, members of my union and middle class families will be hurt by this plan, whether by the loss of the medical expense deduction, new taxes imposed on education benefits, the inability to deduct interest on student loans, the loss of the state and local tax deduction, or the forced budget cuts to Medicare and other critical programs.

In the Senate plan, all the changes that could help middle income and working families are temporary. That would result in as many as 47 million middle income families paying higher taxes in just a few years.

The tax cuts for corporations, however, are permanent. These corporate tax cuts are being proposed at a time of unprecedented corporate profits, and this tax plan gives corporations new incentives to send jobs overseas. 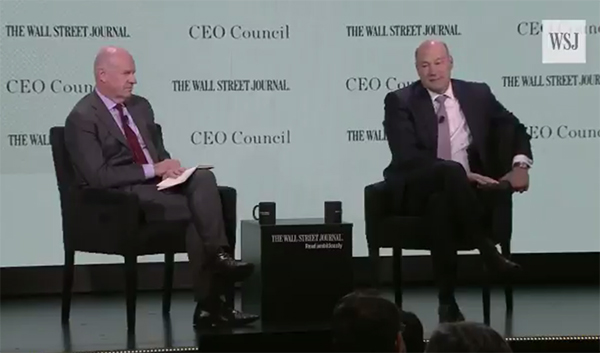 At a Wall Street Journal forum, CEOs attending were asked if they plan to increase their company's capital investments if the GOP's tax bill passes. Just a few hands go up. "Why aren't the other hands up?" Trump’s chief administration economic advisor Gary Cohn asks. 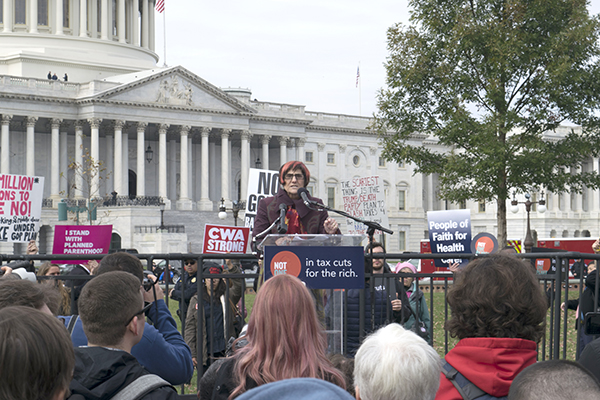 CWAers rallied against the Republican tax bill in Washington, DC. 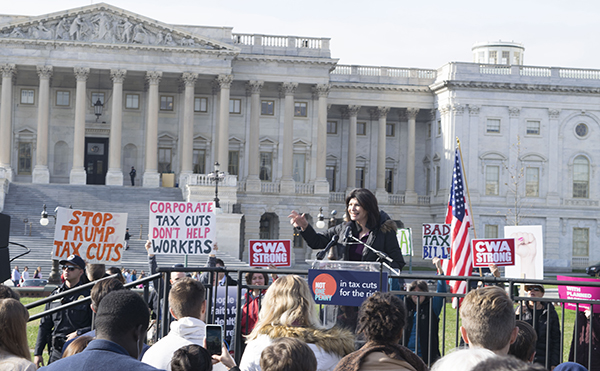 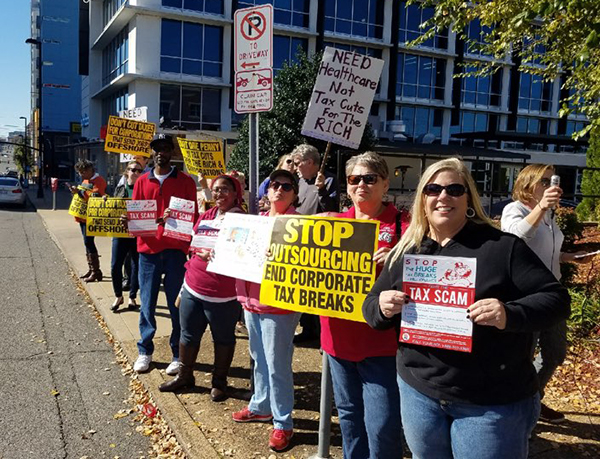 In Nashville, Tenn., CWAers and allies rallied outside a Wells Fargo office to protest corporate tax cuts that will send more jobs overseas.

In a victory for working people in New Mexico, a district court judge issued a permanent injunction to provide state employees two hours of paid time off to vote in municipal elections.

Previously in 2014, the state government's voting leave policy was changed so that workers were only allowed paid time off to vote in state and federal elections – not municipal.

Thanks to the injunction, state employees will now have paid time off to vote in municipal elections, including earlier this week in Tuesday's Albuquerque runoff election.

CWA member Daniel Secrist, an employee at the Museum of Natural History and Science, filed the lawsuit with the assistance of CWA, along with AFSCME.

"Allowing state workers paid time off to make our voices heard in municipal elections is a right that should be protected and treated just like all elections," said Secrist. "This is a good decision, and a victory for working people of New Mexico. We should be looking for ways to make it easier for working people to vote – not make it even more challenging."

How to Fight for a Better NAFTA

Hinton said, "All of us have seen over the past few decades what bad trade deals that don't focus on workers actually do to our jobs, our livelihoods, and our communities. Now that NAFTA is being renegotiated, we have an opportunity to fix the deal and make it work for working people."

"We've shown and proved that we can win. But we also know if we don't fight, we will lose. We have to be all in on this," said Clark.

Shelton said, "Many of the same battles we fought over the TPP are the same battles that we're gearing up for right now. We all know exactly whose interest the TPP would've benefited: multinational corporations. NAFTA serves the interest of those corporations in many of the same ways the TPP did. NAFTA has weak labor and environmental standards with enforcement provisions that are designed to fail."

Senator Brown commended CWA members for their hard work on trade issues. "Thanks for what your union does on so many things, and especially what you're doing right now on NAFTA renegotiations. There's no union out there that's been more engaged in the fight on trade issues than CWA. It's so important to keep the pressure on. We need you to work with your local members, go to your county labor federation and get other unions engaged and involved. We've got to make sure that this Administration stays at the table until we get a deal that works for workers."

"We need a new NAFTA to protect American jobs, raise wages, and help all workers – not just the corporate bottom line," Shelton said. "We know that this will be a big fight, but we won our last fight against these same corporate interests when we defeated the TPP. We did that because all of you worked extremely hard to hold our politicians accountable and to make sure our voices were heard loud and clear by our senators and representatives. We need to do that hard work again."

Listen to the full call here.

Read President Shelton's op-ed in the Palm Beach Post on what a better NAFTA should look like.

CWA is calling for approval of AT&T's proposed acquisition of Time Warner.

The merger is about maintaining and creating good U.S. jobs and developing new and innovative ways to deliver technology and content. It also would provide much-needed new competition to companies like Google, Facebook and Amazon, where working people don't have union representation.

In a message to CWA telecom locals, CWA President Chris Shelton said CWA's action "was precipitated by the insistence of the Department of Justice – or the Trump Administration – that AT&T divest itself of DIRECTV, or CNN, or both. Since we have members at both DIRECTV and CNN (broadcast technicians and other workers for whom we've been fighting for fairness for more than 12 years), I felt it was time for us to get involved."

"In short, CWA knows how to walk and chew gum at the same time and AT&T knows that. We will do whatever it takes to represent our members by supporting the company when they deserve it or attacking them when they don't."

The Federal Communications Commission voted today to eliminate longstanding rules that were intended to protect local news coverage and make sure that we get a variety of local perspectives on current events. As a result, we will face a drastic loss of local news coverage – and jobs – as media companies consolidate.

The proposals seem to be tailor-made for the Sinclair Broadcast Group. Sinclair announced plans to buy Tribune Media in the spring, soon after the FCC lifted a cap on the number of stations a company can own. If the purchase is approved, it would give Sinclair access to more than 70 percent of television viewers in the United States.

NABET-CWA is part of the Coalition to Save Local Media, a broad and politically diverse coalition committed to stopping the harmful Sinclair-Tribune merger.

The groups also urged the FCC to protect the public interest by maintaining the agency's existing copper retirement notification rules.

Dom Trementozzi, president of CWA Local 1400, authored this letter to the editor published in the New Hampshire Union Leader:

Some of the most profitable U.S. corporations are getting away with sending thousands of good call center and customer service jobs to other countries or to contractors that have lower standards and pay lower wages.

It would be nice if these companies would step up and take some responsibility, but they just aren't doing that. Our union, the Communications Workers of America (CWA), is urging Congress to pass the U.S. Call Center Worker and Consumer Protection Act.

This bill would help in a couple of ways. First, it would require that the person you call tell you the location of their call center and let you request to be transferred to a U.S.-based call center. Second, it would prevent companies that send call center jobs overseas from getting taxpayer-funded loans.

Apply for the Beirne Foundation Scholarship for 2018-2019

The CWA Joe Beirne Foundation will award 16 partial college scholarships of $4,000 each for two years for the 2018-2019 academic year. Eligible for the scholarships are CWA members, their spouses, children, and grandchildren, including the dependents of retired, laid-off, or deceased members. Applications are available only online at the Foundation's website. The final deadline for the 2018-2019 school year is April 30, 2018.