Working families were the big winners in this week's elections. In Virginia, New Jersey, Maine, and other states and cities, working people and progressive voters rejected the harmful policy proposals and divisive message of President Trump and Republican candidates.

In Virginia, voters elected Ralph Northam governor, Justin Fairfax lieutenant governor, and Mark Herring attorney general. In a big turnaround that surprised pundits, voters elected at least 15 Democratic representatives to the House of Delegates who will put the concerns of working people and ordinary Americans first, and not be beholden to corporate and right wing interests.

Governor-elect Northam will help Virginia's working families succeed by ensuring fair wages and real opportunity to get a good education. He rejects the trickle-down economic and tax policies that the Republicans are pushing.

CWA members throughout the state walked neighborhoods and staffed phone banks to help turn out the vote for state delegate candidates as well as Northam, Fairfax, and Herring. 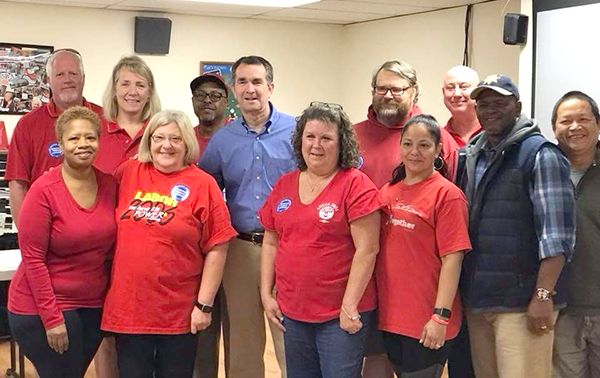 CWA members with Governor-elect Ralph Northam (center) at a labor walk in Richmond.

In New Jersey, by electing Phil Murphy governor, voters elected a champion for working and middle class families, something the state hasn’t seen for eight years. He has outlined a program that will create a stronger and fairer economy for everyone.

Phil Murphy understands that the role of government isn’t to enrich corporations and the wealthy, but to work for all of us, by ensuring that our schools have proper funding, that working people aren’t exploited, and that all our communities thrive. 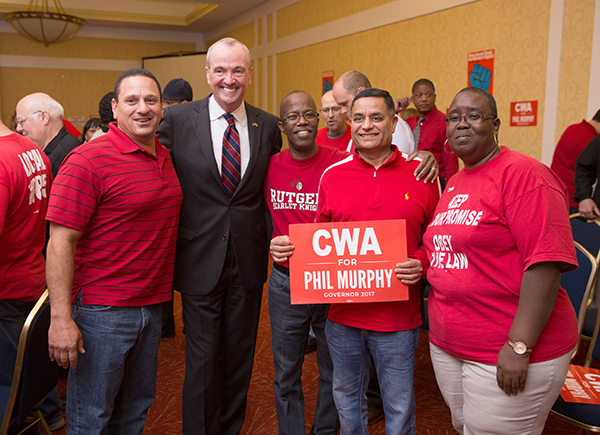 CWAers knocked on doors across the state to get-out-the-vote in support of Phil Murphy (second from left) for Governor.

Republicans plan to pay for huge tax breaks for corporations and the wealthy by cutting programs like Medicaid, Medicare, and others that working families rely on. Voters made clear last night that they reject this approach, and will make their voices heard again in 2018.

Workers at University of Tennessee campuses are celebrating a big victory over the governor's attempt to outsource all facilities management jobs.

Rallying around the message "Tennessee is Not for Sale," members of the United Campus Workers/CWA Local 3865 mobilized and worked with allies and a bipartisan group of state legislators to stop the attack on good jobs.

Governor Bill Haslam has been pushing a statewide contract with Jones Lang LaSalle (JLL) to outsource jobs throughout Tennessee, trying to keep details a secret.

UCW Local President Diane Moyer said CWA members will continue to fight against the outsourcing contract at other universities, including East Tennessee State and Tennessee State.

"Today's news signals relief for the thousands of UT employees across the state whose jobs were imperiled by the plan," the local said. "Millions of square feet of real estate and tens of millions of dollars will stay in the public interest."

Legislators are continuing to fight back against this Haslam deal and are pushing for oversight of the plan. 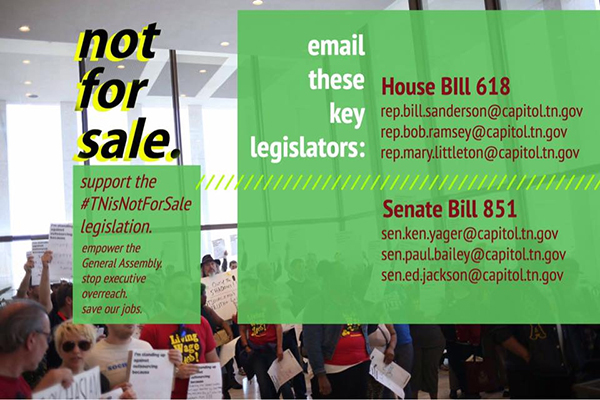 "Many of my members in Maryland work for AT&T. They are very worried about losing their jobs, because we've already seen this multi-billion-dollar company operate with an effective tax rate of 8 percent over the past 10 years and cut employment by 80,000 jobs.

The House Republican tax plan will make this bad situation worse, because it actually encourages companies to move good U.S. jobs offshore. This tax plan gives so much to corporations. On top of that, it would give away good U.S. jobs – the jobs working people and our communities depend on.

My co-workers and I play by the rules. We pay our taxes week in and week out. We don't have the luxury of tax lawyers, write offs and creative accounting to game the system."

Let your member of Congress know that you oppose this tax plan that cuts taxes for corporations and the super-rich. Dial 1-888-894-6720 to connect to your Member of Congress now, or visit this link. 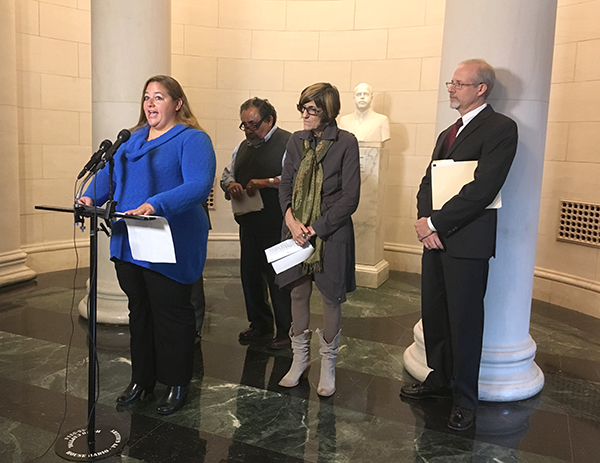 CWA Local 2107 President Shannon Opfer joined members of the Congressional Progressive Caucus at a press conference to speak about how the Republican tax plan is designed to encourage offshoring of U.S. jobs and harm working families.

Our Veterans Make Us Strong

This Veterans Day, our nation must renew its commitment to honoring our veterans instead of using them as props for political games.

At a time when the President and Republican political leaders should be focused on strengthening our veterans' health care system, they are outsourcing the responsibility by pushing veterans into the private marketplace with fewer resources for the help they need and deserve from our nation.

At a time when the President and those same Republican political leaders should be protecting veterans from fraud and abuse at the hands of the big banks, they are instead blocking veterans from joining together to fight back against being cheated.

At a time when the President and Republican leaders should be doing everything they can to help veterans find good, well-paying jobs in their communities, they are continuing to award federal contracts to companies that send good jobs offshore and they are providing tax incentives that encourage companies to send even more jobs overseas.

CWA bargainers reached a tentative three-year agreement covering 300 workers at St. Mary Corwin Hospital in Pueblo, Colo., members of CWA Local 7774. The tentative settlement provides for wage increases of at least 9.5 percent over the contract term, plus other improvements.

A ratification vote will be held over the next 30 days.

Get the Latest on NAFTA Renegotiations

Ohio Senator Sherrod Brown, one of the Senate's toughest fighters for working families, will join CWA President Chris Shelton, CWA District 4 Vice-President Linda L. Hinton, and IUE-CWA President Jim Clark on Monday, November 13, at 7 pm ET, for a town hall call on what we need to be looking out for as the Trump administration renegotiates NAFTA.

There are big issues at stake in these negotiations. Will the new NAFTA strengthen labor standards, raise wages and bring jobs back to our communities? Or will it make it easier for multinational corporations to boost profits at the expense of working families, our environment and our communities.

Register for the call today and let us know what questions you have about what negotiators have been up to and how we can make sure that a new NAFTA makes things better, not worse, for working families.

Click here to register for the call or text CWACALL to 49484. 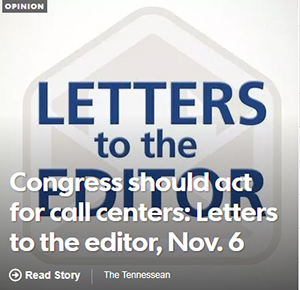 Deborah Sisco, president of CWA Local 3808, had this letter to the editor published by the Tennessean, Nashville's daily newspaper:

Some of the most profitable U.S. corporations are getting away with sending thousands of good call center and customer service jobs to other countries or to contractors that have lower standards and pay lower wages.

Our union, the Communications Workers of America, is urging Congress to pass the U.S. Call Center Worker and Consumer Protection Act.

This bill would help in a couple of ways. First, it would require that the person you call identify their location and at that time you can request to be transferred to a U.S.-based call center. Second, it would prevent companies that send call center jobs from getting taxpayer-funded loans.

It's time for our legislators to get on board with this bill. I urge everyone to reach out to their local, state and federal politicians to help keep customer care call center work in the U.S. and in Middle Tennessee. 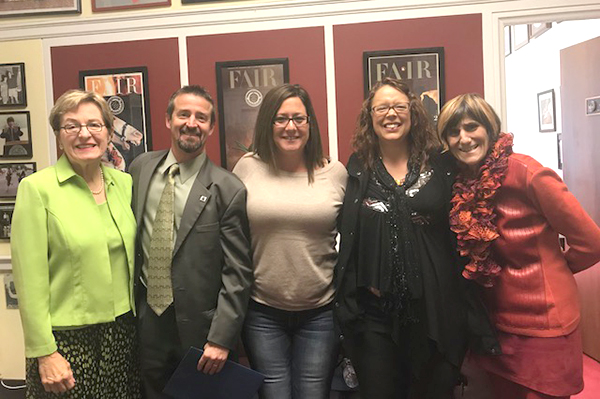 IUE-CWA members from across the country gathered in Washington, D.C., to lobby Members of Congress on how to negotiate a new NAFTA agreement that helps working families and on eliminating the CEO bonus loophole. The members met with Reps. John Yarmuth (D-KY), Marcy Kaptur (D-OH), and Rosa DeLauro (D-CT), among others. 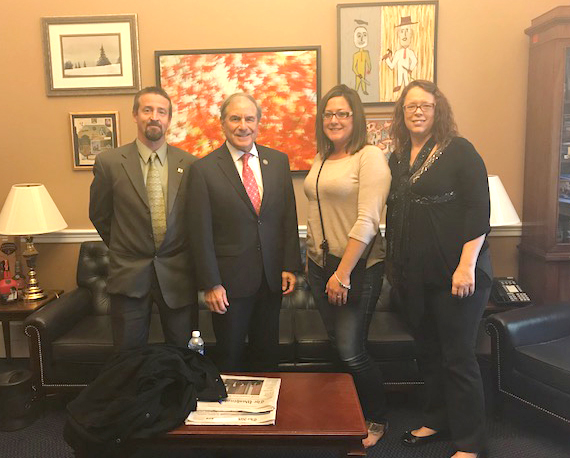 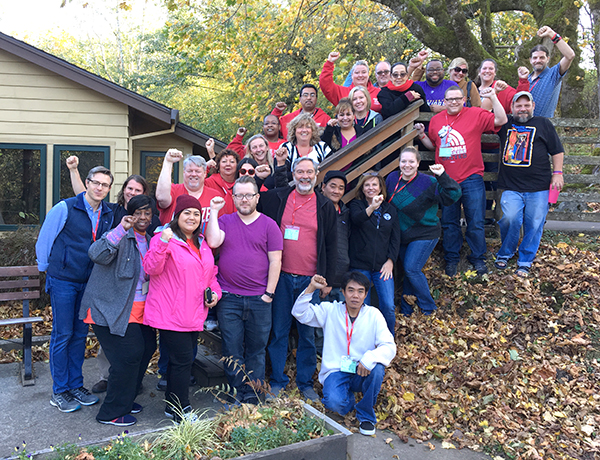 Activists and staff from District 7 came together for three days of brainstorming and union building at District 7's Organizing Retreat in Corbett, Oregon. The 30 CWAers reviewed and reported on organizing efforts and held strategy sessions on current and future campaigns.