The Republican tax plan is a handout to millionaires, billionaires, and big corporations that will raise taxes on working families and give corporations new incentives to send more U.S. jobs overseas. Republicans and White House staff have been working overtime to spin this deal as a "middle class tax cut." It's not. And this tax plan is likely to get much worse for working families as the House Ways and Means Committee moves forward.

What does this tax plan do to CWA working families?

This plan also adds at least $1.5 trillion to the federal debt over 10 years, and the budget framework adopted by Republicans already includes cuts in Medicare and Medicaid. Predictably, Republicans soon will start to complain about the budget deficit that they created and step up their attack on programs that working families rely on, like Medicare, Medicaid, health care, education and more.

We cannot allow tax cuts for the wealthy to harm millions of working families. CWA and our allies are fighting back against this massive transfer of dollars from working families to the richest 1 percent.

CWA President Chris Shelton held a town hall call with Rep. Mark Pocan (D-Wis.) on how the GOP tax plan will affect CWA members and what we can do to fight back. Listen to the recording of the call here.

Let your member of Congress know that you oppose this tax plan that cuts taxes for corporations and the super-rich. Dial 1-888-894-6720 to connect to your Member of Congress now, or visit this link.

AT&T management has tried to pull a fast one in negotiating with 21,000 CWA Mobility members. The company publicized what it called a "final offer," deliberately bypassing the CWA bargaining committee that has been pushing the company for ten months on the issues that members want to have resolved. AT&T sent out the proposal directly to members this week, a bad-faith bargaining scheme that isn't going to work.

In a message to Mobility workers, CWA District 1 Vice President Dennis Trainor noted, "In bargaining, the company's chief negotiator has repeatedly said, 'We have no interest in job security.' So it's no surprise the company's phony pledge on job security doesn't prevent them from closing your store or call center and offering you a job in Nome, Alaska!" Trainor stressed that the wage increases the company cited "will do little good if they can ship even more of our jobs to the Philippines, and won't do much good if they can close our store and open up a low wage authorized dealer store."

Sen. Jeff Merkley (D-Ore.) and 16 U.S. Senate colleagues signed on to a letter to AT&T CEO Randall Stephenson, calling on him to "reevaluate the current situation and engage constructively with union negotiators" to reach a contract.

"Our understanding is that AT&T workers in 36 states and Washington D.C. have been working without a contract for over 8 months. Investing in your employees, including through a limit on the amount of outsourcing of customer service work, would demonstrate a strong commitment to the American workforce and calm fears of further offshoring to countries including the Philippines and Mexico, and outsourcing to non-union contractors here in the United States.

"Even as AT&T faces the challenges of a rapidly evolving and volatile telecommunications industry, AT&T wireless workers are driving tremendous profits. These workers deserve a fair share of the wireless division's $1 billion monthly profit," they wrote.

The contract covering 1,600 CWA members at Frontier in West Virginia and Ashburn, Va., has been extended until March 3, 2018. The current contract was set to expire on Nov. 4. 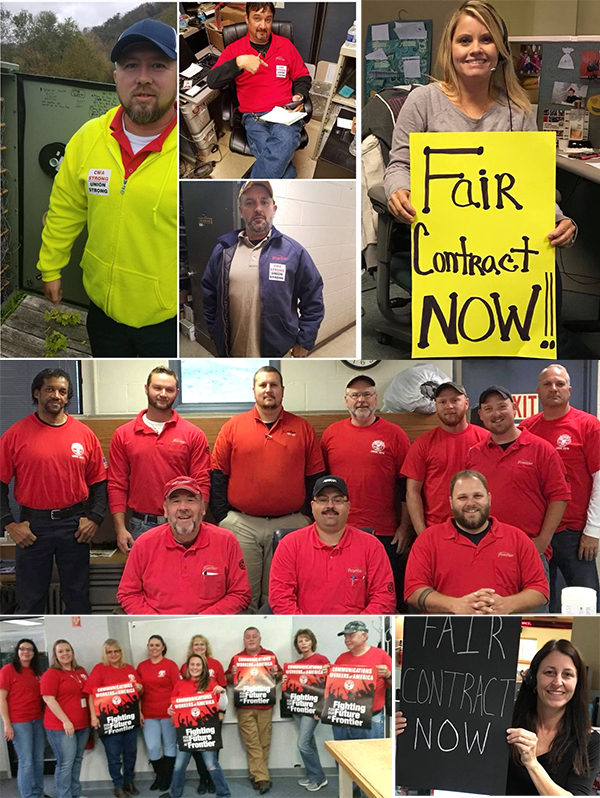 CWA Local 1014 and the Camden County Library Commission reached a tentative agreement on October 25 that will increase the minimum hourly wage for the lowest paid Local 1014-represented position to $15, effective 2019. This will nearly double workers' wages from the current hourly minimum rate of $8.92. The agreement caps a two-year campaign by the local to fight for fair wages and a $15 an hour minimum. Members are voting now on the tentative agreement.

In the meeting with Democratic Senators before the news conference, Shelton thanked those elected officials who stand up against the offshoring of U.S. jobs, for paid sick leave for working people, and for holding corporations to their responsibilities to workers.

"The good news is that 17 Senators of this caucus didn't just give those principles lip service but actually took a public stand in support of them by joining with us to lift up workers at AT&T and all workers in this sector. We thank you if you were one of those brave and principled 17 Senators to join Senator Merkley (D-Ore.) in his letter to AT&T management.

"Unfortunately, we are disappointed that in a caucus of 48, 31 Members chose to not stand on those principles with their 17 colleagues and help us hold the line against the offshoring of American jobs, and the further erosion of quality and family supporting jobs in the customer service and retail sectors. We hope that as we continue this struggle that we can get every Democratic Senator to make it clear that she or he will actually stand with us and fight with us to protect and improve these jobs."

The Democratic "Better Deal" plan maintains that government should work for working people, not just millionaires, billionaires, and special interests. Strengthening the ability of working people to join together and negotiate with wealthy corporations is the key to making this happen. The "Better Deal" plan includes reversing the assault on the workplace freedom and rights of public and private sector workers; combating the practice of employers using outsourcing and subcontracting to flout labor laws, and strengthening the NLRB's enforcement of crucial worker protections.

Shelton said, "With Republicans at every level of government working overtime to strip away the freedom of working people to negotiate for better wages and better jobs, working men and women need the Democratic Party's 'Better Deal.' Only by joining together in unions can working people stand up to the CEOs and corporate lobbyists who are keeping wages stagnant, sending jobs overseas and weakening our communities. We commend the Democratic Party leadership for fighting to restore workplace freedom and the ability of working people to stand together for their share of the economic pie." 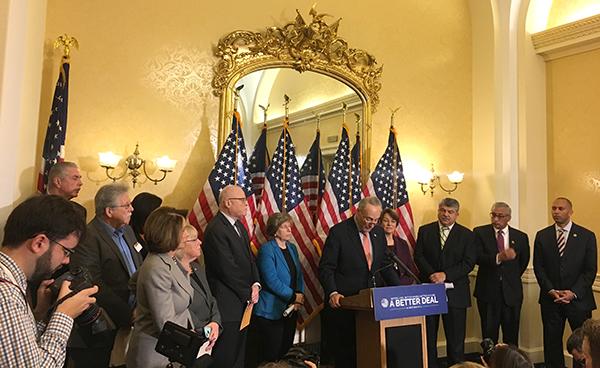 CWA President Chris Shelton authored an op-ed that appeared in the Las Vegas Sun on what the Trump administration needs to do in order to renegotiate NAFTA to help working people:

It's hard to see where the Trump administration's renegotiation of the North American Free Trade Agreement is going, but we do know what a "good" trade deal, one that benefits working people and their communities, should look like.

For millions of working families, NAFTA has meant lost jobs, closed factories and call centers, and lower wages, with most unable to find jobs that provide similar levels of pay and benefits. For communities, it's meant a loss of important public services and cuts in education and other programs as employers abandon cities and towns to relocate out of the country.

Right now, rather than proposing strong labor and environmental provisions that would actually raise wages and standards for workers in all three countries, the U.S. plan includes the same failed labor and environmental provisions included in the rejected Trans-Pacific Partnership and other deals. That means that labor violations — like wage theft, excessive forced overtime and even child labor violations — can't be addressed unless they are both "sustained and recurring" and committed "in a manner affecting trade," an impossible standard to meet. 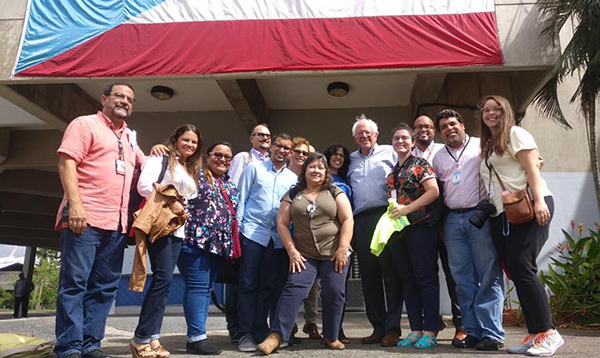 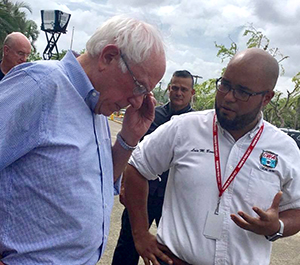 CWAers have been mobilizing in support of pro-worker candidates for New Jersey and Virginia state elections next Tuesday, November 7.

CWAers knocked doors across New Jersey this weekend in support of Phil Murphy for Governor. 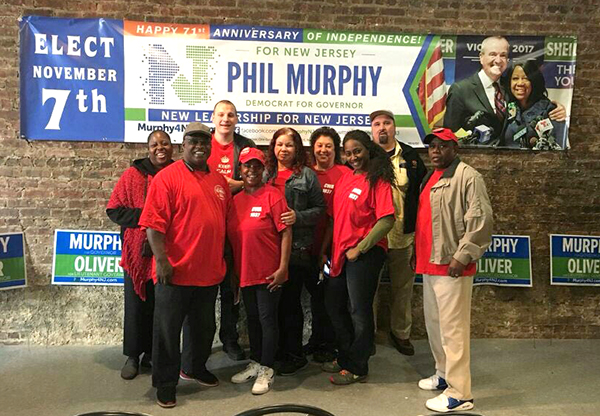 CWAers preparing to knock on doors for Murphy in Middlesex County. 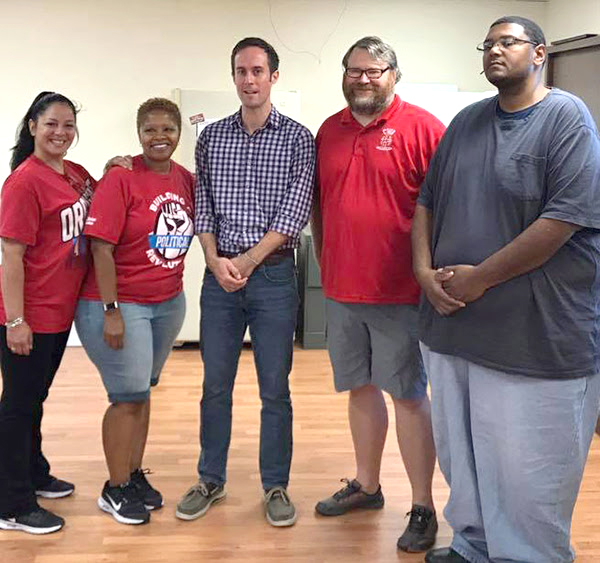 CWAers are working hard to elect Ralph Northam for Governor of Virginia.
Pictured: Members of CWA Local 2201 in Richmond, Va., with Schuyler Van Valkenburg, center, the CWA-endorsed candidate for the House of Delegates, District 72, before heading out for a precinct walk.

Congress Votes in Middle of the Night to Gut Consumer Protection

Republicans in the U.S. Senate, with the help of a tie-breaking vote from Vice President Mike Pence, held a late-night vote to overturn a Consumer Financial Protection Bureau (CFPB) rule that cracked down on the usage of mandatory arbitration clauses by financial firms, harming consumers.

After Equifax recently announced that the personal information of 143 million consumers had been leaked in a massive data breach, the company drew immediate public ire for initially inserting a forced arbitration clause into their credit monitoring sign-up agreement to deny people their right to sue or join a class action lawsuit.

Banks have used similar "forced arbitration" clauses buried in the fine print of contracts to stop consumers from holding their banks accountable when the bank rips off a consumer.

Working men and women are routinely denied their day in court due to forced arbitration clauses, and Equifax was not the first galling example. Santander Consumer illegally repossessed the car of Charles Beard, a national guardsman on duty in Iraq, and threatened to have his wife arrested if she didn't turn over the keys. There was a forced arbitration clause hidden in his contract, so he was unable to sue Santander for this violation of the Servicemembers Civil Relief Act (SCRA).

In July, the CFPB issued a new rule to stop banks from using forced arbitration clauses to block class action suits. Many Republicans in Congress got right to work doing the Wall Street banks' bidding. The House passed a "Congressional Review Act" resolution to overturn the CFPB's rule, and the Senate passed it this week in a late-night vote with very little media scrutiny.

This GOP vote was a victory for Wall Street lobbyists, who mounted an enormous pressure campaign on the Senate to try and pass this harmful resolution into law. Given the rampant abuses and failures routinely seen in the finance industry—from Equifax to Wells Fargo to Santander—it’s no wonder that these lobbyists want a “get out of jail free” card.

Wall Street banks have managed time and time again to get a special set of rules that benefit them. From the bank bailouts to Wall Street’s numerous tax loopholes to their ability to use forced arbitration clauses to facilitate their abuses, Wall Street has gotten preferential treatment for far too long.

Learn how CWA is fighting back here.

Save the Date for this Labor Safety and Health Conference

The National Coalition on Occupational Safety and Health is holding its annual conference Dec. 5-7 at the Maritime Institute near Baltimore, Md.

This national conference brings together safety and health activists from national and local unions, COSH groups, worker centers, and others in the safety and health movement. It’s a great opportunity to learn about latest developments and initiatives in occupational safety and health that are happening at the national, state, and local level, and to strategize about fighting back against efforts to roll back these protections.