A piece highlighting elected officials' support for AT&T Mobility workers who are fighting for a fair contract appeared in Fortune:

So far, 255 state and local politicians have sent letters to AT&T CEO Randall Stephenson backing the workers, the Communications Workers of America union says. Among the senders are six Democratic senators and numerous members of California’s delegation in the House of Representatives.

"While we are aware of the changes that have taken place in the telecommunications industry, we know that AT&T wireless workers are the driving force behind your most profitable division," 12 members of the Arizona House of Representatives wrote to Stephenson in one recent letter. "They deserve to share in the company's success and growth."

CWA members in West Virginia and Virginia are keeping the heat on Frontier Communications as bargaining continues. The contract extension expires on Nov. 4.

Employees at the L.A. Times are working to join together in the NewsGuild-CWA to improve working conditions, raise pay, improve benefits, and improve worker protections. The newspaper's parent company, Tronc, has responded to the efforts by distributing anti-union flyers and holding meetings to try to persuade workers not to organize.

The L.A. Times Guild organizing committee writes on its newly-launched website: "Tronc has no argument for why Los Angeles Times journalists should not enjoy the same Guild representation – the same voice in our futures – as our peers at other major news organizations. So Tronc is instructing newsroom managers to tell us scary stories about pay cuts, layoffs, strikes, dues and that old standby, that the union is an outsider. The union is, in fact, the creation of a grassroots committee of journalists from the newsroom determined to address years of mistreatment by an out-of-touch corporation."

CWA's Runaway Inequality program has trained hundreds of CWA members – and now a growing number of allies – about the expanding power of corporate America, how that power has harmed working families and resulted in greater economic and racial inequality, and what we can do to upend this power grab.

For decades, corporations and Wall Street have been lobbying to cut taxes on the rich and corporations, eliminate government regulations for the financial sector, and try to damage the power of working people and unions.

Through the Take On Wall Street campaign, CWA and allies are fighting back to get rid of tax breaks for companies that offshore jobs and profits, eliminate the CEO bonus loophole, and make sure that Wall Street pays its fair share.

The Runaway Inequality education program got underway in 2016, and in that first year, 32 CWA activists from New York, Texas, Minnesota, Michigan, and Missouri became member-educators, and have led 42 workshops for 629 CWAers.

This year, the program has expanded into Wisconsin, North Carolina, Indiana, Arizona, and Washington. In 2017, CWA member-educators led 27 Runaway Inequality workshops for 416 participants, and more workshops will be held by the end of the year. Recent CWA training sessions have been held in Indianapolis, Buffalo, Rochester, and New York City.

The program is being expanded to allies across the country. In New York, Michigan, North Carolina, and Minnesota, CWA member-educators have run workshops for participants from allied organizations, including the UAW and other unions, Jobs with Justice, and community groups.

CWA's Michigan Legislative-Political Coordinator, Mike Schulte, organized train-the-trainer sessions for 25 activists from labor, community, faith-based, and progressive organizations from the Detroit area. Most of the participants were members of South East Jobs with Justice Committee; their goal is to educate 800 new activists.

On Staten Island, N.Y., Runaway Inequality CWA Local 1102 member-educators Joe Tarulli and Ray Ragucci have led workshops for over 100 participants and are expanding those sessions to community allies. Local 1102 is part of the Sustainable Staten coalition, a group that grew out of the successful Verizon strike in 2016. 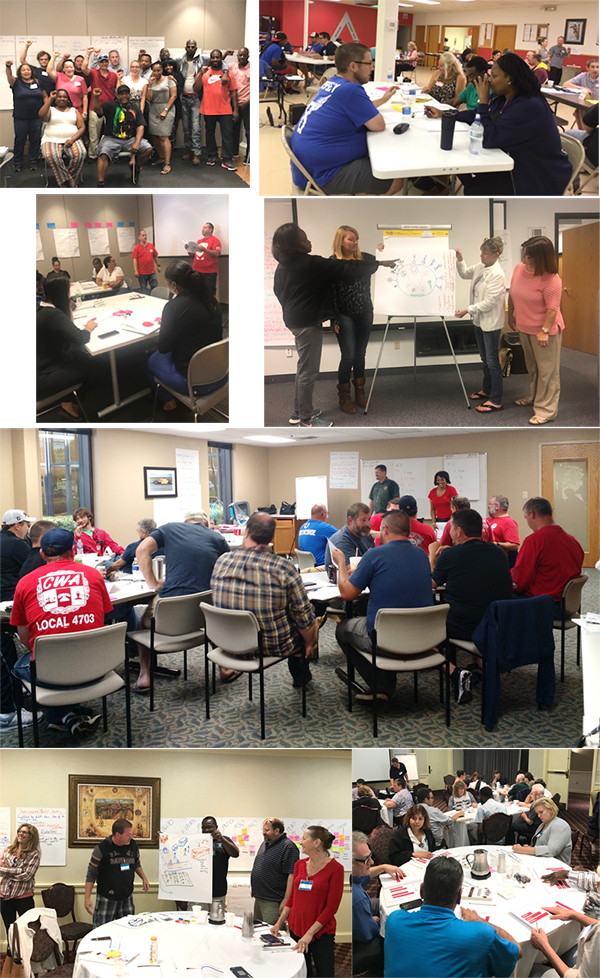 Kristie Veit, president of CWA Local 6137, wrote a piece for the Caller-Times (Corpus Christi, Tex.) about how union members are helping Texans in the wake of Hurricane Harvey:

As president of the local communication workers union, CWA Local 6137, and the Coastal Bend Labor Council, I was especially moved by the stories of those who worked around the clock — even through the storm — to secure and repair our electric and communications systems.

Electricians like Brent Falwell, Kevin Martinez, and Stuart Diegel left their families at home while they worked all day leading up to the hurricane on back-up power plans for the hospital. In the evening, they moved outside, standing guard all through the storm, to monitor power poles that feed electricity to the hospital. I can’t imagine what it must have been like for them to leave their families behind to weather the hurricane while they went out to do their jobs for the greater good of the patients in the hospital.

And when the winds died down, union members did not let up, even as they needed relief of their own. We may be a month out from when Harvey hit, but there is still so much more that needs to be done before working families in the Corpus Christi area can truly recover. Union members like Richard Rock volunteered to help temporarily restore water to a Rockport resident even as he had lived without power in his own home for weeks. This is the very belief that drives the labor movement: We are all in this together.

U.S. Must Seek Strong Protections for Jobs in NAFTA Talks

The Daily Herald (Everett, Wash.) featured a Letter to the Editor by Michael Schendel, president of Washington Alliance of Technology Workers/TNG-CWA Local 37083, on how ongoing NAFTA negotiations must include strong protections for U.S. workers:

Already, the third round of negotiations for the North American Free Trade Agreement (NAFTA) is finishing up, and despite Trump's promises to make NAFTA better for workers, recently his team proposed only weak standards that would do nothing to stem the flow of jobs to wherever workers can be paid the least.

NAFTA and subsequent deals have cost more than 79,000 direct jobs here in Washington State, according to just one narrow government retraining program that for most of its existence didn’t even include service jobs like call centers that were closed and shipped overseas. These job losses push down everyone's wages: NAFTA-style trade has suppressed most Americans' pay by 12.2 percent, according to a new report from the Center for Economic and Policy Research. That means some $3,300 less in their pockets each year for workers earning the median U.S. wage! Workers in Mexico don’t benefit, either, from the dangerous, low-wage jobs that move in and dominate their economy.

ISDS rigs the system by allowing foreign investors and multinationals to challenge local, state, and federal laws before a private panel of corporate lawyers, instead of in a country's court system. The private panel decides if a corporation's "expected future profits" would be harmed by the government action being challenged, and if so, the panel assesses its often multi-million dollars fines against the government. Decisions can't be appealed. 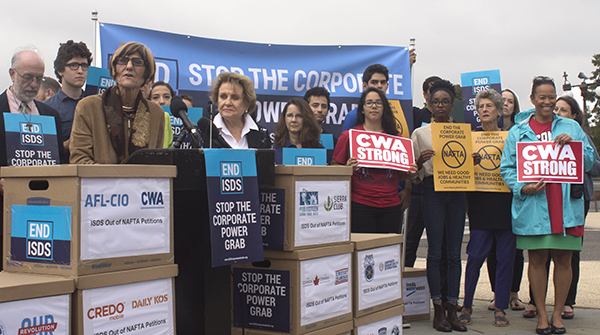 CWAers joined Members of Congress, including Reps. DeLauro (at the podium), Kaptur, Slaughter, Ellison, Dingell, Cicilline, Kildee, and Schakowsky, at a rally to remove ISDS from NAFTA.

CWA to FCC: Mobile Service Not an Adequate Substitute to Robust Wireline Broadband

CWA submitted to the Federal Communications Commission (FCC) an expert report that demonstrates that wireless technologies are not adequate alternatives to robust wireline broadband. The report was prepared by engineers and analysts of CTC Technology & Energy.

CWA submitted the report in response to the Commission's annual inquiry about whether broadband is being deployed in a timely fashion. In that inquiry, the Commission seeks comment on whether wireless broadband is comparable to wireline broadband, and proposes to downgrade the definition of advanced broadband service from its current 25 Mbps/3 Mbps (download/upload) speed to 10/1 Mbps speed for wireless.

The report conclusively finds that mobile and wireline broadband have been – and will continue to be – essential, complementary services. Americans who have access to only one service – wireline or wireless – will face significant disadvantages relative to their peers.