CWA AT&T West members ratified a contract covering 17,000 workers in California and Nevada by a 58 to 42 percent vote.

Workers at AT&T Mobility have gained media attention in the recent weeks as their fight for a fair contract continues.

Six months ago, Kanika Holloway, a mother of three in Ridgeland, Miss., lost her job after AT&T closed the call center where she had worked for more than 15 years. Since then, Holloway has struggled to find a job where she can still keep up rent payments and stay in-network with her kids' pediatrician.

Her story is not unique. In the last six years, AT&T has cut more than 12,000 jobs and sent them offshore. It is a leader in the pack of corporations that continue to offshore lower- and middle-income American jobs, even at a time when Americans are paying close attention to who creates and maintains U.S jobs. By choosing to shutter more than 30 call centers in the U.S., AT&T has pulled hundreds of jobs from small rural communities and urban centers.

The Niagara Gazette wrote about how elected officials in New York are supporting AT&T Mobility workers. Read it here. 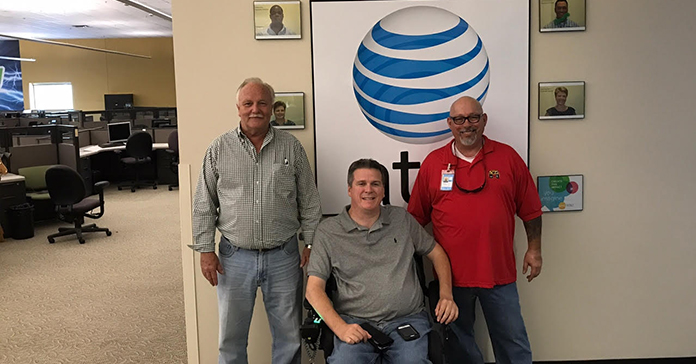 As part of the AT&T Southwest contract that CWA negotiated and members ratified earlier this year, AT&T agreed to bring back 3,000 jobs to the district. CWA and other unions bargain and work hard to keep good union jobs in the U.S. and to press employers to expand those jobs here. It takes a lot more than talk.

AFA-CWA Flight Attendants and supporters leafleted outside more than 13 airports last week in support of Mesa Airlines Flight Attendants. Their goal: to let passengers know that Mesa operates many regional flights for American Airlines and United Airlines, but that Mesa Flight Attendants who do the same work as at mainline carriers earn close to the federal minimum wage of $7.25 an hour, while Mesa pockets the difference.

Negotiations for a fair contract for Mesa Flight Attendants are being overseen by the National Mediation Board. 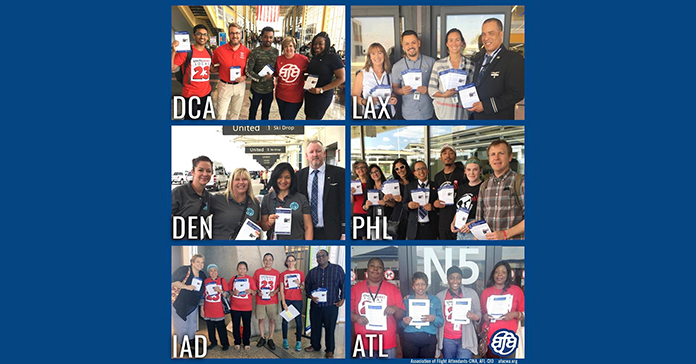 CWA President Chris Shelton wrote for The Hill about how Congress can act to keep good call center jobs here in the U.S:

The loss of a call center means the loss of a pillar of the local economy for many communities. Lost jobs mean lower tax revenues to fund important public services. And when companies offshore U.S. jobs, it puts more pressure on workers at home to accept lower wages and benefits, and poorer working conditions. U.S. workers shouldn’t have to compete with overseas operations paying around a dollar an hour and forcing employees to work 12-hour days, or longer.

There is a solution. Last week, Congressional Democrats unveiled policy details of their “Better Deal” agenda, including support for crucial legislation, the U.S. Call Center Worker and Consumer Protection Act, which would help rein in the practice of offshoring call center jobs from America.

Just one week after the session, a member of Local 6210 was working alone in an attic and then outdoors for several hours. The average temperature for the day was 95 degrees Fahrenheit. The member initially reported feeling hot and nauseous to management, but continued working while again notifying management that his symptoms were not going away and assistance was needed.

The member contacted the steward who attended the safety and health training, who advised the member to seek water, rest and shade. On arrival, the steward determined that emergency services were needed and called 911; the member was hospitalized and hasn’t yet been authorized to return to work.

Local 6210 President Dwayne Webb encouraged all CWA members to participate in safety and health training, stressing that his member’s life was saved as a result of the session.

Save the Date for Health, Safety, and Environment Conference

The CWA/USW Health, Safety and Environment Conference will be held March 26-30, 2018 at the Westin Convention Center in Pittsburgh, Pennsylvania.

Delivering a win for workers fighting for CWA representation at StoryCorps, a nonprofit that collects oral stories, the NLRB approved a union election for StoryCorps workers, finding that the 24 employees fit the criteria for a bargaining unit. The company has engaged in an aggressive anti-union campaign.

At this year’s Netroots Nation conference in Atlanta, Ga., progressive activists from across the country met for four days of organizing, brainstorming, and great speakers.