CWA President Chris Shelton: When We Fight, We Win 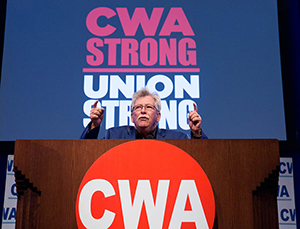 In his keynote address to the 76th CWA convention in Pittsburgh, CWA President Chris Shelton laid out the intensifying attacks facing workers and the labor movement, but reminded delegates that "always, always, always, working people have risen up to fight for what is right."

"Our work is cut out for us. But let me tell you this: I am 100 percent confident that we are up to the task. I have spent my entire adult life building this union. I know what CWA is made of. I know that every one of you will do whatever we have to do to save our union and to save our labor movement. I know that we are CWA STRONG and that nothing, nothing can break us!" 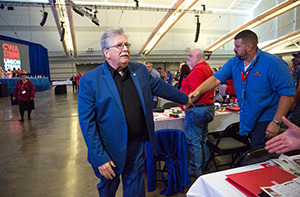 President Shelton hits the convention floor after his keynote speech.

Shelton outlined the CWA STRONG program and noted that locals already are putting this plan into action. "Step 1 for CWA STRONG is increasing membership levels. Step 2 is more mobilization and member engagement. Across this union we must renew our commitment to building our union from the bottom up. At the same time, we must continue to reach out to our community allies who will stand with us against our enemies. A stronger CWA means a stronger foundation for a progressive movement. Locals, large and small, are working hard to sign up agency fee payers and non-members in both the public and private sectors."

He recognized CWA members and activists who walked picket lines and stood with striking workers at AT&T, AT&T Mobility and Verizon, and at Momentive.

For a full video of the speech, click here.

CWAers from more than 371 locals at the CWA Convention took the pledge to make locals CWA STRONG, with more signing up every day. Convention delegates adopted the far-reaching CWA STRONG plan to strengthen our union at all levels and build our capacity to survive and fight back.

Under the CWA STRONG program, locals and activists are building our union by talking with and signing up non-members, stronger organizing committees, recruiting new stewards and activists, participation in political boot camps, and more.

The plan calls for CWA locals at or below 80 percent organized, with support from the districts and the national union, to increase membership by 10 percentage points this year; for all locals to have active and effective organizing, legislative-political, and human rights committees and participate in boot camps and other trainings, and to build and strengthen the workplace mobilization structure, among other actions. 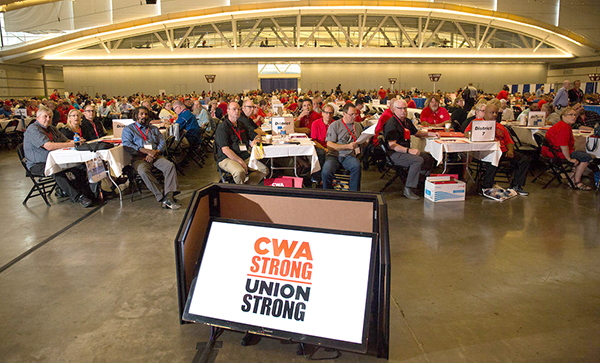 CWAers from more than 371 locals at the CWA Convention took the pledge to make locals CWA STRONG. More are signing up every day.

In addition to CWA STRONG, delegates to the 76th convention adopted several resolutions – putting the Trump administration on notice that working families and CWAers are holding negotiators accountable for the promises made about NAFTA; calling for the increased engagement and mobilization of call center members; standing for equitable tax policies that make the wealthy and corporations pay their fair share, affirming CWA opposition to Islamophobia and all discrimination, and other critical issues.

Read all the adopted resolutions here.

Delegates also adopted policies, reports, and actions to keep our union moving forward, including reports from the National Committee on Civil Rights and Equity and the National Women's Committee.

See photos from the convention here.

The site will be updated, so check back often.

CWA Secretary-Treasurer Sara Steffens told delegates that "the Secretary-Treasurer's office is working hard to protect our resources, not only our financial and physical assets but also the unity that binds and sustains us." Read her full remarks here.

Delegates also heard from Pennsylvania Governor Tom Wolf (D) and Andreas Franke of ver.di, whose members are standing with T-Mobile US workers in the fight for a CWA voice, among other speakers.

Locals were recognized for their support for CWA's Political Action Fund and for fund-raising on behalf of the Pediatric AIDS Foundation. 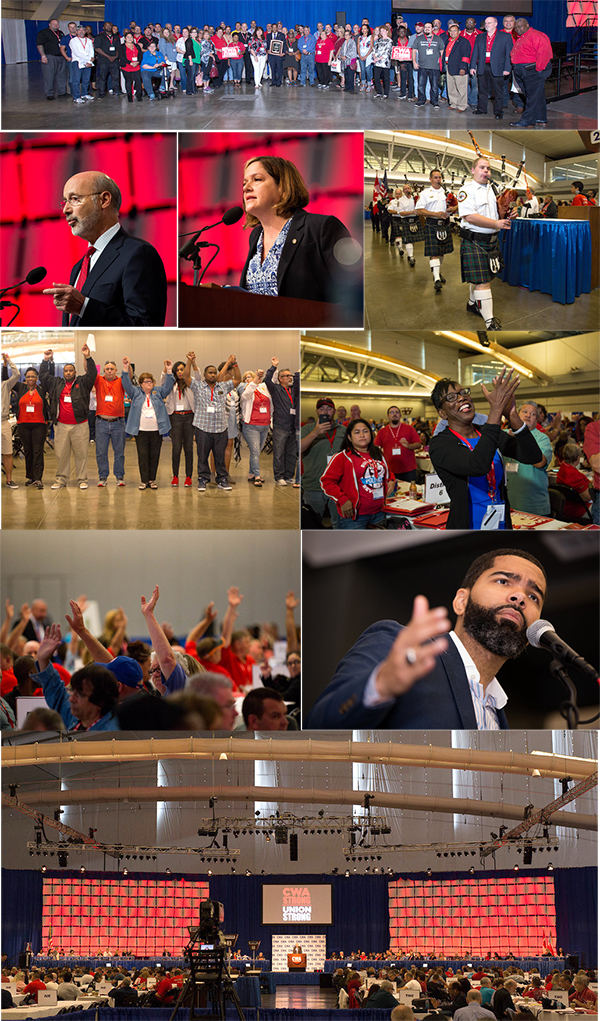 The CWA President's "Hat" Award, honoring outstanding achievements in organizing, was presented to CWA Local 3905 for their work building a strong, statewide unit of DIRECTV workers.

President David Betts accepted the award on behalf of all his members, especially the DIRECTV workers who stepped forward to meet the challenge of building a new unit, and thanked District 3 for its strong support. Local 3905 coordinated efforts with other Alabama locals to organize a statewide unit of 240 technicians.

The Hat Award is named for CWA's founding president, Joe Beirne, and is CWA's highest honor. 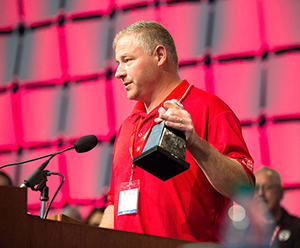 On behalf of his members, Local 3905 President David Betts accepts the Hat Award for organizing DIRECTV in Alabama.

CWA Organizing Director Sandy Rusher reported that since the last convention in 2015, more than 17,000 new members have joined our union through external organizing efforts.

Despite the fact that many of our largest employers have been shrinking our bargaining units, our union has grown over the past two years because of the organizing our locals have done, she said.

Carolyn Wade, at-large executive board member and president of CWA Local 1040, recognized the 41 locals that organized at least 100 workers in either one or both of the past two years. Each local will receive a $1,000 organizing subsidy; five time winners will receive $5,000.

CWA Canada President Martin O'Hanlon announced to CWA delegates that CWA Canada Local 30130 bargainers have reached a tentative agreement covering the 50 newspaper workers who have been on strike at the Halifax Chronicle Herald for 18 months.

The 110 news workers at Team Video Services and CNN who have been fighting for their jobs and union rights since 2003 just won a big legal victory. The federal appeals court for the D.C. circuit upheld the NLRB’s decision that CNN discriminated against TVS employees when it instituted a new hiring process and hired only non-union workers. The court also ruled that CNN is a successor employer and obligated to recognize NABET-CWA Locals 51011 and 52031 in New York and Washington, D.C., as the workers’ bargaining representative. NABET-CWA President Charlie Braico told delegates that it might take time, but "when we fight we win." 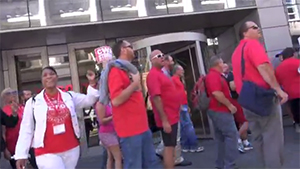 President Shelton and Secretary-Treasurer Sara Steffens joined CWAers at the "Our Jobs are Not for Sale" rally at JLL.

In Pittsburgh, CWA delegates joined members of United Campus Workers Local 3865 outside the Pittsburgh headquarters of Jones Lang LaSalle (JLL), a real estate company that Tennessee Governor Haslam secretly signed a contract with to privatize thousands of state jobs, including jobs at the University of Tennessee. CWA President Chris Shelton and Secretary-Treasurer Sara Steffens joined the "Our Jobs are Not for Sale" rally.

CWA Vice President Lisa Bolton, Telecommunications and Technologies, reported that CWA members and retirees at Avaya have some breathing room in their fight to keep the secure retirement at Avaya that they've bargained for over decades.

On July 25, Avaya announced that it had reached a deal with the Pension Benefits Guaranty Corp., a federal agency, in connection with the pension plan covering salaried (non-union-represented) workers. A bankruptcy court hearing will be held on Aug. 15 to approve this step. The plan covering CWA members is not affected by this agreement and remains in force.

The Pittsburgh Post-Gazette wrote about how AT&T's use of third-party dealers is harming workers and lowering customer service quality for consumers. Some highlights of the article:

AT&T and Verizon, along with rivals Sprint and T-Mobile, have increased their sales in recent years by appointing third-party dealers to open new retail locations selling their cell phones and other products.

In the case of telecom companies, the system is confusing some customers and drawing barbs from unions who see authorized retailers as rogue entities with little accountability for customer service and worker standards.

Because of different sales systems, it is possible that a phone purchased at an authorized retailer can not be returned to a corporate store or another authorized retailer. But because the stores are often set up to look similar, some customers don't know they are talking to another company’s employee.

For the union representing AT&T workers, the debate — which has gone on for years — gets a little more heated during contract negotiations like the ones going on now. The Communication Workers of America is bargaining for a new contract on behalf of 21,000 AT&T wireless employees, who see authorized retailers as an existential threat to their jobs in corporate stores.

A few weeks ago, the union released a report and set up a "consumer alert" website highlighting the issue of authorized retailers offering different levels of service.

In a poll of its members who work at corporate stores and call centers, 76 percent reported that customers came to them with "problems caused by third-party stores multiple times per week." In addition, 83 percent responded that third-party stores are referring their customers to corporate-owned stores when a service issue arises.

"There's no standardized training method, there’s no accountability from the AT&T side," said James Stiffey, a retail sales consultant for AT&T for six years who works in the Cranberry corporate store. He said he sees several customers a week who are upset or confused at the nearby Wexford store, operated by an authorized retailer.